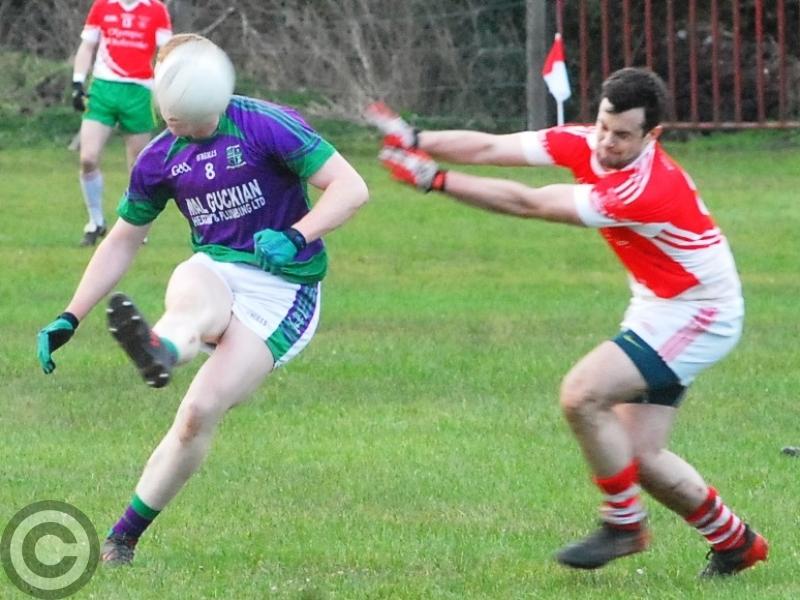 Who is it? A partially obscured Colm Moreton delivers a long ball against Ballinaglera last Saturday. Photo by Willie Donnellan

The more things change, the more they stay the same as Mohill and Glencar/Manorhamilton are again setting the pace in the Dunnes Bar Division 1 last weekend.

The big two of Leitrim League  football of recent years sent out strong messages that they will be at the business end of the Dunnes Bar Division One with impressive wins in the second round of the League.

And Ballinamore Sean O’Heslin’s maintained their strong start to the League with a hard fought win over Melvin Gaels, three second half goals making the difference.

Glencar/Manorhamilton ran up a quite extraordinary score of 6-16 when defeating last year’s Intermediate Championships Aughnasheelin. Shane Ward’s well drilled team have obviously hit the ground running as they hit 3-11 in the first half on their way to a comprehensive 6-16 to 0-9 victory.

Defending League champions Mohill have made light of a change in manager and the loss of the experienced Ronan Gallagher and Darren McLoughlin as they defeated Aughawillan 2-11 to 0-11.

Ballinamore’s meeting with Melvin Gaels was a much closer game than the 3-9 to 0-11 scoreline suggests as it was tit for tat in the first half, Sean O’Heslin’s leading 0-8 to 0-7 at the halftime break with Peter Reynolds leading the way.

The second half saw O’Heslin’s score just one point but it was the three goals they netted that did the damage. Keelan McHugh’s goal early in the half gave Ballinamore an advantage before Mark McGrory struck twice in the last 15 minutes to seal the win.

The result leaves Melvin Gaels rooted to the bottom of the table on scoring difference but they will look to get back to winning ways when they host St. Mary’s Kiltoghert in their home game of the campaign. The Carrick men scored an important 3-8 to 0-12 win over Fenagh St. Caillin’s.

The Fenagh men saw a fifth player make their adult League debut when Aaron Smith played against the Carrick men who recovered after a first round loss to Mohill.

Drumkeerin are just ahead of Melvin Gaels on scoring difference after they lost their second game of the campaign, a seven point reverse to Gortletteragh who are fourth in the table following their 1-13 to 1-6 victory over the north Leitrim men.

Leitrim Gaels, who didn't win a game in their last sojourn in Division 1 until the final round, didn't wait as long this time as they defeated Ballinaglera by two points.

The final round of Division 1 & 2 games will take place this weekend before the League is suspended due to Leitrim's preparations for the Connacht Championship clash with New York on Sunday, May 6, with the next round of games to be played without County players on the weekend of May 19/20.

There are some interesting clashes - Melvin Gaels will hope to make home comforts count while Leitrim Gaels host double champions Mohill in a real test for the newly promoted side. Drumkeerin are at home but face a difficult task in trying to stop Sean O’Heslin’s.

Aughawillan and Glencar/Manorhamilton look like the tie of the round while the meetings of Fenagh St. Caillin’s and Ballinaglera and Aughnasheelin against Gortletteragh are intriguing.