St. Mary's lay down a marker for the future 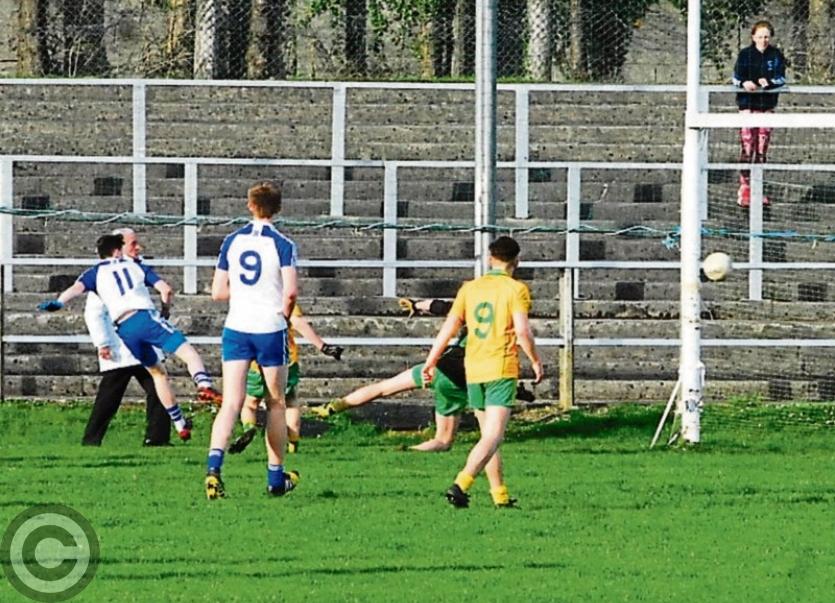 An airborne Sam Barnes gets St. Mary's off to a flying start with the first goal of last Friday's U17 League 15-a-side Final in Pairc Sean Mac Diarmada. Photo by Willie Donnellan

It has taken time but St. Mary's return to their roots looks as if it may be about to pay rich dividends in the future as their U17 team stormed to the League title.

St. Mary's Senior success in the 1990s and 2000s was built on the back of complete domination of underage football in Leitrim in the 80s and 90s, producing a conveyor belt of talent that eventually led to Senior titles in 1995, 2003 and 2007 and 2013, having one just one title before then.

The Carrick team's underage structure faltered badly since those glory days but a concerted effort to revitalise their underage structures, all the way from U6 is beginning to bear fruit and other Leitrim club should learn the lesson.

In this final, St. Mary's were just as dominant as they have been all season, their winning margin of 13 points compared with their average of 22.8 points. In fact, Ballinamore Sean O'Heslin's held them to five points in the group stages but they couldn't live with the Carrick men in this game.

It is hard to know if this is simply an exceptional Carrick team or if the standard is weak in this age group but they look like a good bet for the championship crown and if St. Mary's can keep this squad together, along with the talent charging through behind them at U13 and U15 level, they should be a major force in the years ahead.

Despite the defeat, Sean O'Heslin's showed enough individual talent to suggest that they won't be too far away in the years ahead either, particularly when these new players join what is a already very young Senior team.

It took a while for this game to get going with both sides missing four chances before Sam Barnes opened the scoring in spectacular fashion on 10 minutes, a bullet like finish from a tight angle to get Mary's up and running.

Ballinamore seemed shell-shocked and after a Barnes point, Oisin Bohan out-jumped a defender and keeper, his touch putting the ball in the net. Adam Reynolds and Bohan added points before a long free out of defence saw Bohan round his man and finish low to the net on 21 minutes.

A stunned Ballinamore did rally but it took time. A rather soft penalty from Sean Christy was brilliantly saved by Sean Reynolds, the unfortunate Christy touching the rebound on the ground.

David O'Connell put over a long free but just before halftime, a fantastic run from Tom Prior saw him beat three defenders to blast a great shot to the Mary's net. And a minute later, a clear foul on Christy ended with Paul Moran drilling the spot kick to the net.

That left St. Mary's 3-4 to 2-0 ahead at the break and Christy opened the scoring with a good point. Carrick, however, were in no mood to leave the door open and Diarmuid Kelleher's hard running led to two points, one of which was deflected over the bar by keeper Jakub Kaminski.

Conor Hackett, Kelleher and Bohan added points by the 13th minute before Bohan got his hat-trick, a break leaving O'Heslin's exposed as Bohan's shot was deflected into his own net by a defender.

St. Mary's completed their scoring when a poor kickout left O'Heslin's exposed, Bohan with an easy goal on 17 minutes. With St. Mary's emptying the bench, Ballinamore fared a bit better and Barry McWeeney saw a shot hit the crossbar while Sean Reynolds made a fantastic save when he blocked Christy's close range shot at the expense of a fifty but Sean O'Heslin's got a late consolation goal when Dillon Beirne finished well from close range.

Talking Point: Underage football in St. Mary's was neglected for some time but this win, allied with a win for their U13s, suggest that if their Seniors can hang on for a few years, the glory days might be on their way back.

Turning Point: No real turning point as such as St. Mary's started very strongly but just didn't score for the first ten minutes. But when Sam Barnes blasted  to the net, the game was as good as over.

Ref  Watch: Enda Egan didn't have a lot to do but did miss a few  frees for both teams and awarded one penalty that was incredibly soft.

Lowlight: From a county point of view, St. Mary's complete dominance in this grade is great for them but perhaps a worry when looking at future county sides.