Kinlough look to make their Mark on the Park 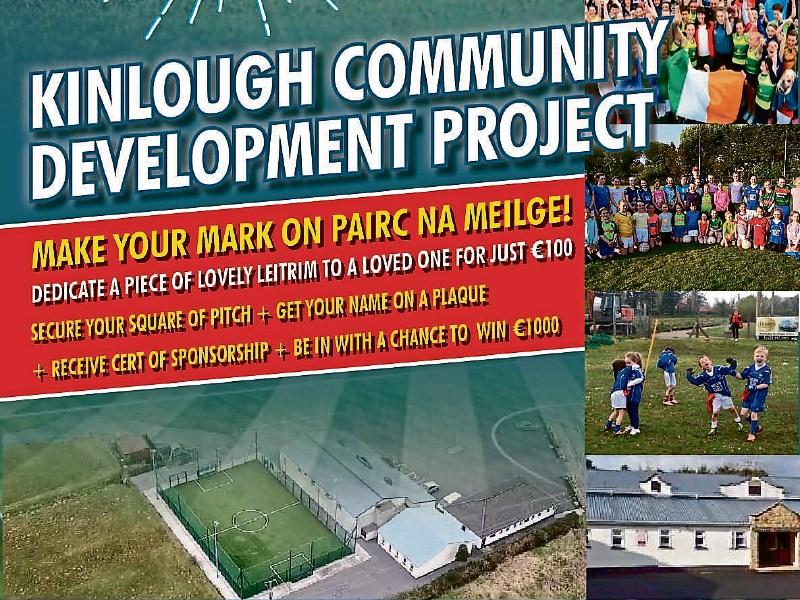 One of the fastest growing areas in Leitrim, Kinlough is coming together to launch a unique fundraising that is asking the community to “Make their Mark on the Park”.

Next Saturday evening, May 12, the people of Kinlough come together for the launch of Kinlough Community Development project, a far reaching and ambitious plan that seeks to development and improve Melvin Park.

A veritable who's who of life in Kinlough will be present for the launch including Olympian Breege Connolly, Leitrim Observer columnist Colin Regan, former IDA Chairman Padraig White and, depending on club games this weekend, Leitrim Senior star Emlyn Mulligan.

Although known as the home pitch of Melvin Gaels GAA club, Melvin Park is part of the Kinlough Community Centre facilities which features a hall, an astro-turf facility, two football pitches, one of which includes a walking/running track around the perimeter.

For most areas, those facilities would be more than enough to cater for the needs of the area but Kinlough and the surrounding area that includes Tullaghan have undergone a massive transformation in recent years.

With its proximity to both Sligo and Donegal, Kinlough’s population has boomed, going from 305 residents in 1991 to an incredible 1082 in the 2016 census while the number of pupils attending the local Four Masters National School has gone from 100 pupils in 1985 to 283 pupils during this year.

It is an incredible change in numbers and naturally that puts huge pressure on the amenities in the area, most notably the Kinlough Community Centre which is the heartbeat of the local community.

The Community Centre encompasses a large hall with a stage, two separate meeting rooms (one currently being used as a small gym area), a kitchen, an office, toilets and some store rooms. Then there is a separate building with dressing rooms and showers.

New public toilets have been completed recently. The football pitch and training pitch are also on site and a new Astro Turf Pitch was opened in June 2015.

Currently the Community Centre & Pitch is used regularly for weekly classes and events such as Karate, Irish Dancing, Football Training and various meetings. Weekly there is also a very well attended Bingo Game. One room is rented on a full time basis by Gareth Phelan, who runs a gym/physio space.

On an ad hoc basis other events are held such presentations, concerts and fund-raising events. All of this is run by this voluntary committee, who open, close, set up and organise between them.

The Astro turf is also doing exceptionally well. A separate account was opened to save the money collected form this hiring so that funds would be available to repair and redo. It was expected to need €30,000 in ten years time. After two years €15,000 has already been collected.

The Pitch (Pairc na Meilge/ Melvin Park) is owned by the Kinlough Community Development Co Ltd. It is predominantly used by Melvin Gaels GAA Club, but not exclusively – it is a Community Pitch. Melvin Gaels GAA Club maintains the pitch areas but lots of other groups use the pitch regularly including the Four Masters National School, local Preschools, Athletics, Community Games, Festival Committee, Walking Groups and Soccer.

The aim of the project is to realign the pitch and complete works to the corner of the car park to reclaim some area to square off the pitch to a 140 x 85m playing surface. They also hope to drain, reseed and complete a new sand based playing surface along with the erection of new goalposts and ball stops, the completion of new fencing with a path around the park.

The local committee are hoping to raise €100,000 towards the redevelopment and extension of the field and the effort starts next Saturday. So if you are from Kinlough and the surrounding areas, get down to the Community Centre for the start of a bright new era for the Kinlough community.