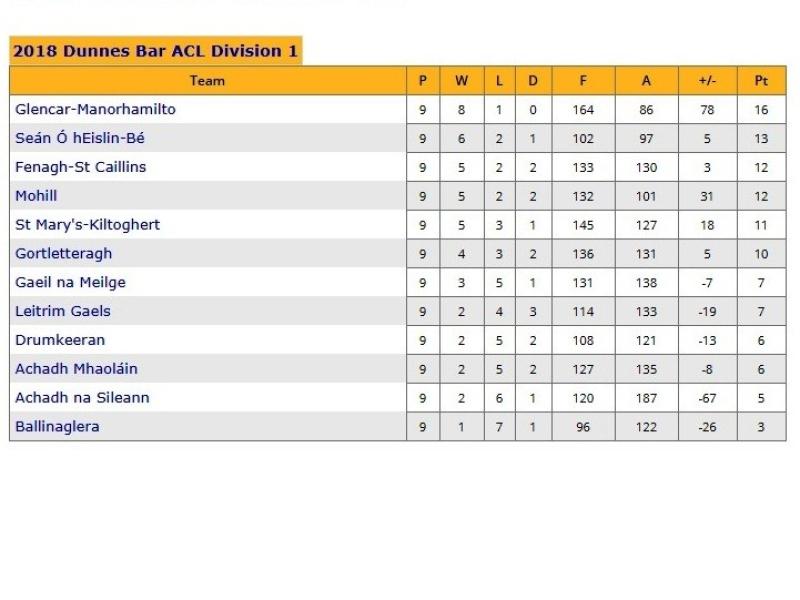 After their first blip of the season against Mohill, Glencar/Manorhamilton resumed their dominance of the Dunnes Bar Division 1 campaign when they had eight points to spare over Leitrim Gaels, all but guaranteeing their place in the final.

As it stands, the north Leitrim men are three points clear of Ballinamore Sean O’Heslin’s after their 1-12 to 0-7 win over Leitrim Gaels and four points clear of Fenagh St. Caillin’s and Mohill with two games to play.

It means that a point against St. Mary’s next Saturday in Pairc Naomh Mhuire or even against Drumkeerin in their final game would book their place in the final. They would need to lose both games and suffer enormous losses to affect their scoring difference as both Fenagh and Mohill can only match their total of 16 points.

Ballinamore Sean O’Heslin’s got back to winning ways with a three point win over Ballinaglera, 1-12 to 1-9, a result that leaves Glera stuck to the bottom of the table with just three points.

But Ballinamore are unable to relax for their final games against Gortletteragh and Fenagh St. Caillin’s as they are just a point ahead of their neighbours and Mohill. Fenagh had a comprehensive win over Aughnasheelin in their derby, winning 2-15 to 0-10 to move into third place.

Mohill have a superior scoring difference and the same number of points after their 0-10 to 0-6 derby win over Gortletteragh but by virtue of the head to head, Fenagh are in third.

Mohill face Drumkeerin next Saturday and then take on Ballinaglera in the final game so they would be odds on to make 16 points while Fenagh take on Aughawillan and Ballinamore face Gortletteragh this weekend.

The big game could very well be the last round meeting of O’Heslin’s and St. Caillin’s where both teams may just need a win to reach the top two. If both teams win next Saturday and so do Mohill, Ballinamore will need the win to stay ahead of Mohill and Fenagh the win to leapfrog their neighbours!

At the bottom of the table, it is no less intense with Ballinaglera on three points and then just two points covering five teams. Aughnasheelin have five points after their loss to Fenagh while Aughawillan’s 2-11 to 1-14 draw with St. Mary’s Kiltoghert was enough to move them out of the drop zone.

Drumkeerin also jumped out of the zone with a 1-9 to 1-7 win over Melvin Gaels, a loss that drags the Kinlough men into the relegation battle while Leitrim Gaels are back in the mire after their big loss to Glencar/Manorhamilton.

There are some huge games left with Ballinaglera and Aughnasheelin meeting this Saturday, a game that could relegate Glera, while the clash of Leitrim Gaels and Melvin Gaels could see the winner safe and the loser in a battle for survival.

The last round of games, which looks as if it will be played after the Championship, features no easy contest - Melvin Gaels take on Gortletteragh; Leitrim Gaels face St. Mary’s Kiltoghert, Ballinaglera travel to Mohill, Fenagh face Ballinamore at home while Glencar/Manorhamilton travel to Drumkeerin and Aughnasheelin host Aughawillan.