Annaduff in danger as Allen Gaels and Dromahair scent blood 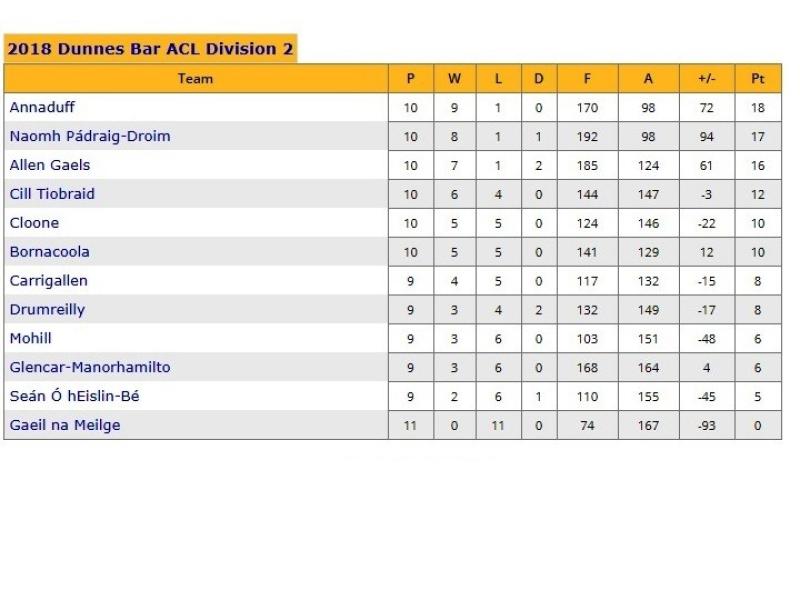 It is hard to imagine that after going nine games unbeaten in the Dunnes Bar Division 2 campaign, Annaduff are actually in danger of missing out on promotion with St. Patrick’s Dromahair and Allen Gaels scenting blood in the water.

The worst possible result of a draw between the Drumshanbo and Dromahair men have opened up the possibility of Annaduff missing out as they face both clubs in their final two games.

And the first part of that came to pass when the Drumshanbo men triumphed 3-8 to 2-9 last Saturday in Drumshanbo. The game actually started well for Annaduff as a goal from Gavin O’Brien put them into a 1-4 to 0-1 lead after just 11 minutes.

But two Allen Gaels goals in the final ten minutes of the half had them in front before an Alan Glancy penalty left Annaduff with a 2-4 to 2-3 halftime lead. Annaduff went two up but a goal three minutes into the second half for the Gaels saw them take control.

The sides were level with less than two minutes to go and a point would have been enough for Annaduff, also ending Allen Gaels’ hopes, but the dismissal of Keith Duignan on two yellows late on saw the Drumshanbo men take full advantage to hit two late points.

With St. Patrick’s Dromahair delivering a big 3-18 to 0-8 beating to a Drumreilly team they will meet in the first round of the Senior Championship in just over a week, the table sees Annaduff on top with 18 points, Dromahair second with 17 and Allen Gaels on 16.

The final round of games takes place this weekend and the game that could decide everything is the clash of Annaduff and Dromahair in Annaduff. The winner of this game is promoted and the loser will be consigned to Division 2 for 2019.

An Allen Gaels win almost certainly see them promoted regardless of who win the other game - the only way they could miss out is if they win and Dromahair draw with Annaduff, leaving them both level on 18 points and the head to head a draw. In that case, the vastly superior scoring difference of the north Leitrim men would see them promoted.

It means everything hinges on the meeting of Annaduff and Dromahair.

At the bottom of the table, relegation has become a battle of the second string teams - Melvin Gaels are already gone but Ballinamore Sean O’Heslin’s, who gave a walkover to Kiltubrid, are on five points with Glencar/Manorhamilton and Mohill on six points.

Ballinamore take on Carrigallen, Mohill face Drumreilly and Kiltubrid take on Glencar/Manor as thoughts may firmly be on the first round of the championship rather than the last round of the League this weekend.