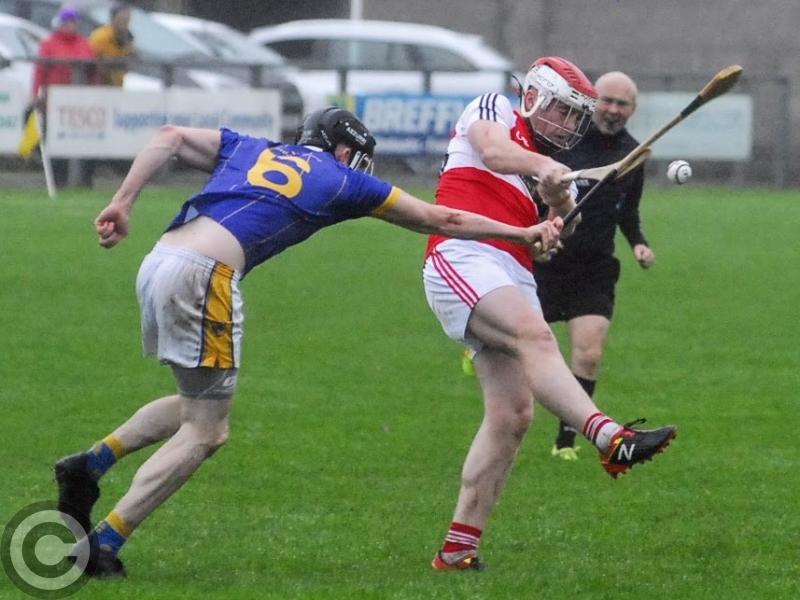 Two goals from man of the match Stephen Goldrick were enough to see a lacklustre Carrick-on-Shannon over the line in Saturday's Leitrim Senior Hurling Championship Final against a Cluainin Iomaint side that will be cursing their own inaccuracy.

In a low scoring but intensely committed decider in Pairc Sheain Ui Eslin, a goal in each half from 17-year-old Goldrick proved the difference on the scoreboard as Carrick retained their Senior hurling crown.

Going into the game as favourites, Carrick were forced to play second fiddle for long periods to a wonderfully committed Cluainin as their immense appetite for battle, work-rate and ferocious desire saw them boss most of the general exchanges, particularly in the persons of Karl McDermott, Niall McLoughlin, Kevin Clerkin, Declan Ryan and James O'Brien.

But where the north Leitrim men couldn't match their southern counterparts was in finishing - Goldrick showed nerves of steel to take two goals while their ability to finish under pressure was something Cluainin couldn't match with Clement Cunniffe, Liam & Colm Moreton and keeper Declan Molloy all grabbing vital scores.

Cluainin relied far too heavily on Gavin O'Hagan for their scores, all seven of their scores coming from the marksman, but it was the misses they will have felt the most as they had six missed opportunities from frees over the course of the hour while Declan Molloy made a superb save to deny O'Hagan a goal in the final minute.

O'Hagan got Cluainin on the board early on with two frees inside the first nine minutes before Clement Cunniffe put over a point for Carrick. Carrick took control on 12 minutes when a high ball broke kindly for Goldrick and his shot, in the wet conditions, proved too hot for keeper Ethan Clancy to handle.

Liam Moreton could have goaled but drove his shot over the bar before O'Hagan, a lovely point from play, and Declan Molloy swapped points. The half ended with another O'Hagan free as Carrick led 1-3 to 0-4 at the halftime interval.

Cluainin started off with another O'Hagan free to cut the gap to a point but a missed free proved costly as Carrick's next score was a goal from Stephen Goldrick, capitalising on a block clearance just four minutes into the second.

O'Hagan responded with a free a minute later but Carrick hit back with a point from Colm Moreton. The game then entered a period of stalemate with no score for 13 minutes when O'Hagan put over hit seventh point to leave three between the teams.

However, from then on it was on, it was Carrick who kept their head with Goldrick putting over a point while Molloy made a great save to deny O'Hagan a goal in the dying seconds.

And in injury time, there was time for a point apiece for Colm Moreton and Cunniffe and two yellow cards for Moreton as well as Carrick celebrated victory.

SEE THIS WEEK'S LEITRIM OBSERVER FOR REACTION AND ANALYSIS