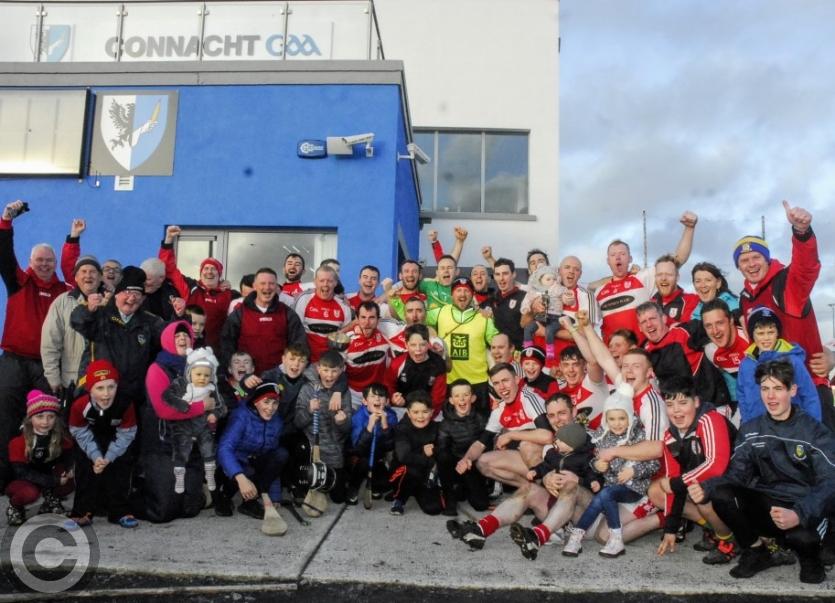 Carrick-on-Shannon Hurlers created a slice of Leitrim GAA history on Saturday when they became the first Men's team from the County to claim a Connacht Club Championship title when they defeated Ballygar of Galway in the Provincial Junior Hurling Final.

Played at a windy Connacht GAA Centre of Excellence, the Carrick hurlers twice came from behind to claim the county's first ever provincial club title in either hurling or football at Men's level with veteran Clement Cunniffe illuminating a man of the match performance with a crucial goal eight minutes from time.

That goal propelled Carrick into the lead for the very first time and with victory so close, they produced some superb scores and play to turn a one point lead into a five point one despite a second yellow card for Colm Moreton.

A late Ballygar goal, with almost the last puc of the game, cut the gap back to two but a  superb Carrick were not to be denied their famous victory with boisterous celebrations among the small but loyal band of hurling supporters who made the journey over to Bekan.

Clement Cunniffe opened the scoring from a free but Ballygar, backed by a strong wind down the pitch, hit back with three points in two minutes before they added another on ten minutes. The Galway champions looked in ominous form but a  succession of wides from frees halted their momentum.

Carrick then produced a wonderful flowing move that ended with a Cunniffe point from play and suddenly the temperature of the game changed - Ballygar lost Conal Greally to a straight red card for a silly swipe at Cathal McCrann after the Leitrim man had won the free.

Colm Moreton made a towering catch from the free and hooked over before Stephen Goldrick tied the scored on 20 minutes. Ballygar continued to press forweard and two more points followed, both from frees, but a huge Cunniffe free from out on the wing meant Carrick were much happier at the break, leading 0-6 to 0-5 at the break with the wind and a man advantage to come.

But it was Ballygar who started the second half best with two fine points inside the first seven minutes as Carrick struggled to find a rhythm. Danny Byrne collected a puck and blasted the sliothar back over the bar in an inspirational score but it was Ballygar who found the net when Diarmuid O'Brien won a tussle and fired to the net on 12 minutes.

Any idea Carrick would collapse was quickly and brilliantly answered in less than a minute - a sideline from Clement Cunniffe was met brilliantly by the hurl of Cathal McCrann and the net suddenly bulged, a goal for Carrick.

Cunniffe and Ballygar freetaker Pearse McDonagh swapped frees but with the game in the balance, a ball into the Ballygar goalmouth led to a scramble, the ball eventually popping out to the side where Clement Cunniffe produced a spectacular finish, driving the ball from the right into the far left corner.

Carrick, buoyed by the goal, lifted their game to heights that Ballygar couldn't match as the Galway men struggled to get out of their half. Enda Moreton made a brilliant catch from a puckout and fed Cunniffe for a wonder score almost on the sideline some fifty yards out.

Keeper and Champions 15 All-Star Declan Molloy then drove a free from nearer his own 21 yard line than the fifty over the Ballygar bar and Carrick were a goal t the good. From that puckout, Colm Moreton rose highest and then blasted a 50 yard effort over the bar.

Unfortunately, Moreton's exuberance got the better of him as, booked just two minutes earlier, he got involved with his marker and received a second yellow to leave Carrick down to 14 men. But Carrick weren't to be stopped and Cunniffe collected an attempted clearance and drove it straight back over the bar.

Typically Leitrim, there was still drama at the end when Carrick defenders got sucked in towards the ball, a pass to the wing found an unmarked Eric Walsh and he drove the ball to the net for Ballygar's second goal. Thankfully, the score came with the four minutes of added time almost up and once the final whistle sounded, wild Carrick celebrations could begin - and they certainly did!