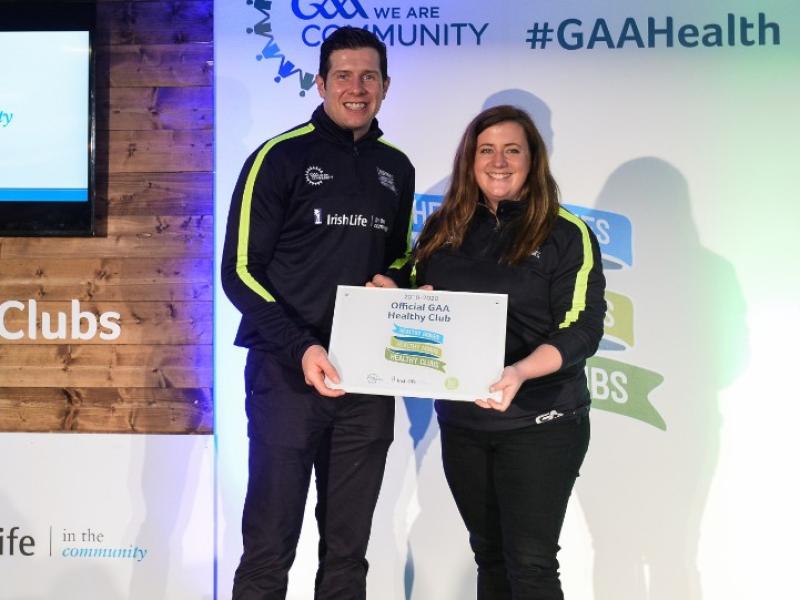 The following is the report of Leitrim Health & Well-Being Chairperson Barbara Loughlin Byrne to this year's Leitrim GAA County Board Convention, which will be held on Sunday, December 16, in the Bush Hotel at 3pm.

“Leitrim GAA are committed to promoting Health and Wellbeing in all our clubs. Most clubs are still finding their feet in this area. As we are in AGM season now, I want to ask every club to appoint a Healthy Club Officer who will take an active role in promoting a healthier club. Working together we can make Leitrim a healthier county.

We in Leitrim Health and Wellbeing are willing to run initiatives for clubs if we get their support. This year we had planned SAFE TALK Training in March and October but had to cancel both due to lack of numbers.

Once again it was great to be involved with the very successful seminar” Leitrim’s Health is Leitrim’s Wealth” which was spearheaded by our own Hubert McHugh and Valerie Cogan and was held in the Bush hotel on 16th May. It was a full house on the night. This seminar has gone from strength to strength and will be run again in 2019.

We continue to promote “The little things Initiative”, I’m sure you have all seen the sign outside Avantcard Pairc Seán Mac Diarmada.

Our critical response plan was sent out to all clubs at the end of last year and also a template so that each club can adopt their own version of the plan. Hopefully clubs will never need this but being prepared for the unexpected is very important. We attended Training in Croke Park during the year and are very willing to help clubs in the completion of their plans. I will contact clubs early in the New Year to see how you’re getting on.

We held Healthy Club Officer Training earlier this year but there was a very disappointing turn out. Another training night will take place where officers from Croke Park will be present along with our own tutor Niall Brady. At present we are awaiting confirmation of a date from Croke Park.

It is very important all clubs are represented so as to educate themselves on their role and to take full advantage of the help that is available. None of us are expected to be experts or to have all the answers.

Our role is to promote a healthy lifestyles and if there is someone in our club that needs assistance then we can point them in the right direction.

Phase 3 of the Healthy Club Project was launched at the beginning of this year with applications in from Three Leitrim Clubs namely Glencar Manorhamilton, Annaduff and Aughnasheelin. Glencar Manorhamilton and Annaduff were initially selected but Annaduff withdrew and Aughnasheelin were then accepted. These Clubs are joining Melvin Gaels who were accepted as a Healthy Club in Phase 2 of the project and who have set the bar very high with all the activities they have been involved in. No pressure lads and lassies!!!!! On that note we Congratulate Katherine Williams on receiving “ A Special Recognition Award” at the National Health and Wellbeing Forum 2018 in Croke Park in October for her efforts in promoting Health and Wellbeing in her beloved Club, Melvin Gaels. Well Done Katherine!

Both Glencar Manorhamilton and Aughnasheelin are getting actively involved running numerous activities such as Recipes for Success, Couch to 5k, Dancing Classes and taking part in the “Get Ireland Walking”-Ireland Lights Up in conjunction with Operation Transformation.

We wish both clubs well in their efforts for the next two years.

Well done to all our clubs who by their very nature are promoting a healthier lifestyle and provide support structures for all our communities in times of need.

Finally I would like to thanks to the rest of the committee, Hubert McHugh, Declan Loftus, Niall Brady, Ronan Flynn, Katherine Williams, Gerry Gallogly, Terence Boyle and Attracta O’Reilly for their help and support during the past year.

Wishing you all a Healthy and Happy 2019 and look forward to working with you again next year.