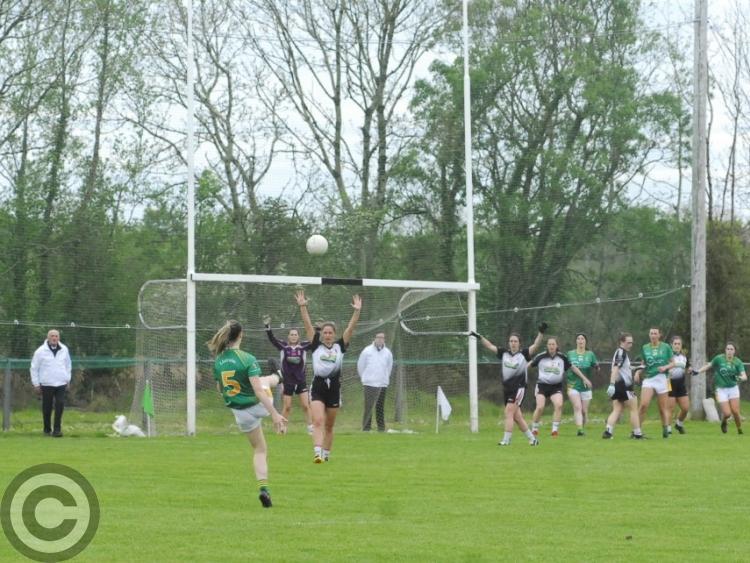 The gap in league positions was reflected in the final scoreline in Tourlestrane on Sunday as an efficient and experienced Sligo proved too strong for a battling Leitrim in the Connacht Ladies Intermediate Championship.

Sligo, who contested the Division 3 Final just a week ago, were in control for the majority of this contest as Leitrim made their first championship appearance in two years but found the step up in class a little too hot to handle.

Sligo were able to create and take goal chances and while Leitrim battled and battled, the gulf in experience and class proved too big a gulf to overcome on this occasion.

Despite the loss, it was still a good day for the ladies game in the county as the county team took to the field once more for championship action. It will take some time but there is talent there to build on.

Leitrim now face Roscommon next weekend in a winner takes all clash, the winner going into the Connacht Final on June 23, against Sligo and the losers heading for the qualifiers.

Sligo got off to a flying start with three points in the first five minutes, Emma Keaveney, Lauren Boles and Katie Walsh (free) all on target as Sligo also missed two chances, Michelle Heslin hitting a wide for Leitrim.

Michelle Heslin did open the Leitrim account with a seventh minute point and despite wides from Vivienne Egan and Heslin, Leitrim pulled to within one with a bizarre free awarded when Sligo delayed over their own free and Bronagh O’Rourke pointed.

Unfortunately, that was as close as it got with a quick free finding Sinead Regan charging through, her offload finding an unmarked Keaveney for an easy goal 12 minutes in. Katie Walsh followed up with a free, Keaveney had an audacious shot that clipped the top of the crossbar and Walsh put over another free to leave Sligo seven clear.

Carmel McGovern saw a shot for a point dip and rebound off the crossbar, a throw-ball awarded as it appeared the referee had already blown for a point. Keaveney blazed a goal shot wide before Bronagh O’Rourke converted a free.

Leitrim went looking for a goal but Edel Kelly saw her shot blocked by the keeper and a defender out for a fifty but Roscommon increased their lead with an unanswered 1-2 in the final five minutes.

Katie Walsh turned her marker before setting up Laura Casey for a clinical goal and Casey added two points to leave Sligo with a commanding 2-8 to 0-3 halftime lead.

Leitrim came out with a lot of energy in the second half but only had a VIivienne Egan point to show for their efforts as they hit wides and couldn’t break through the Sligo defence. Laura Casey pointed excellently from a very tight angle before Sligo hit two points in the space of just two minutes.

First game a Sinead Regan point after a very good move and then her fellow midfielder Ruth Goodwin charged through the centre for a good point.

Leitrim did hit back, albeit with a slight bit of good fortune, when Bronagh O’Rourke’s 30 yard free dipped at the last moment and evaded the grasp of Sligo keeper Rachel Quigley under pressure from Vivienne Egan and squirmed into the net.

Sligo’s response was devastating as they hit 1-2 in the space of two minutes, Laura Casey driving the ball over the bar when a goal was on, Katie Walsh tapping over a free while a brilliant team move ended somewhat bizarrely when Walsh bounced the ball ahead of keeper Michelle Monaghan, it bounced over her head and Walsh tapped the ball to the net.

With the game well and truly over and Sligo emptying their bench, Leitrim finally found some momentum and Michelle Heslin drove over a good point before sub Shauna McGrath got on the end of a long ball and fired low to the net.

Unfortunately, Sligo’s response was a fourth goal, coming when sub Una Higgins burst through and fired a speculative shot at the Leitrim goal, the ball unfortunately deceiving keeper Monaghan with the bounce to end up in the net.

Kate Walsh first over a lovely long range point to complete her day’s work but Leitrim put a bit of a gloss on the scoreline with an unanswered 1-2 in added time. The goal came when McGrath crossed the ball across the face of the goal, Vivienne Egan saw the keeper and a defender make the block but sub Sarah McLoughlin was on hand to plant the ball in an empty net.

The finish was not without cost as Michelle Heslin injured her ankle and had to be replaced but her sister Aine tapped over two late points, one from a free, to leave Sligo comfortable winners.

SEE THIS WEEK’S LEITRIM OBSERVER FOR REACTION AND ANALYSIS