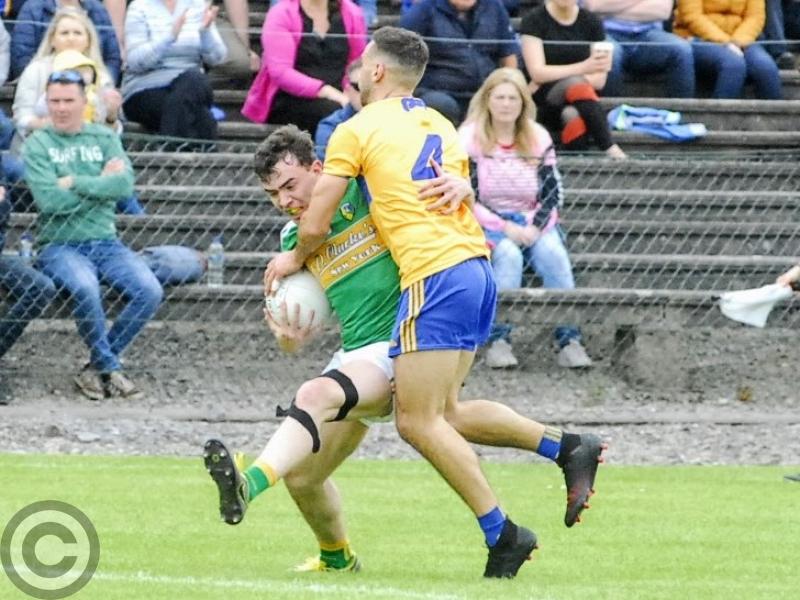 Clare ensured there would be no fairytale ending to Leitrim’s championship campaign as they comprehensively outclassed the home side in round 2 of the All-Ireland Senior Football Championship Qualifiers in Avantcard Pairc Sean Mac Diarmada.

Many Leitrim fans believed that Leitrim could test the Munster men but Clare quickly disabused them of that notion as their speed, physicality and precision passing cut holes in the Leitrim defence time and time again during the first half.

The Banner men set their stall out early with three points in the first nine minutes and a block on a goal bound shot and while Leitrim closed the gap with good scores from Domhnaill Flynn and Dean McGovern, Clare soon ensured that the result was put beyond all doubt.

Jamie Malone’s goal on the 13 minute, brilliantly set up by a blistering run through the Leitrim defence from Conal O hAinifein led to a virtual explosion of Clare scores, the Munster men four unanswered points before Gary Brennan netted their second goal.

That goal exploited Leitrim unease in the full-back line as Brennan smashed a fisted effort off the crossbar before tapping the rebound home. It could actually have been worse had Clare not hit the crossbar and Cathal McCrann made a brilliant save from David Tubridy.

Two frees from Flynn was the only reply for a shell-shocked Leitrim as McCrann made another brilliant save from Jamie Malone and despite good scores from Dean McGovern and Evan Sweeney, you could argue that Clare’s 12 point halftime lead didn’t actually reflect their dominance.

The third quarter followed the pattern of the first half with Clare keeping Leitrim at arms length with ease and when sub Eimhin Courtney finished off a wonderful Clare move for their third goal, the lead was now 14 points.

Leitrim did rally for the final 15 minutes but with Clare emptying their bench and Leitrim getting a good run of favourable calls from the referee, it was no more than window dressing as Leitrim never threatened a goal.

With points from Gary Brennan and Eoin Cleary, Clare ensured Terry Hyland’s side never got that close to cause them any worrying despite a late run of points from Mark Plunkett (2), Shane Moran, Evan Sweeney and sub Jack Heslin.