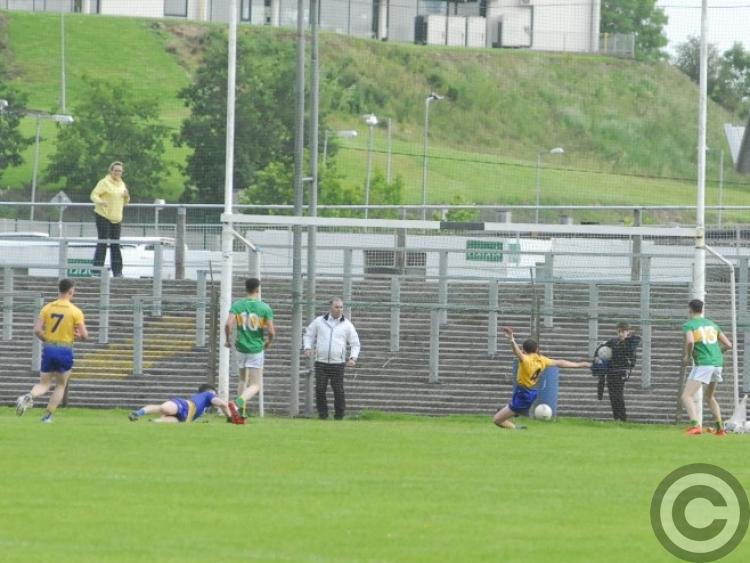 Drama and controversy abounded in Avantcard Pairc Sean Mac Diarmada on Wednesday evening when an unheralded Leitrim U20 side were denied victory in the Eirgrid Connacht U20 Championship opener after an injury time Roscommon free was deemed good by the officials.

A vibrant and potent Leitrim took the game to Roscommon and led by six points midway through the second half, looking set to end Leitrim's run of provincial defeats this year. But despite the visitors having a man sent off, they forced their way back into the game firing over an equaliser six minutes into added time.

There was huge controversy too over the equaliser with many Leitrim officials adamant Paul Carey's free had gone wide, the Roscommon player even clutching his head after the kick but after a moment's hesitation and apparently on the advice of a linesman, referee Paul Lydon awarded the free.

That sent the game to extra-time and Roscommon dominated the first period, hitting an unanswered 1-2, the goal coming from James Fitzpatrick, as Leitrim seemed to struggle with the disappointment of not winning the game in normal time.

But instead of collapsing, three great points from Jack Gilheaney and a Mark Diffley free reduced the gap to a point. Brian Derwin scored what looked like the insurance point in the first of two minutes of added time but a monster Aaron Hoare scored gave Leitrim one last chance.

And they got it! A foul some 54 yards out and in front of the posts was left to Mark Diffley to take it with the referee telling him it was the last kick of the game. Unfortunately, with tiredness overtaking both teams, the St Mary's man couldn't find the target as Roscommon got out of jail in an incredible game that was a testament to both teams.

Roscommon were denied an early goal from Paul Carey but David Keenan popped over the loose ball but five minutes into the game, Leitrim did find the net, Paul Keaney and Jack Gilheaney releasing Mark Diffley who unleashed a rocket to the roof of the Roscommon net. 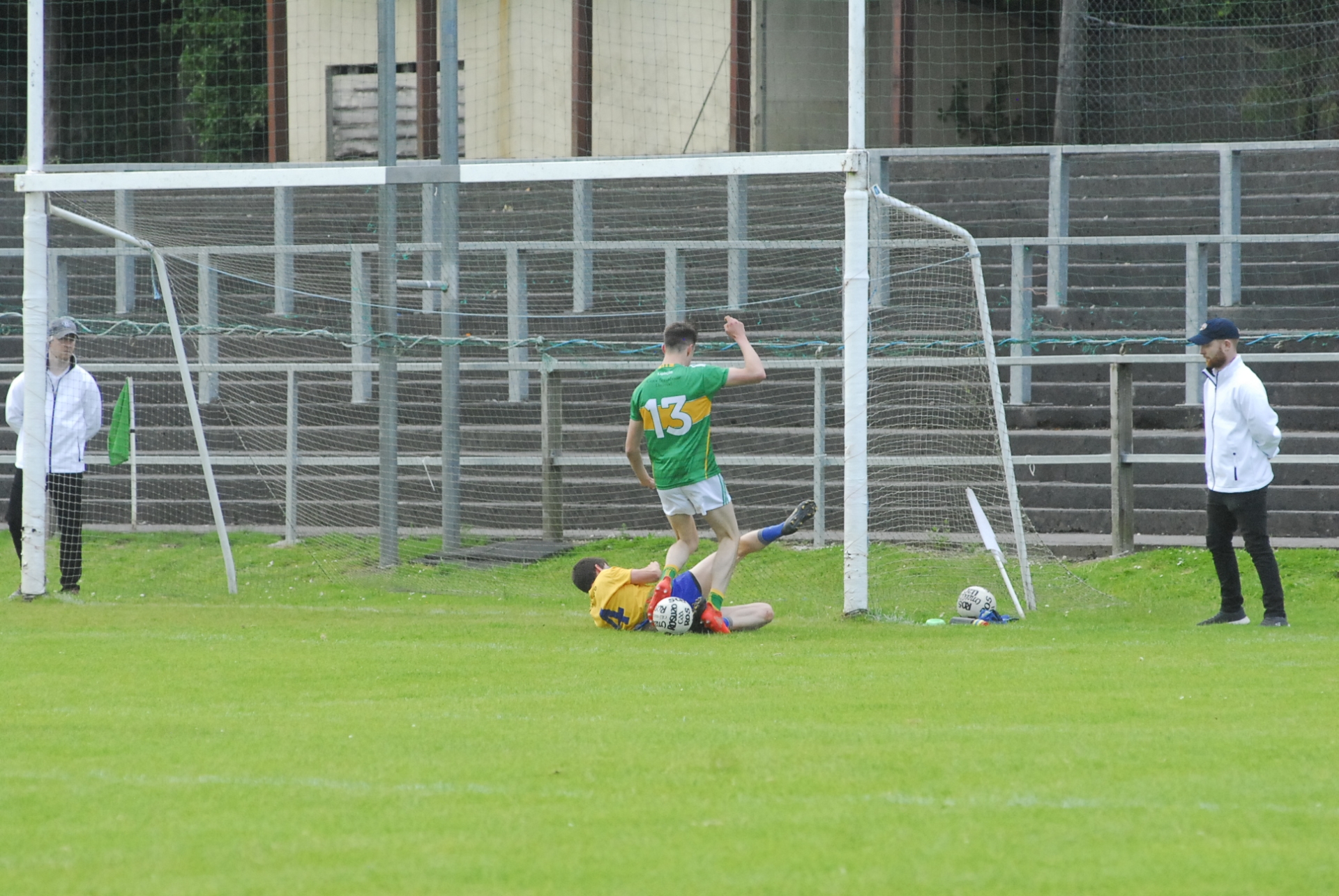 Three minutes later, Leitrim had a second goal, albeit with a large slice of good fortune. James Clancy sliced open the Roscommon defence and played the ball across goal to Jordan Reynolds. Roscommon defender Robbie Dolan slid in front of the ball, blocking the shot with his thigh but the referee blew for a penalty, expertly dispatched by Diffley.

Roscommon hit back with a Paul Carey point before Dylan Ruane got away with a bit of overcarrying to add another for the visitors.

It wasn't all going Leitrim's way as Riordan O'Rourke was black carded for hauling down Ronan Dowd, the centre-forward converting the 50 yard free and amazingly, Roscommon went in front on 15 minutes when a poor kickout saw Dowd run straight in to score.

Mark Diffley was unlucky to miss a goal chance before Jordan Reynolds scored a brilliant effort from a tight angle and, incredibly, just two minutes later, Jordan went better again, showing great footwork and persistence to fire home from a tight angle after a great run from Tom Prior set up the score.

Ronan Downd and Ciaran Cullen swapped points, the influential Cullen adding another before halftime after a strong run down the middle while Diffley converted a free to give Leitrim a 3-4 to 1-5 halftime lead.

Oisin Bohan, who had replaced Riordan O'Rourke, then showed a real killer's instinct when he drilled a low shot from 20 yards out into the far corner of the net, the goal didn't seem on but the St Mary's man saw the chance and took it in style.

James Clancy, whose run set up Bohan's scored, added a point before Dowd and Diffley swapped points from play.

The game then took another significant twist and if Roscommon felt aggrieved about the penalty, Leitrim had equal right to be aggrieved about the visitor's second goal. Paul Carey fouled his man by ripping the ball from his grasp before surging in on goal and firing to the net.

Roscommon, however, showed that while they might not be the best team to wear their colours, they certainly have the same grit and resolve. Two Ronan Dowd frees narrowed the gap to a point as Leitrim started to kick balls over the sideline and lose possession easily.

Ciaran Cullen's intercept and pass in behind the Roscommon defence seemed to promise a certain goal for Oisin Bohan but the St Mary's man stuck the ball over the bar. Sub Diarmuid Kelleher shot a great chance wide while James Clancy dropped a shot into the keeper.

Roscommon were missing chances or overplaying the ball as the game went into the five minutes of added time but Leitrim broke and looked to have a great chance to seal the win only for Sean Harkin's shot to fly inches wide.

With time almost up, Roscommon charged forward and a heavy challenge on a Roscommon player led to a free. Paul Carey's free looked from my vantage point as if it had gone wide but we were the wrong side. Leitrim officials were adamant it had missed the target but unfortunately, the flag went up, the scores were deemed level and the game went to extra-time.

A reprieved Roscommon started like trains, perhaps aided by the move of Jack Gilheaney to full-forward and out of midfield. Paul Carey fired over after just 22 seconds and then missed a free while a clearly cramping Ciaran Cullen also had a wide. 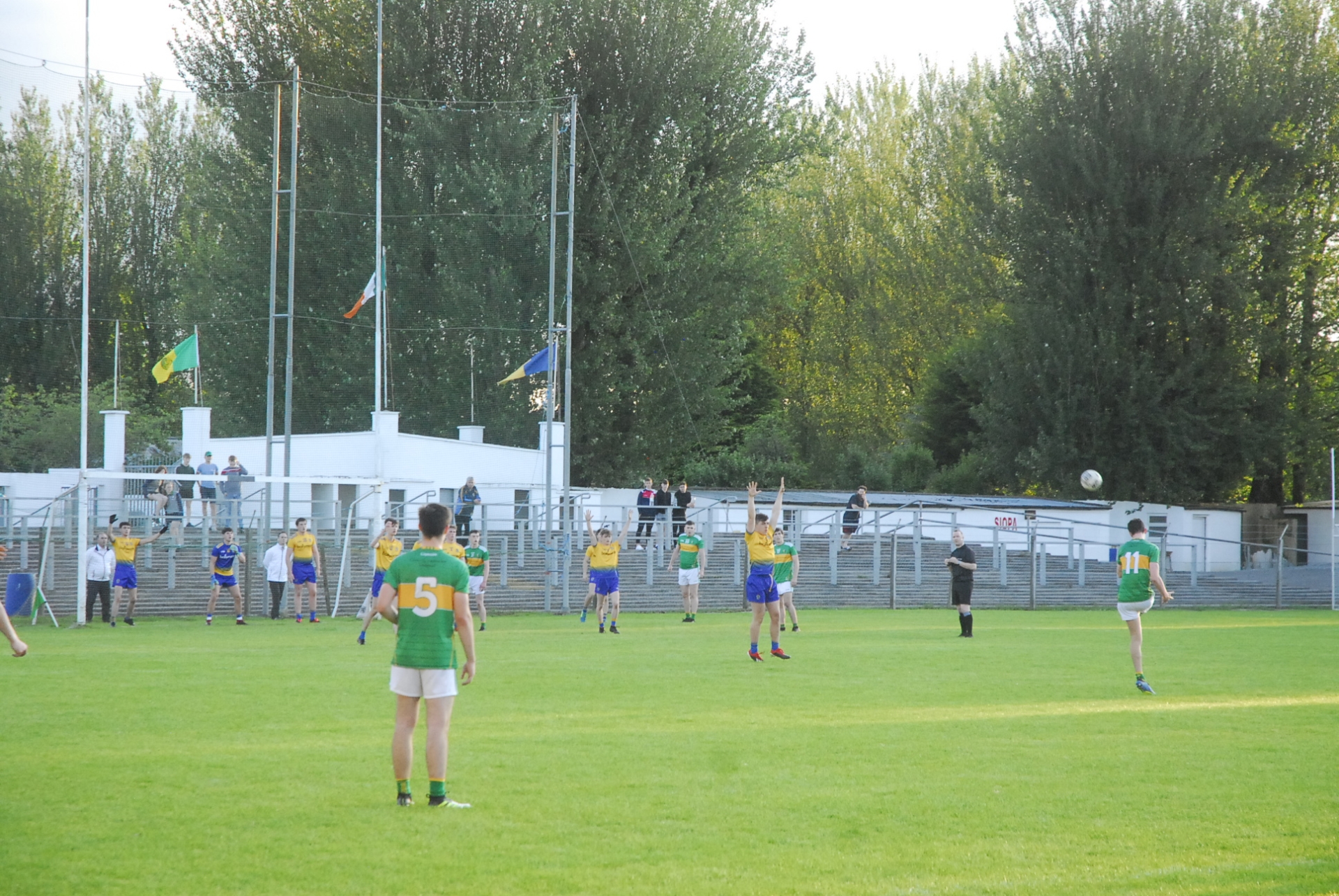 Roscommon won the game in the space of a minute - Dylan Ruane pointed after a patient move and when Leitrim lost the ball, a quick ball into James Fitzmaurice saw the Oran clubman fire to the net, just as he had for Roscommon CBS in their All-Ireland colleges win.

A Jack Gilheaney point after a long run was Leitrim's only score of the first period as Leitrim trailed by four. Three minutes into the second ten minute period, Gilheaney dodged his man and fired over and suddenly the crowd were back to life and when Mark Diffley fired over the gap was back to two points.

Barely a minute later, Gilheaney blasted a 55 yard free high over the Roscommon bar and there was only a point in it. Gilheaney then put a free wide and Diffley shot wide and Roscommon broke as the game went into the two minutes of added time, Brian Derwin firing over the bar for a two point lead.

Back came Leitrim and Aaron Hoare defied all tiredness to blast a monster effort from the right wing over the town goals. Leitrim needed possession, they got it from the kickout and Roscommon fouled, leaving Leitrim with a long 54 yard free. Mark Diffley showed real guts in stepping up to take but his effort flew well wide and the final whistle sounded to leave Leitrim heartbroken.