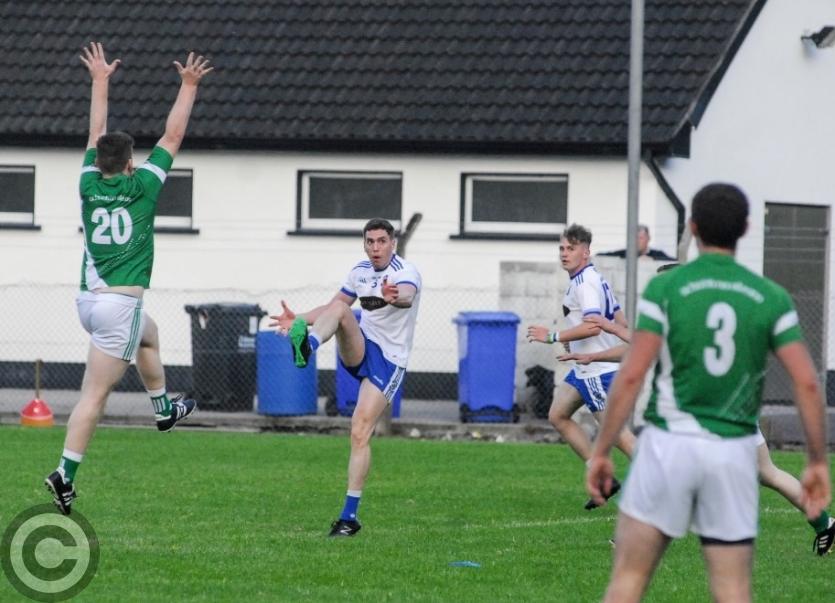 Despite a slight wobble in the second half that saw Aughnasheelin cut a seven point lead down to four points, St Mary's Kiltoghert cruised to a comfortable victory in the second round of the Connacht Gold Senior Championship in Cloone on Thursday evening.

The Carrick men led by six points just after halftime but a string of points from a committed but vastly understrength Aughnasheelin cut the gap down to just four points. But with black card for Barry McWeeney midway through the half, St Mary's hit nine points before the finish to secure their second win of the campaign.

For Aughnasheelin, the 11 point loss is almost a win given the lack of playing strength - already with the injured Ciaran Cullen and Fintan Fitzpatrick only coming on as a sub of last resort, Aughnasheelin were also without the injured Sean McWeeney,  Ben McGirl, Niall Mulvanerty and Gavin Sammon.

For any club to be without the core of their team is hard enough, for a small club struggling for numbers, this was a huge handicap from the off and while they didn't attack with the verve that marked their outing against Aughnasheelin, they did make it difficult for a slick and quick moving Carrick.

Carrick's lacklustre third quarter might have been down to feeling the job was already done but once they upped the pace in the final quarter, they showed their class.

Barry McWeeney opened the scoring from a free in the third minute but a block on an Oisin Bohan shot set the tone for St Mary's in the first half. Two points apiece from Ray Mulvey and Mark Diffley, with two frees, got Mary's up and running with James Glancy scoring a swift counter-attack.

David O'Connell swept a nice effort from the corner over the bar and Oisin Bohan got in on the scoring with eight minutes left in the half. Barry McWeeney hit his second free but St Mary's would add points from Mark Diffley and Oisin Bohan.

The half ended with another McWeeney free to leave St Mary's 0-9 to 0-3 in front at the break. Kevin McWeeney was inches away from getting on the end of a long ball into the Carrick goalmouth but Barry McWeeney did convert a free.

Jack Barnes scored from a tight angle after good work from Nicholas McWeeney and Ray Mulvey but Aughnasheelin were building up a head of steam with Paul Earley raiding from defence to score a good point nine minutes in. Aaron Hoare then floated a lovely high shot over the Mary's bar to leave four points in it.

Long serving veteran Brian O'Donnell then weighed in with two excellent points in the space of two minutes to stretch the lead to eight points. Fintan Fitzpatrick, on for McWeeney, tapped over a free but St Mary's were on a roll and points from sub Adam Reynolds, Mulvey, Diffley (2) and Daire Farrell stretched the lead.

The game ended with a free from Conor Cullen to complete the scoring.