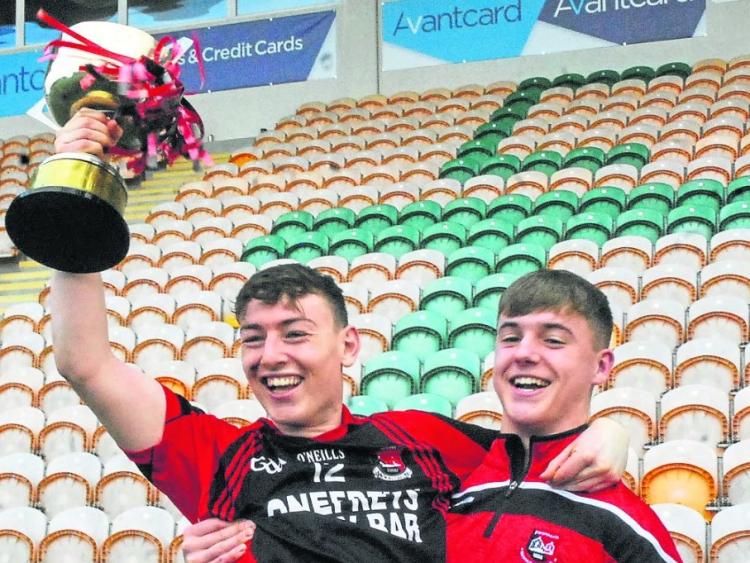 Oisin and Aaron McLoughlin celebrate last year. Who will follow in Fenagh's footsteps and claim the 2019 Intermediate Championship?

This could be one of the games of the year - a derby battle with so much on the line and so much history between the two clubs that it should be a thriller, a tough, bruising, hard hitting and no quarter spared thriller.

Drumkeerin have been one of the unluckiest teams in Leitrim football over the past 15 or so years, a team good enough to win the Intermediate title but always coming up against a team that proves just too good for them on the day.
Loss in finals to Aughawillan and Ballinamore doesn’t diminish how good these lads have been for so long and if anything, Ballinamore’s run to a Connacht Intermediate Final the year they beat Drumkeerin showed just how good the north Leitrim men are.

Drumkeerin have had a few trials in this campaign but when the chips are down they have come through with flying colours. Eslin were favoured the last day and an injury to Conor Beirne obviously helped but there was no doubting that Drumkeerin took control of that game and were comprehensive winners.

Cathal McCauley looks back to his best form while Declan Daly, the evergreen Ciaran White, Aidan Dolan, Jason Byrne and Colm Clarke are key figures. They have a history and a know-how in this championship and would deserve a shot at the title.
Whether they get that shot is up to their neighbours Ballinaglera who have been steadily building year on year, getting stronger and going further each time. Like Drumkeerin, it is the same old faces that come back year after year but they are still producing the goods.

A straight down the middle team with immense physical power, Seamus McMorrow and Enda McGuire carry the leadership role lightly with this team.

Both are capable of big time performances and if they hit their stride, Drumkeerin will be hard pressed to stop them.

This Ballinaglera have tasted success, a Division 2 League crown and experience against the big boys sure to stand to them but what really marks them apart is their sheer desire and determination - if this match is anyway near in the balance come the finish, Ballinaglera will empty themselves in pursuit of victory.

Hard to draw a form line between these teams - when they met in the League, Drumkeerin won by six points but it is Ballinaglera who won promotion. Eslin lost to Drumkeerin but beat Glera but again Conor Beirne was in full flow at that stage.
A hunch tells me Ballinaglera but the same hunch also knows that they haven’t reacted well to pressure in the past. If they deal with that, I think they’ll get by their neighbours but don’t be surprised by yet another Drumkeerin giant killing!

This is a game worthy of the Senior championship, two ambitious, young up and coming teams that have a rivalry and wouldn’t particularly be fond of each other. It is not surprising either because they remind you a lot of each other!

Both have a few veterans but are mainly young teams, they run up big scores but have had a few wobbles along the way. They met in the second round of the group stages earlier this year with Annaduff cantering to a 3-11 to 1-7 victory.

What makes Annaduff wary about that win is who was missing for Leitrim Gaels - Enda and Liam Moreton weren’t around, they’re back now and the Gaels are a very different prospect with them, not too easy to run through and Enda provides a spark of the unknown in the attack.

Having watched the Gaels in a couple of games, they are doing so much right but just seem to be clicking right when it comes to the attack, forcing shots and registering a lot of wides.

An improvement in that sector could make them well nigh invincible in this grade but it has been a problem that has persisted all year.

Annaduff look like a team on a mission after losing last year’s final. Their attack has improved and in Sean McNabola and Kenny Cox, they have two potential match winners while David O’Dowd, Conor Reynolds, Dillon Keane and David Duignan are real leaders.

Sometimes one wonders about their defence, that they are conceding too much but they are mobile and hard tackling and never stop working, just perfect for the sort of challenge Leitrim Gaels will pose them on Sunday.

Leitrim Gaels do have a lot of remarkable running power - David Bruen and Aidan Flynn are going to be key as that duo set the tempo and push the ball along to Enda Moreton and co. Getting the match-ups right on those two is no easy task for Annaduff.

After the first couple of rounds of the championship, I’d have had Annaduff out in front, their forward unit seems to have gotten stronger and they have great strength in depth but as the competition has gone on, Leitrim Gaels have impressively and steadily closed the gap to a point where it might be too close to call.

A finger injury to Liam Moreton the last day could have huge consequences if he is unavailable. Leitrim Gaels won the League meeting between the pair by three goals and they have that potential to turn the game on its head.

The pressure is going to be big on both teams here with three teams being relegated to the Intermediate grade this year. This could be a last chance saloon for Senior football - who deals with that pressure best is hard to tell. I’ve been thinking Annaduff all year and maybe Ray Cox will do his magic once more but the Gaels may just sneak this one.