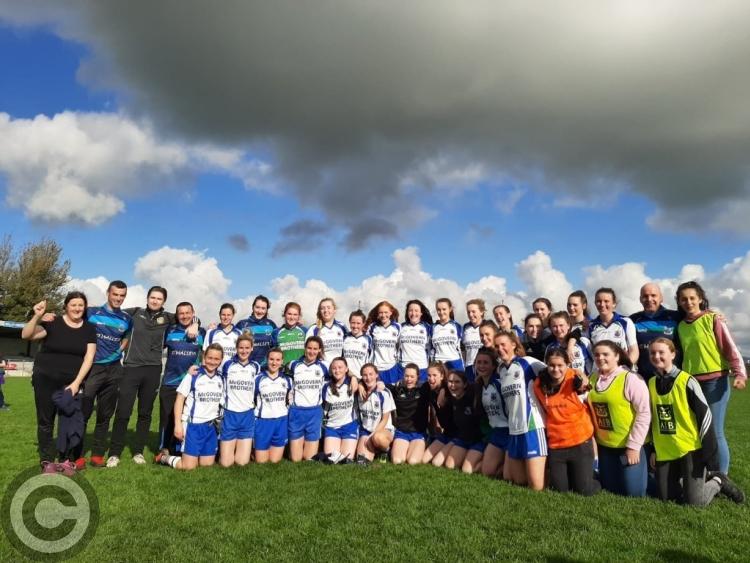 St Joseph's produced a stunning performance before seeing off Mayo champions Kilmoremoy, in the Connacht club intermediate quarter-final played in Ballina on Sunday.

In what was a rip-roaring encounter, Joseph's were full value for their victory as over the course of the hour they were the better team.

The Leitrim champions were a delight to watch at times as their movement, passing of the ball and overall team play, as well as their scoring taking, was truly magnificent. Credit must also go to Kilmoremoy who also contributed handsomely to brilliant game.

However, they just had no answer to their opponents dominance, especially in the second half when the game was there to be won and lost by either side. In the end they just could have no excuse regarding the final result.

Although Joseph's Grainne O'Malley opened the scoring as early as the first minute with a point for Joseph's, both sides were slow to settle into the game. However, after Bronagh O'Rourke and Sarah Rowe exchanged points, the Mayo side took control.

Following three more points from Rowe, the had the games opening goal in the 14th minute when Mary McHale was on hand to finish off a great Kilmoremoy upfield movement, to leave them leading by 1-4 to 0-2 at the end of the first quarter.

Although the home side extended their lead with another point from Rowe, Joseph's hit back in brilliant style. A fine point from the outstanding player on the field,. Michelle Heslin, was followed with 60 seconds by a goal by Celine Shortt in the 19th minute.

Before the visiting supporters had time to stop applauding Shortt's goal, the Kilmoremoy goalkeeper Gerogina Masterson was picking the ball out of the net again after Michelle Heslin raced through before planting the ball in the back of the net. In the space of four minutes Joseph's had turned a five-point deficit into a three-point lead.

In fairness Kilmoremoy hit back with with a goal and two points from Rowe, and a point each from Tasha Garrett and Allana Naughton to regain the lead before the half time break. During this period Joseph's did add another point to their tally, a converted free by O'Rourke, but they trailed by three at the break, 2-8 to 2-5.

On the resumption both sides traded points on three occasions, Michelle Heslin (two) and Celine Shortt for Joseph's, with Rowe scoring all Kilmoremoy's three. However, in between these scores Joseph's scored a third goal when Michelle Heslin planed the ball in the back of the net after receiving an inch perfect pass from Shortt.

Although the home side regained the lead with a fine point from Tara Regan, Joseph's scored a fourth goal just at the end of the third quarter.

This time the goal came from the penalty spot which was brilliantly dispatched by Carmel McGovern. The penalty was awarded after O'Rourke was pulled to the ground in the big square by Kilmoremoy's Lara Sheridan who picked up a yellow card for the tackle and 10 minutes in the sin bin.

Now in full flight Joseph's made their dominance at this stage pay by scoring 1-5 to their opponents one point. Short and O'Rourke scored two points each with one from Rachel McIntyre, while McGovern got her second goal of the game after she hit a low drive to the back of the net in the 60 minute. It was now game, set and match to Joseph's as they led by nine points.

In fairness to Kilmoremoy they kept battling away and were rewarded with two points from Ciara Whyte and a last minute goal from Eimear Treacy to make the final score more respectable.