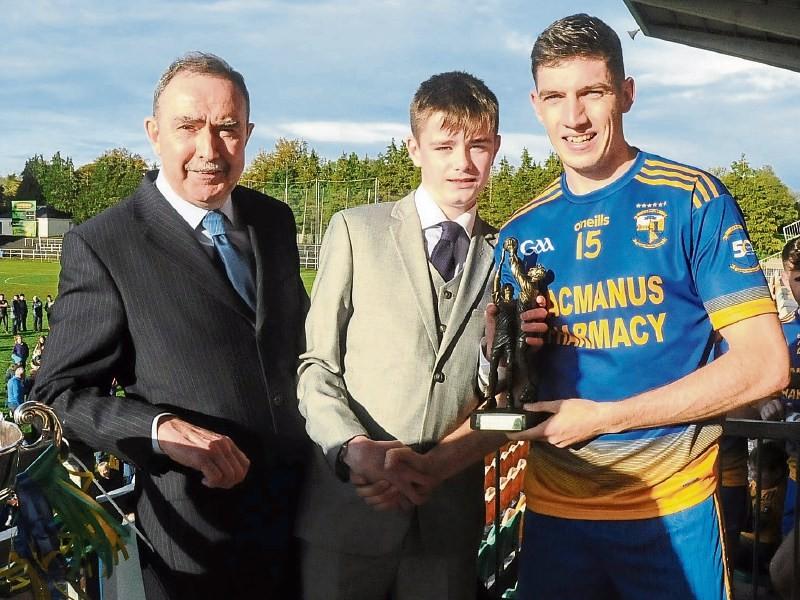 Conor Dolan winning the Senior Final Man of the Match Award was one of Glencar/Manorhamilton's highlights of the year Picture: Willie Donnellan

THE FOLLOWING GLENCAR/MANORHAMILTON GAA CLUB NOTES WERE RECEIVED TOO LATE FOR OUR PRINT EDITION, IN SHOPS ON MONDAY DECEMBER 23.

We extend season's greetings to all our players, club members, coaches, volunteers, officers, fundraisers, sponsors and the entire community who support us year in year out.  A combined effort has made 2019 one of the best years ever for our club with many highlights including:- our jubilee celebrations; honouring our past players and inaugural officers; our new pitch opening in Boggaun; history book and commemorative booklet productions; bumper football and hurling club camp attendances; hosting Feile at our two pitches in the Bee Park and Bogguan with our boys and girls teams performing admirably; fielding two underage teams at U13 boys and U12 girls; U12 boys success in the Longford Leitrim League and the U13s winning the A Championship Shield and B Championship; an U15 Boys Championship title; U14 and U16 underage ladies titles; Frank Brady being honoured as a Joe McInerney Award recipient in New York; an All Star Lory Meagher nominee for Gavin O'Hagan; Muireann Devaney receiving a Rising Star Award from Connacht Ladies; Conor Dolan being honoured as the Leitrim Club Player of the Year; the Leitrim Sports Partnership Club of the Year Award; Participating in the Senior Hurling, Senior Ladies and Junior B Football Championship Finals; a Junior A Championship title and of course the crowning glory, our Leitrim Senior Championship success and the scenes of jubilation in Páirc Seán and at the Market Square.  Thank you to everyone who played their part in our very special year. Roll on 2020.

Hearty congrats to our senior footballer Tom Coyle and his girlfriend Máire Kelly who were married at the weekend in Birr, Co Offaly where a great weekend was had by all.  We wish the happy couple many years of health and happiness.

Glencar Manor Jubilee Dinner Dance takes place on Saturday January 18, in the Landmark Hotel. Tickets priced at €35 are now on sale in Costcutters. A bus will also run to the event - anyone interested in booking a seat should contact Collette Fox.

Our Jubilee celebrations features in the Leitrim Guardian and it always makes a nice Christmas gift for someone.

We take this opportunity to thank John, Philip, Willie and all the staff in the Leitrim Observer for their excellent coverage of our club throughout the year.  We extend our thanks to our good friends in Ocean FM and in particular Austin O'Callaghan, John Lynch, Francie Boylan, Brian Kerrigan and Kevin Keenan and to Breifne Earley and Órla McNabola at Leitrim Daily which is a marvellous new media venture promoting all that is good in our lovely county which great emphasis on sport.

National Draw tickets are now on sale for €10 from any club officer. All proceeds go to the Club and there are excellent prizes.  Please support.