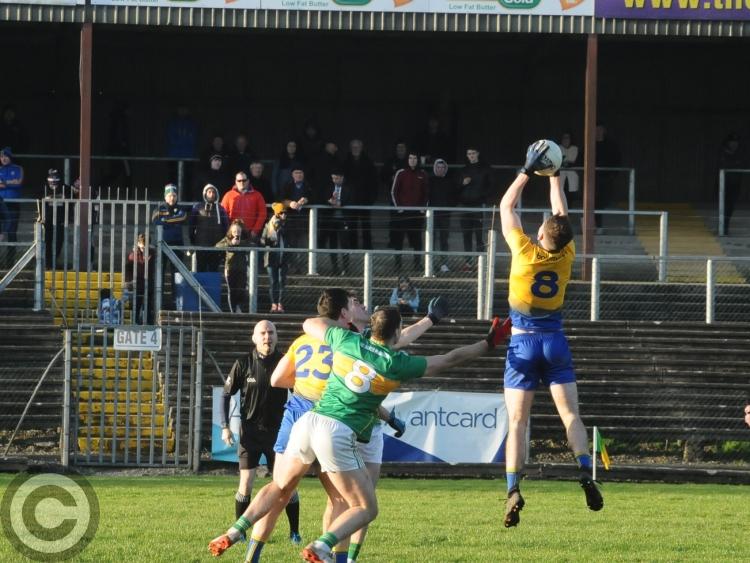 Roscommon's Luke Mollahan makes a catch in the middle of the park Picture: Willie Donnellan

Leitrim's first outing at Senior level in 2020 ended with a humiliating defeat at the hands of old rivals Roscommon who inflicted a 30 point hammering point on the Green & Gold in Avantcard Pairc Sean Mac Diarmada on Sunday.

With both teams far from full-strength, this was a test of both counties resources and there was no doubt that Anthony Cunningham emerged a much happier man as his side ripped Leitrim to shreds in the first half, scoring three goals in the first 14 minutes.

Leitrim were minus a large contingent of first choice players but the manner in which Roscommon's players simply blew through the home team's challenges and found vast swathes of unmarked space in the Leitrim defence must be a worry for manager Terry Hyland just two weeks out from the start of the League.

The Green & Gold managed just one point in the first half, a seventh minute effort from debutant David Bruen of Leitrim Gaels, the half-back unlucky not to add another in the first half while Conor Dolan also saw a shot blocked.

Leitrim almost started the game with a goal when a long ball saw the Roscommon full-back drop the ball right into the hands of Darragh Rooney. The Melvin Gaels man turned and fired low for the corner but Roscommon keeper Colm Lavin made a huge stop, his right leg diverting Rooney's well struck effort out for a fifty.

Finbar Cregg almost goaled on four minutes, his shot blocked out for a fifty but the visitors didn't have long to wait for a goal as a great move from a Leitrim kickout ended with Noel Gately firing to the net on six minutes later. David Bruen replied with a point but almost immediately, Roscommon found the net again through Andrew Glennon and already the game was looking beyond Leitrim.

A third goal on 14 minutes from Enda Smith put Roscommon ten points clear and they continued to pull away, adding a fourth goal from Glennon to leave them 4-7 to 0-1 ahead at the break. Leitrim also would be down to 14 players for the second half after Sean Flanagan picked up two yellow cards in two minutes just before halftime.

The second half didn't get any better with Enda Smith smashing home a penalty before Finbar Cregg grabbed another goal on nine minutes.

Leitrim suffered another major blow when keeper Diarmuid McKiernan suffered a serious shoulder injury in denying Cregg another goal and he looks like a major doubt for the League. His replacement was 17-year-old St Mary's Kiltoghert fifth year student Killian Gaffey in a major step up for the youngster.

Unfortunately, Gaffey had to pick the ball out of the net three times as Cregg landed his second goal with Donal Wrynn's 48th minute point the only Leitrim score in a succession of Roscommon scores, their last score falling to Conor Cox in the last minute of normal time.

In added time, Leitrim hit four unanswered points from sub Oisin McLoughlin (2) and Oisin McCaffrey and Aaron Hoare to round off a disappointing day for Leitrim fans.