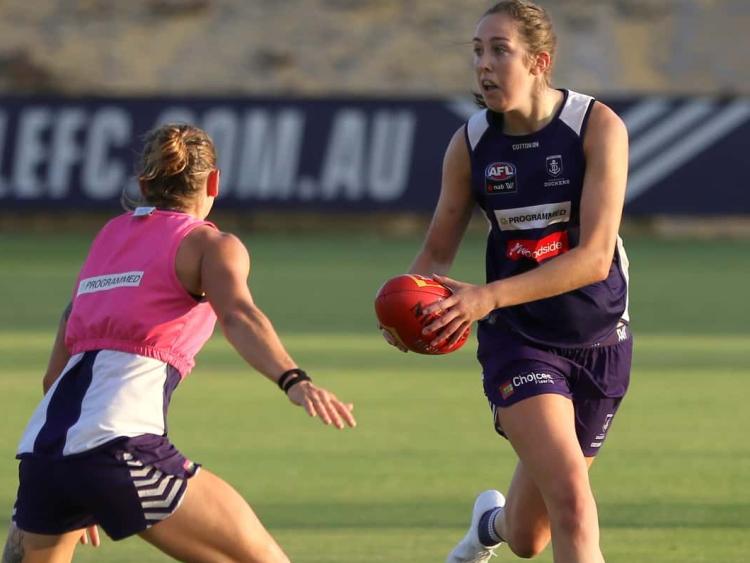 One of the most highly anticipated Leitrim sports stories of 2020 may come to an abrupt end after Kiltubrid and Leitrim Ladies football star Aine Tighe suffered a serious knee injury in a pre-season game last Saturday.

Aine was forced off after “landing awkwardly” in the third quarter of Freo’s 17-point loss to 2019 Premier champions Adelaide Crows with Fremantle revealing that they had sent their highly prized Irish import “for scans to determine the extent of the injury.”

Fremantle manager Trent Cooper told the club's website that the initial prognosis was not good: “It doesn’t look great at this stage but we will get some scans next week on her left knee.

“At this stage we have our fingers crossed, that she is okay but if not we will have our full support behind her. She is such an exciting player and has done everything right for the club so far.”

AFLW reporter Sarah Black tweeted at the time of the incident, commenting that the injury was "not looking good"

If there’s a position Freo can ill-afford to lose a player, it’s the ruck. Irishwoman Aine Tighe just went down after landing awkwardly. In a lot of pain and not looking good at all.

The 27-year-0ld Kiltubrid native had just recovered from a cruciate knee injury sustained in 2018 before taking up Fremantle's offer through the AFLW Cross-coders programme and was already making a big impact, leading the ruck division in Fremantle's previous pre-season game.

Indeed, Aine tweeted herself her excitement on January 16, about the upcoming challenge:

The injury will be a cruel blow to one of Leitrim's most talented sportsperson just as the AFLW season was about to start, Fremantle's first game against Geelong on Sunday, February 9.