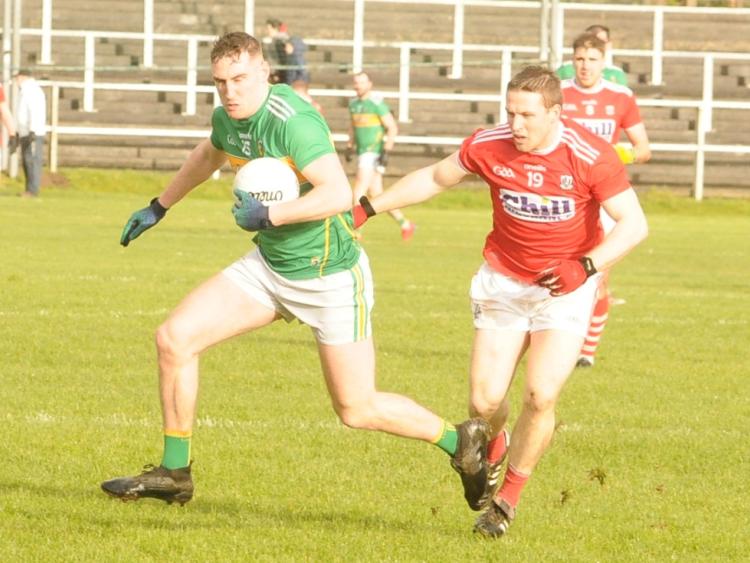 Keith Beirne on the attack for Leitrim against Cork Picture: Willie Donnellan

A powerful Cork side underlined just why they are favourites for the Allianz League Division 3 title this year with a composed and efficient victory over a committed but lacklustre Leitrim in Avantcard Pairc Sean Mac Diarmada.

Leitrim found it hard to reproduced the heroics of Saturday week's draw in Celtic Park as Cork dominated possession for long stages and the power and physicality to repeatedly break through Leitrim's massed defence.

Indeed, were it not for three wonderful saves from keeper Diarmuid McKiernan, Leitrim would have been looking at far worse than the 1-7 to 0-3 scoreline the home team trailed by at halftime.

Errors contributed to Leitrim's downfall with poor and misplaced passes allied with turnovers contributed to key scores for Cork on the break but the reality also reflected the fact that Leitrim were unable to create too many chances against a resolute Cork defence.

There was one golden chance 15 minutes in - Keith Beirne and Ciaran Sheehan swapped early points as Cork missed some good early chances and Cathal O'Mahony tapped over two points, Berine responding with a lovely effort from play.

But when Beirne played the ball over the top to an unmarked Darragh Rooney, all Leitrim fans rose in anticipation of a goal. However, Cork keeper Micheal Martin advanced quickly and saved the shot. Diarmuid McKiernan made a wonderful save at the other end to stop O'Mahony from grabbing a goal.

Cork added points from O'Mahony and John O'Rourke, Beirne replying to leave two in it six minutes before halftime. But the effort took its toll on Leitrim and with Cork introducing star Luke Connolly off the bench, they soon put the game to bed.

McKiernan made a great save from Ian Maguire, set up by Sheehan, and the duo worked wonders with Maguire twice intercepting and running through to set up Sheehan for a point and a goal. Luke Connolly was then denied a goal by a wonder save from McKiernan but full-back Thomas Clancy fired over to leave Leitrim trailing Cork by 1-7 to 0-3 at the break.

Leitrim lost Fergal McTague to injury early in the second half with Beirne scoring his and Leitrim's fourth point four minutes in. Luke Connolly scored a brilliant point before earning a spell in the sin-bin for pulling down Jack Gilheaney. Yet during the 10 minutes where Leitrim had a man advantage, Cork held onto possession rather easily with only two Beirne free answering a Tadhg Corkery score.

Back up to full strength and boosted by the introduction of Paul Kerrigan, Cork eased away with Kerrigan scoring from an impossible angle with his first touch. Points from Evan Sweeney and Keith Beirne only temporarily halted the Cork charge with Connolly three in a row to stretch the lead to ten points.

A long range Ray Mulvey point ended the scoring but it was Cork who departed Avantcard Pairc Sean Mac Diarmada the happier with a comfortable victory.