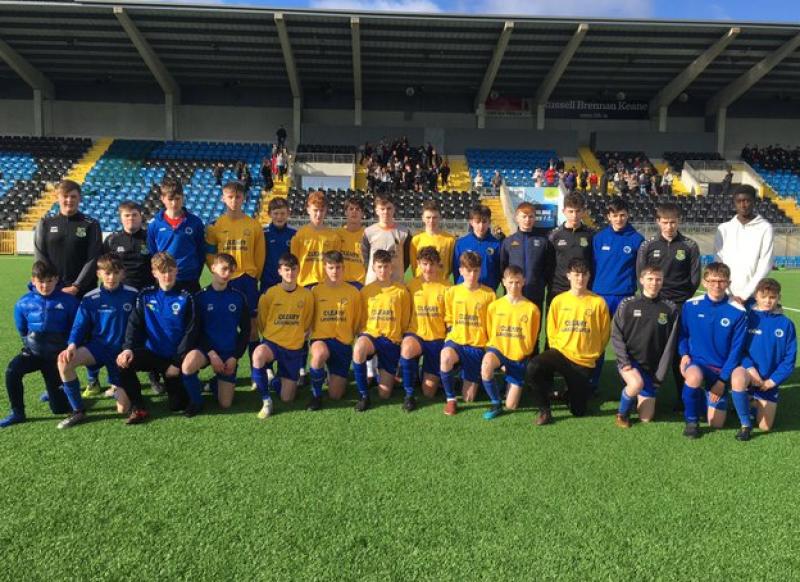 Heartbreak for the footballers of St Clare's Comprehensive on Thursday afternoon as they were dramatically beaten by Gaelcholaiste Luimnigh 4-1 in a penalty shootout after leading by two goals at halftime.

St Clare's, under coach Anthony McDonald, got out of the traps quickly and a fifth minute goal, set up by a cut-back from Diarmuid Giblin, from Patrick Montgomery at the second time of asking gave them the early advantage.

GC Luimnigh keeper Colm McElwain made a superb save to deny Cathal Og O'Connell after 26 minutes and the Limerick keeper did the same again to prevent Eanna Clancy from doubling the lead. But on the stroke of halftime, there was no stopping Gabriel Gilbride from finding the net.

St Clare's led 2-0 at the halftime interval and seemed to weather the early storm but GC Luimnigh were starting to increase the pressure, having a goal ruled off for off-side before Dara Hough goaled on 66 minutes to pull one back. Limerick's Eoghan Burke and Patrick Montgomery both had chances at either end as it looked as if St Clare's might hold out.

But three minutes before full-time, Scott McAvoy equalised with Hough going very close to a winner a minute later. The game ended 2-2 with the teams heading into extra-time.

Nobody could find a winner in the remaining time and so the game went to penalties. St Clare's had won the Connacht Final in a penalty shootout but had to endure the other side of spot-kick drama this time as GC Luimnigh won out 4-1 on the day.

SEE NEXT WEEK'S LEITRIM OBSERVER FOR FULL REPORT AND PICTURES.