Now, I’m sure all us sports fanatics all love our families dearly but the past week has been a bit like Christmas Day on steroids! 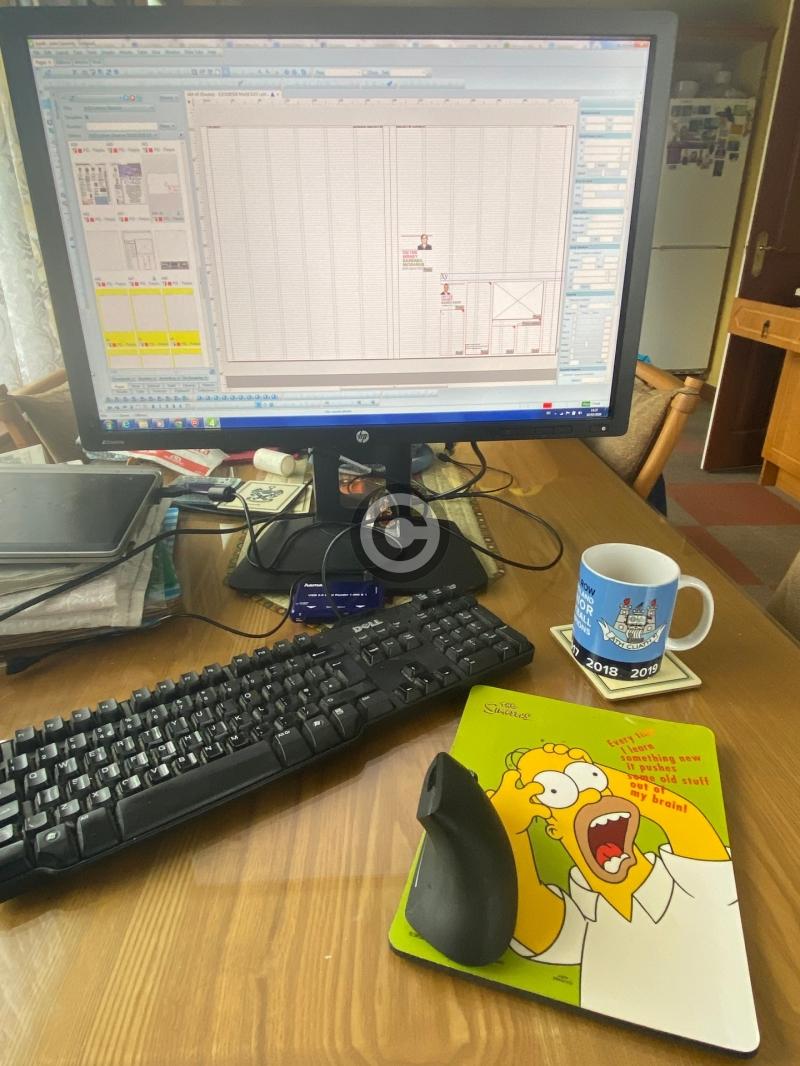 Empty pages to be filled - working at home is not all it is cracked up to be!

Starting this new column is a bit like starting the training session you absolutely dread - you know it needs to be done, you know you’ll be the better of it when it's over but sitting here, in my kitchen on a Wednesday evening at a time when I’m normally off organising a training session, it seems easier to sit on my butt and wonder why!

You just don’t realise how much your life revolves around sport until it's taken away from you - well at least I didn’t.

Imagine being a sports fanatic this past week as event after event is cancelled as the live sport from all around the world is halted just as quickly as if you stood on your brakes in the car.

It's got so bad that all us sports fanatics are desperately waiting to see if the Australian Rules Football season gets the go-ahead this weekend - expect us all to start tearing the sleeves off our jerseys and roaring “Put another shrimp on the barbie” if the AFL survives and makes it to our TV screens for any length of time.

Frankly, there’s a madness to it that inspires a sort of madness for if this is a partial lockdown, God help us sports fans if a total lockdown has to come into force.

A weekend without sport - It might be the dream of half the population - you’ll certainly get no cliches from me over whom the half of the population might be but at the moment, every day seems like Christmas Day multiplied by 10!

You know - Christmas Day when the whole world stops and actually takes a breather from the world of sport, spending time with family and friends and enjoying each other’s company - you know, going stir crazy without your daily fix and having to be happy about it!

Now, I’m sure all us sports fanatics all love our families dearly but the past week has been a bit like Christmas Day on steroids!

No chance to get out to watch some match that will have you screaming your head off and tearing your hair out.

No chance to blow off a bit of steam by wishing death on your mortal enemies, in the sporting sense, that is!

Secretly wishing that the clock ticks away to 5pm and you might be able to catch a little of the NBA on the TV as those godless heathens in America insist on capitalising on a captive market by broadcasting four or five games back to back.

And I’m sure it's no fun for our families either!

They can’t escape the highs, the lows that accompany the sight of a ball crossing a line on a green field, or a little white ball dropping ever so slowly into a hole! Or maybe just hanging on the edge!

We’re coming up on the first full week of what is still being described as a partial lockdown and we’re all climbing the walls! Well, at least I am and this was supposed to be a make or break week in Leitrim sport.

Just last Thursday I was contemplating a long trip over and back across the country in the company of my great friend Willie Donnellan.

Now, anybody that’s shared a journey to and from a Leitrim match with Willie will tell you it’s an experience to savour - the optimism, the pessimism, the jokes makes treks like the two and a half hour slog across the country seem like a spin out the road as every kick is analysed, every word pared down and the prospects for glory or doom proclaimed.

Of course, the announcement of the partial lockdown last Thursday brought about some deep, philosophical questions - just how am I going to fill the 15 plus pages that were supposed to be full of sport in today’s Observer!!!

Thankfully, mercy was shown and pages were pulled back - no easy task but if Thursday was filled with wondering what I was going to do, Friday was devoted to a sort of giddy “I wonder how long this is going to last” and the sort of speculation beloved of sports fans - what happens if …., I wonder if .... , do you think …. and so on and so on.

That giddiness didn’t last long let me tell you as the auld outlet of a training session with Carrick AC on Friday evening was suddenly gone, vanished on the wind as we all adjusted to the new reality.

Saturday was the day the vanishing sport scene really hit hard - no early match on Sky, no match full stop and finally no trip to Newry (although I have to admit that might not be as big a disappointment as some of the others).

Thank God, there was some salvation - and thank God for ESPN!

Sky and BT Sport started showing old documentaries from the American channel’s 30 for 30 on some of the great sporting stories of the past and suddenly, I was like the addict getting his fix. A documentary on Greg Lemond’s epic battle in the 1986 Tour De France with Bernard Hinault soothed the withdrawal symptoms somewhat and suddenly you found other gems to digest.

Another ESPN classic on Shoeless Joe Jackson and Pete Rose, Shoeless Joe maybe only being familiar to the vast majority of Irish people through the films “Fields of Dreams” an “Eight Men Out” - watch them if you get a chance, you'll get the your sports fix and they're two good movies.

TG4, God Bless them, weren’t found wanting - instead of the All-Ireland U20 Semi-Finals which would have featured my beloved Dubs, we got a double helping for the Boys in Blue. Alan Brogan’s Laochra Gael was entertaining but the real gem for me was the All-Ireland Gold featuring Dublin and Armagh in the 1977 All-Ireland Final.

I’d love to say I was there but as a young seven year old, I didn’t quite make it to Croke Park that day, content instead with jumping around and marking the living room floor every time the Dubs hit the net (my mother was certainly not pleased) before running out like a lunatic to kick ball with the neighbours on Clancy Avenue in Finglas.

Unfortunately, my first experience of All-Ireland Final day came a year later but I don’t really like to talk about that except to say that my most vivid memory of the game was the flying arm of a celebrating Kerry fan smacking off the head of an already put out young Dub. It's the reason why I celebrated the five-in-a-row as if we never won one before!

Anyway back to TG4, the 1994 Connacht Final might be on Eir regularly but it’d be nice to see it on the Irish language station too - that would certainly alleviate the gloom.

Monday was a strange day - it was back to work after what must have been, except for holidays, one of the rare weekends without a game over the last 30 years. Only it was different, this time the office in the kitchen and no workmates to chew over the stories from the weekend - certainly, our by now traditional lunch out with Fiona, Philip & Leonie was definitely missed.

But last Monday was also supposed to be Merseyside Derby day in Goodison Park and although I go into each and every derby in living terror of a hiding (you’d have thought I’d have got used to it by now) the thought that my beloved Toffees might throw a spanner in the works of Jurgen Klopp’s well-oiled machine keeps me coming back like a moth to the flame.

As an aside, the Premier League has to be declared null and void at this stage, doesn’t it? Only saying as a concerned Evertonian!

Back to Monday and work as I found trying to pull together a few stories and work out what might appear in the paper when nothing is on is just as difficult as trying to figure out where we might fit everything in when everything is on - different problems, same receding hairline!

A chat with Enda Stenson on Monday evening provided enough of quotes for Wednesday’s edition but to me, it showed the sort of man our new County Board chairman is, a man full of passion for gaelic games but more importantly, his empathy and concern for others and country in general shone bright in his words.

That empathy was replicated in the clubs of the country on Tuesday as they rallied round their communities, offering help, assistance and maybe just a shoulder to cry on. It is a truly remarkable outpouring of goodwill and community spirit and one that gives you the confidence that the country can get through all this.

Sometimes I have to admit that I see the GAA purely in sporting terms - after all, it’s hard to see the community ethos sometimes in the pursuit of glory by both club and county teams but this week, at this tough time, I see it and I’m proud of it.

Wednesday, today, sees the end of the first week of the Covid-19 crisis as all those nice little hashtags are terming it. And already, there’s a new crisis - how in the name of God am I going to fill pages next week?