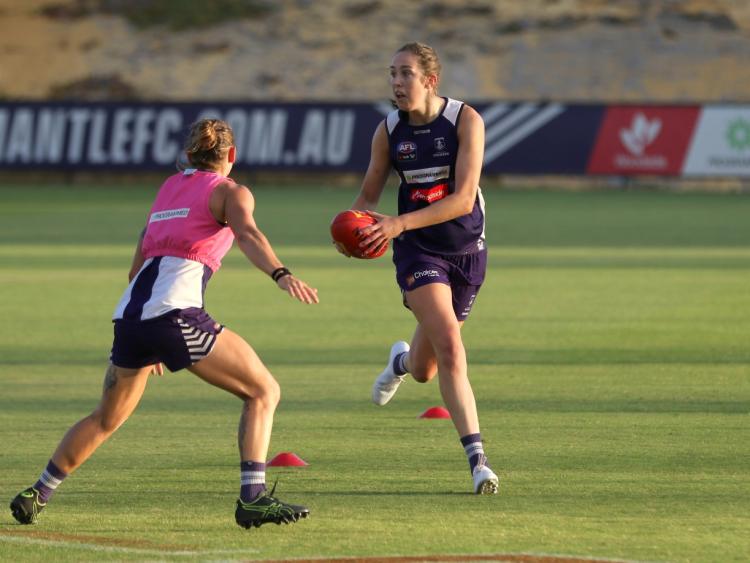 Aine Tighe in action for Fremantle Dockers during a preseason game

Injury may have derailed her experience but Kiltubrid and Leitrim's Aine Tighe is very much enjoying her Australian adventure with AFLW side Fremantle Dockers despite missing the entire season with the curse of a dreaded cruciate injury.

Aine was building up to be a big part of Fremantle's season before injury struck during a pre-season game against Adelaide on Saturday January 26, but six weeks later, the Kiltubrid sharpshooter is already setting her sights on next year's season with the Dockers.

"The aim is certainly to be ready to play next season," Aine told the Observer in an interview conducted by email, "It has been a phenomenal experience, the games have been really enjoyable and the club have been so supportive so that’s definitely the target. At the moment I am hoping to work through as much of the rehab as I can with the coaches and S&C guys over here.

"Obviously with the uncertainty around the world in relation to Covid-19 plans may change but at the moment I intend to spend a bit of time over here for now, hopefully get home for a bit over summer and then return and get ready for season 2021."

Having already suffered a cruciate injury once before, Aine knew the worst had happened before the club's doctors confirmed the news: "Unfortunately I knew straight away that the ACL was gone, it was obviously very disappointing but I guess those few days between the game and having it confirmed with the scans and the doc’s gave me a chance to get my head around it.

"It is something I have been through before so I do think that as disappointing as that is, that experience will help me get through the different phases of rehab this time around."

Recovery has been going very well for Aine: "Rehab has been going really well thankfully, I am just over six weeks post op at the moment so starting to be able to do more and more in terms of the rehab, building back up the strength, stability and control so it’s nice to be able to see progress week by week.

"I had surgery just over a week after the injury, I was lucky that the knee was in pretty good shape other than the ACL tear, I still had good stability, the swelling was under control and I had good flexion and extension so the surgeon was happy to operate straight away.

"In terms of overall recovery time the generic expectation is 9-12 months but it is very much milestone based as opposed to time, so for me it’s just about trying to build up strength and stability as much as possible and keep ticking off the milestones and moving onto the next stage of the rehab."

Going through rehab is a tough business as anyone who has ever suffered a serious knee injury can testify but Aine is full of praise for the care she has received from Fremantle Dockers: "It’s a massive part of the club and the culture over here in terms of looking after players and supporting them, so that was really reassuring to know that I would have the full support of the club throughout the rehab process.

"Obviously it’s a very different environment over here as a professional sporting organisation but the peace of mind of not having to worry about trying to book appointments or scans or worry about the financial side of surgery or physio is huge. It is definitely an area that I feel the LGFA can do more for players in, granted there are huge differences in the organisations but I still feel more can be done for players at home when they do suffer an injury."

READ MORE FROM AINE TIGHE IN THIS WEEK'S LEITRIM OBSERVER