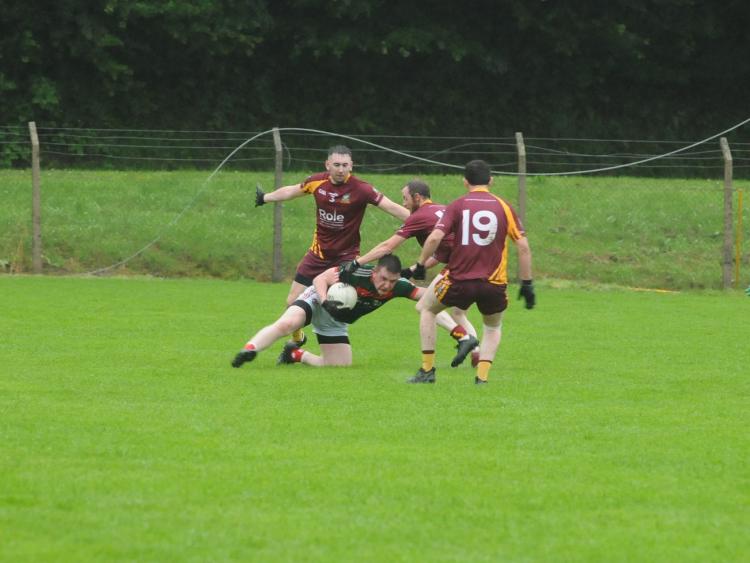 Three superb points from the inspirational Sean McNabola was just enough for Annaduff to sneak past a desperately unlucky and battling Kiltubrid in the first Leitrim Club Championship game of the year in Cloone on Friday evening.

The damp, dark and dank so called Summer's evening wasn't the best for football but these two teams defied the conditions and defied the long lockdown to produce an exciting Smith Monumentals Leitrim Intermediate Football Championship.

Annaduff probably were regarded as favourites going into this game but for long periods, Kiltubrid made a mockery of those thoughts as they produced some intelligent fast moving football that saw them keep their noses in from of the men in maroon & yellow.

Kiltubrid will rue missed chances in the first half, particularly from frees, as Annaduff hung on in there, managing to pull back to parity on a couple of occasions. Yet when they lost sub Mark Beirne to a black card, victory looked certain for Kiltubrid as they led by two points with ten minutes to go.

Yet that black card looked like a blessing in disguise as Annaduff players suddenly upped their intensity, started to win breaking ball and then McNabola kick-started the revival with a great point from play on 54 minutes. Two minutes later, a free was converted and McNabola completed his hattrick of points when Shane Foley was penalised for a pick-up under what was now intense Annaduff pressure.

McNabola converted the free and suddenly Annaduff were a point up. Mark Beirne came back on and made a contribution in a positive way with some big stops and interceptions and although Kiltubrid kept fighting in the almost five minutes of added time, all they had was a wayward Kealan McKeon effort.

It was tough on Kiltubrid who started brightly - McNabola converted a first minute free but Dermot McKeon and Emmet Mahon, now at the veteran stage for Kiltubrid, scored two excellent points. An Alan Glancy placed ball levelled the scores but McNabola and McKeon both missed chances.

Glancy edged Annaduff in front but a lovely Barry McWeeney point tied the scores. Kiltubrid realised the young McWeeney was a potential goldmine and they targetted him twice more, both landing excellent points, the second of which was almost an overhead kick!

Eoin Gill got on the end of a great move to score but a free from Emmet Mahon meant Kiltubrid led 0-6 to 0-4 at the break, although they were dealt a big blow when Kealan McKeon received a black card for a body check just before the halftime interval.

Alan Glancy pulled back a point from a first minute free but Mick McCormack then charged through the centre to fire over a spectacular 40 yarder for Kiltubrid. McNabola then put over two frees to tied the scores after 42 minutes but Kiltubrid looked in the ascendancy with another two monster McCormack points that put them two up with less than 10 minutes to go.

Unfortunately for Kiltubrid, they couldn't hold out but their management team of Ciaran McTague and Joe McCormack will take a lot of positives from this lively performance. A little bit more accuracy would have given them the cushion to hold off Annaduff's strong finish.

For Annaduff, they will feel this was one against the head but what a valuable win for a young side. They mightn't have been at their best but they know how to win games and that is priceless.

SEE THIS WEEK'S LEITRIM OBSERVER FOR MORE REPORTS AND WWW.LEITRIMOBSERVER.IE FOR THE LATEST NEWS