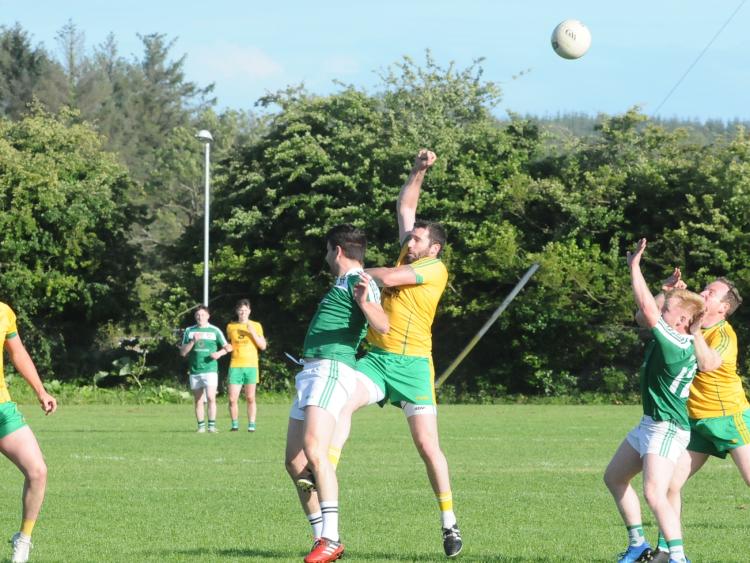 Ballinamore's Wayne McKeon battles with Mohill players for the ball late in the first half in Philly McGuinness Park Mohill Picture: Willie Donnellan

A spectacular clash of the titans in Mohill that was decided by a point and a comprehensive win for the competition's new boys were the big talking points of a fascinating first round of games in the Connacht Gold Leitrim Senior Football Championship on Saturday night.

With seven games taking place around the county, twitter and other forms of social media were being consulted regularly on sidelines up and down the county as fans kept track of some cracking contests in the Senior competition as well as the Smith Monumentals Intermediate Championship.

Ballinamore Sean O'Heslin's eeked out a hard fought 0-16 to 0-15 victory over a Mohill side who were a shade unlucky not to gain a point in a thrilling contest in Mohill. The teams were tied at eight apiece at the break but Mohill will look back on this one as a game they let get away from them as they led 0-7 to 0-2 at just 11 minutes.

Led by a superb Keith Beirne, the outstanding player on the pitch, Mohill looked as if they were going to overwhelm the visitors but Dominic Corrigan's Ballinamore steaded themselves and punished repeated indiscretions in the Mohill defence to go in level at halftime.

The second half followed the path of the first with Mohill starting well and Ballinamore hauling them back in until a monster Dean McGovern scored seemed to give Ballinamore late impetus to push on. They went two clear with points from Wayne McKeon and Tom Prior but Mohill pulled back a late score to leave just a point in it when the final whistle sounded.

The big story of the weekend was Leitrim Gaels' debut in the Senior Championship and what a spectacular one as they handed last year's semi-finalist Melvin Gaels a healthy eight point defeat, winning 1-15 to 1-7. The home side got off to a good start and were leading by two points when Melvin Gaels found the net early in the first half.

It remained tit for tat for a long period but a goal for Leitrim Gaels put them three points clear and they never looked back, leading 1-7 to 1-4 at the break. Melvin Gaels did bring a lot of pressure in the second half to get within four points midway through the half but they were unable to maintain their push.

Four unanswered points from the new boys saw them achieve an historic first Senior championship win and they will head into their bye week full of confidence they can make the quarter-finals.

Defending champions Glencar/Manorhamilton opened the defence of their title with a comprehensive 1-12 to 0-8 victory over Allen Gaels in Shane McGettigan Park Drumshanbo. A first half goal was needed by the champions to stay ahead of the Drumshanbo men as they led 1-4 to 0-5 at the break.

Allen Gaels put on a lot of pressure but were never able to close the gap and Glencar/Manorhamilton gradually extended their advantage to seven points by the final whistle in a nice opener for the champions.

Fenagh St Caillin's scored a hugely impressive win away from home when they had four points to spare over St Mary's Kiltoghert, 2-12 to 2-8. The Carrick men opened with two points but Fenagh's very first attack yielded a goal and they never looked back, although for a long time they were deadlocked on 1-2 after Mary's pulled back a goal.

But Fenagh hit an unanswered 1-3 just before halftime to open up a crucial 2-6 to 1-3 lead at the break, a lead they extended with three more points in the third quarter. St Mary's started a rally with a second goal but they were never able to close the gap enough to trouble Fenagh who scored a hugely important win.

In the Smith Monumentals Intermediate Championship, Ballinaglera broke Bornacoola hearts with a late goal from Enda Maguire in the last ten minutes. Bornacoola were leading at that stage, 2-12 to 1-14, after they had earlier staged a remarkable recovery having trailed 1-6 to 0-3 on 20 minutes.

A Cian Mallon goal got them back into contention to wipe out Wayne Reynolds' earlier goal, leaving them two points behind at the break. A penalty goal from Conor McCauley put them four clear and they looked headed for victory. However, they couldn't hold out against Ballinaglera's late finish.

Drumkeerin made it a profitable visit to Eslin with a 1-16 to 0-10 victory over the home side. Eslin started best and led by three points in the early stages but a strong Drumkeerin finish meant it was level at 0-6 apiece at halftime. The second half was dominated by Drumkeerin who saw Felim McHugh bury a powerful shot in the Eslin net on 38 minutes.

The north Leitrim side were never troubled after that as they ran out easy winners.

The final game of the weekend saw Gortletteragh defeat Dromahair 2-11 to 2-9 in the proverbial game of two halves. A Jack Heslin goal six minutes in put Gortletteragh in command and a penalty goal from Padraig Gallagher meant they led 2-7 to 0-1 approaching the break. Crucially, Dromahair pulled back a goal thanks to Darragh McMorrow but they still trailed by eight points at the break.

Dromahair gradually whittled down the lead but Gortletteragh didn't look under any pressure until Gary Fowley found the net after 30 minutes of the second half. That left two points in it but it was as close as they would come, Gortletteragh taking the victory.

SEE THIS WEEK'S LEITRIM OBSERVER FOR REPORTS AND REACTION