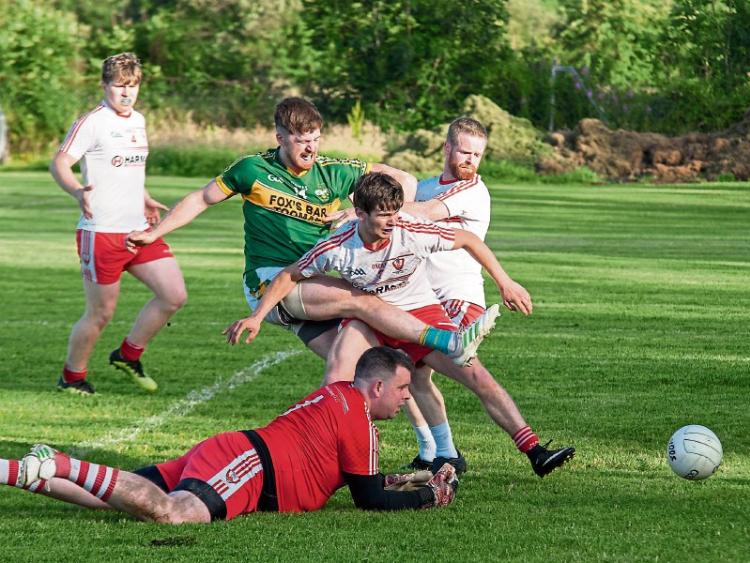 We love cliches in the GAA world and there is no better that “A game of two halves”. We certainly got that in Gortletteragh last Sunday as a dominant home team were glad to hear the final whistle after a late Dromahair fightback.

Both these teams were relegated last year and many would fancy them for the Smith Monumentals Intermediate title and Gortletteragh looked intent on making a quick return to the top grade as they led 12 points after 27 minutes.

But in a fightback that took time to fully build up steam, Dromahair showed they are a team to reckon with as they fought back to trail by just two points at the final whistle, Gortletteragh’s players and supporters relieved to hear the final long whistle.

Two former County senior panelists got the eye on the day, Jack Heslin for Gortletteragh and Cian Clinton for Dromahair.

It was Heslin who opened the scoring in the first minute from a free and they followed up with a point from play. Martin Feeney replied for Dromahair on five minutes from a placed ball but Gortletteragh soon took control, Heslin firing the ball to the net just a minute later.

Over the next six minutes, Gortletteragh would stretch the lead to seven points with a Heslin free and another from play. The scoring rate then slowed before another free extended the lead and then Conor Reynolds hit the target from play for the home side.

Gortletteragh looked as if they would run away with the game when Padraig Gallagher slammed a penalty to the Dromahair net with three minutes left in the half, leaving them 2-7 to 0-1 ahead.

Dromahair, however, gave themselves a bit of a lifeline when Cian Clinton got their first score in almost 25 minutes when he pointed from play and the north Leitrim men really gave themselves a massive boost when Darragh McMorrow goaled just into added time, leaving the halftime score at 2-7 to 1-2 in favour of Gortletteragh.

Dromahair came out a determined team in the second half and hit the ground running with three points in the first two minutes. Cian Clinton hit two from play, either side of an Adrian Fowley score as Gortletteragh’s lead was now back to just five points.

But Dromahair's scoring rate slowed and a Francie Flynn’s free 12 minutes into the half was the next score. Clinton and Flynn swapped frees over the next four minutes as Gortletteragh stayed six clear.

Another Dromahair surge yielded two points in the space of the minute, the impressive Clinton scoring from play and Martin Feeney scoring a free but Flynn replied for Gortletteragh again on 50 minutes to keep the visitors at bay.

Gortletteragh seemed to be holding out pretty well as Clinton (play) and Flynn (free) swapped scores going into added time but Dromahair really caused the home side to get nervous when Gary Fowley grabbed a goal just into added time.

That cut the gap back to just two points but there was no further time for scores as Gortletteragh held on for a valuable victory.

Gortletteragh have a bye next weekend before they take on Kiltubrid on August 1. Kiltubrid are in fact next up for Dromahair, the game down in the fixture list for St Osnat’s on Saturday although the Dromahair club notes state it will take place in Ballintogher so clarify where the game is before you travel.