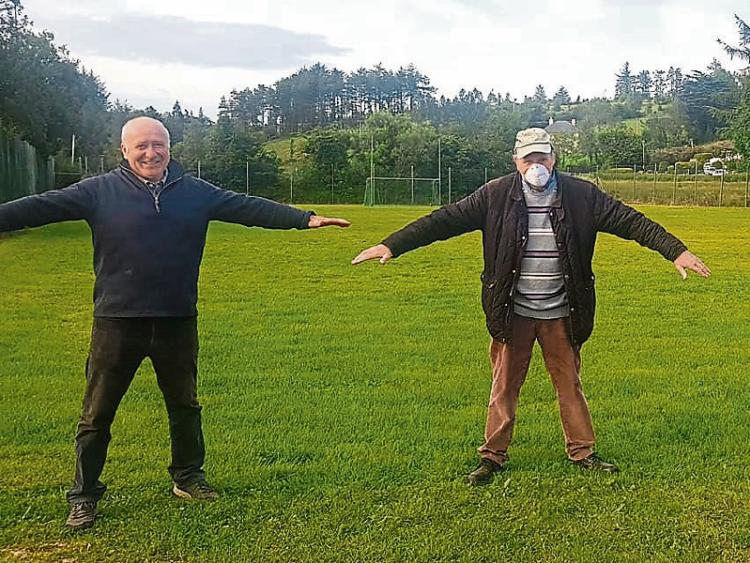 An opportunist goal from midfielder Enda Maguire three minutes from the final whistle proved to be the winning score for Ballinaglera in a rip-roaring Intermediate championship clash played in sunny conditions at St Hugh’s Park, Ballinaglera last Saturday .

The goal came after a stirring comeback from the home side who trailed by five points with 17 minutes left. The revival owed much to Seamie McMorrow & Wayne Reynolds, the diminutive corner-forward who caused all kinds of problems for the Bornacoola defence.

It also owed much to the Glera men’s traditional fighting qualities as they had looked dead and buried entering that final quarter. They did just about enough and manager Kevin Nolan will be delighted to have cleared his first hurdle, even if, at times, the performance left a little to desire.

For the Bors, this defeat will hurt. They went into the game without the experience of injured duo Damian Moran and Sean Mc Keon and took some time to find their feet. But once the Mallon brothers, Cian and Shane, began to get on the ball, they looked a force to be reckoned with and they will feel this was two points they left behind them.

Seamus McGovern was the first to find his range, and while Shane Mallon pointed an early free for the Bors, Glera, through two Seamie McMorrow frees, established an early advantage. Cian Mallon reduced the gap to a single point but then came a period of Ballinaglera dominance that saw them race into a six point lead.

It began with an excellent Patrick M Grail point before Seamus McGovern fisted over in the 14th. Then a long ball floated over the Bornacoola rearguard and found Wayne Reynolds unmarked with just Danny Farrell in goal to beat, and his well taken goal made the score 1-5 to 0-2 with 15 minutes on the clock.

The Bors did respond through a Shane Mallon point but as the teams retired for the mid-half water break, it was Ballinaglera who were clearly in control.

On the resumption, Wayne Reynolds pointed but it was now the Bors turn to dominate. It began when Shane Mallon pointed after a great catch to claim his mark and a minute later, brother Cian scored a stunning goal from a tight angle and the gap was down to two points.

Ronan Mulligan fisted over with two minutes left in the half and although Ballinaglera responded with points from Ciaran Cornyn and Reynolds again, a late Shane Mallon score ensured the game was nicely poised as the halftime whistle sounded with Glera leading 1-8 to 1-6.

Bornacoola looked a side transformed as the second half got underway. With Liam Jones and Anthony Mulligan finding a foothold in midfield and Jason Conroy pushing forward to good effect, it took only two minutes to tie the scores as Cian and Shane Mallon found their range.

McMorrow responded but the same Mallon double act, within 30 seconds of each other, gave the Bors the lead. Shane's point was so nearly a goal as he made a great catch, turned two defenders and rattled a thunderbolt off the top of the crossbar.

Bornacoola did have a goal eight minutes in after Ronan Mulligan was taken down and Conor McCauley blasted the penalty past Conor O’Brien. The lead stretched to five when Cian Mallon pointed and despite a McMorrow reply, it was Bornacoola who were in total control as the teams left the field for the second water break.

That water break proved crucial as it allowed the home side steady a sinking ship. As the final quarter got underway, Ballinaglera’s experience became more of a factor and they slowly chipped away at the Bor lead.

The reliable McMorrow traded scores with Ronan Mulligan and then added his sixth of the game. Wayne Reynolds reduced the gap to just two points and then a McMorrow free with five minutes to go left just a single point in it.

A free, 35 yards from goal appeared to offer the ideal opportunity for the equaliser, but Enda Maguire came short, picking the ball up 25 yards out. The Bor defence was static as he delivered a low shot to the right corner for a high quality goal that put the home side back in front for the first time in over 20 minutes.

Reynolds added a point with the game ticking into injury time but to their immense credit, the Bors still had a kick left and as they tried desperately to fashion a goal. They were awarded a 14-yard free straight in front of the goal from which Conor Mc Cauley pointed.

The Bors won the kickout and found McCauley on the edge of the parallelogram but his pile driver of a shot screamed mere inches over the bar. For Glera, a week’s break will allow them to recover from such an intense encounter and will hope to build on the positives in their next clash, away to Eslin on August 1.

For the Bors, injuries to Mervyn Howard and Kevin Mulligan will be a huge concern as they prepare to take on Eslin this Saturday. However, they showed more than enough here to be considered a threat to anyone in this year's Championship.