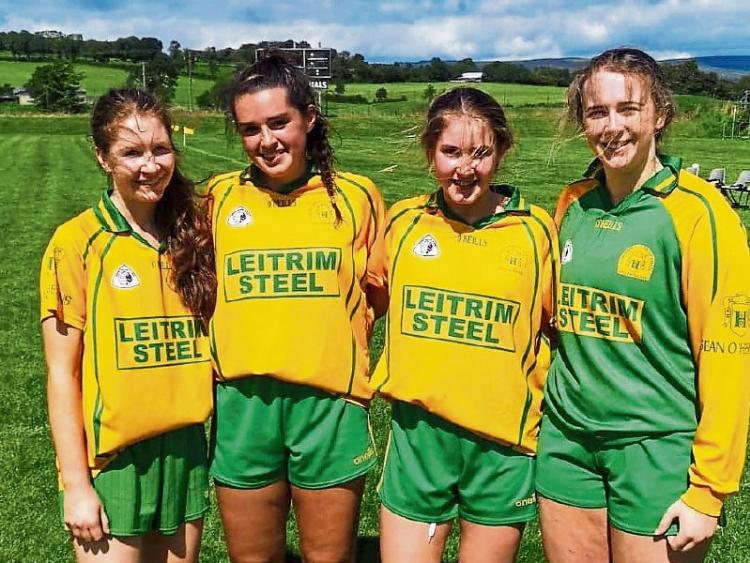 Ballinamore Sean O'Heslins & Glencar/Manorhamilton had very one-sided wins in the opening round of the Gotham Dry Wall New York Senior Championship as both hammered their respective opposition.

It may have been a derby but Ballinamore Sean O'Heslins began their senior championship with a very strong 3-20 to no score win over St Brigid’s at home last Sunday.

Sean O'Heslins got off to a great start with an attacking run from midfield by Ciara O'Dowd scoring a goal and follow up point in the first five minutes. Niamh Donohoe forced Maeve Quinn into a great score but the home side began to find their range.

A goal from Emma McGovern and follow up points from the O'Dowd sisters extended the lead. St Brigid’s began to find some breathing space and a great passage of play saw Siomha Quinn find Ella Quinn in space in front of goals but great defending from Lisa Maguire stifled St Brigid's attack.

O'Heslins kept the pressure on before the water break with another five points in quick succession scored between Niamh Donohoe, Emma McGovern and Aoibhinn Flynn.

St Brigid's tightened up defence after the water break and the Ballinamore women were not having as much freedom. Scores came from distance from the O'Dowd sisters and a free by Roisin McHugh.

St Brigid's were having periods of possession but they were unable to break down the O'Heslin back line. A poor clearance by Ballinamore gave the St Brigid’s a chance but the effort dropped short into the keepers hands.

From the counter attack, O'Heslins landed another goal from Laura O'Dowd. St Brigid’s Aoife Mannion flashed a shot across goal while Brigid’s, without the leadership of an injured, there was no change in the score.

The second half continued as the first with three quick points Laura O’Dowd. The scores continued to tick over with Megan McGovern hitting two while Maeve Quinn made a big save for St Brigid’s and Alannah Gunn did a great job in preventing a Laura O’Dowd goal.

Both teams rang in the changes with an impressive showing from Lily Byrne who scored a fine point and had a well placed kick saved by Maeve Quinn and out for a 45, taken by Gilgunn and finished over the bar by McHugh.

The new St Brigid's fought well throughout and never gave up on a tough championship game however the overall strength of the O'Heslins made easy work in the opening game.

Two time finalists Glencar/Manorhamilton scored a 31 point victory over St Francis last Sunday in Ballinaglera, setting the tone early in the game with a lot of attacks.

Ailbhe Clancy and Ailish Cornyn swapped points but Leah Fox followed soon with a splendid goal for Manor and from then, Manor seemed a step ahead even though St Francis squandered a lot of good possession.

The action in the second half didn't change as Glencar/Manorhamilton came out in the second period with the same hunger. Caoimhe McGarry & Roisin McGrenaghan worked hard in attack but didn’t get much return.

Zkasi Modi was the only forward that looked dangerous in the second half winning much ball and looked fearless no matter who marked her but St Francis did look tired chasing Glencar/Manor’s massive lead.

Glencar/Manor look even more formidable with Mary Alice Maguire, Aideen Clancy and Melissa Hewitt back in the squad which will be a good lift for their manager Pauric Corrigan and the team.

A tough learning lesson for St Francis but they have talent and, with a bit of work, they can still steal a few wins in this competition.

The game of the day in the Ladies Club Championship came in Pairc Naomh Mhuire where St Mary’s Kiltoghert overcame Keeldra Gaels in the McGovern Brothers London Intermediate Championship.

Keeldra Gaels started the first half with a strong wind at their backs and had a lead of five points but late in the first half, a challenge on St. Mary's Hannah Reynolds inside the square resulted in Aisling Leahy scoring from the penalty spot to give the home side some home.

It meant Keeldra Gaels went into the break with only a one point lead, 0-7 to 1-3, despite a strong first half display and St. Mary’s started the half with a quick point to level the game.

Sarah Reynolds was taken down inside the square for another St Mary’s penalty goal from Aisling Leahy.

Both teams then exchanged a number of goals each in quick concession with Keeldra’s Lisa Keighran and Niamh Reynolds scoring a goal each and Alanna Ward scoring two goals, Rosin Kellegher, Leahy and Kasey Bruen scored goals for St. Mary's.

Both teams registered a number of wides and missed opportunities but both tried very hard and displayed some fine football on their first championship game of 2020 as St. Mary's finished stronger to claim the victory.

Also in the Intermediate Championship, Mohill demolished Annaduff on a 9-11 to 1-6 scoreline while in the Junior grade, the B team of St Joseph's were successful with an incredible 11-10 to 2-6 victory over St Francis' second time. In the only remaining game, an incredible draw was fought out between Glencar Manor and Drumkeerin that finished 5-10 (Manor) to Drumkeerin's 6-7.