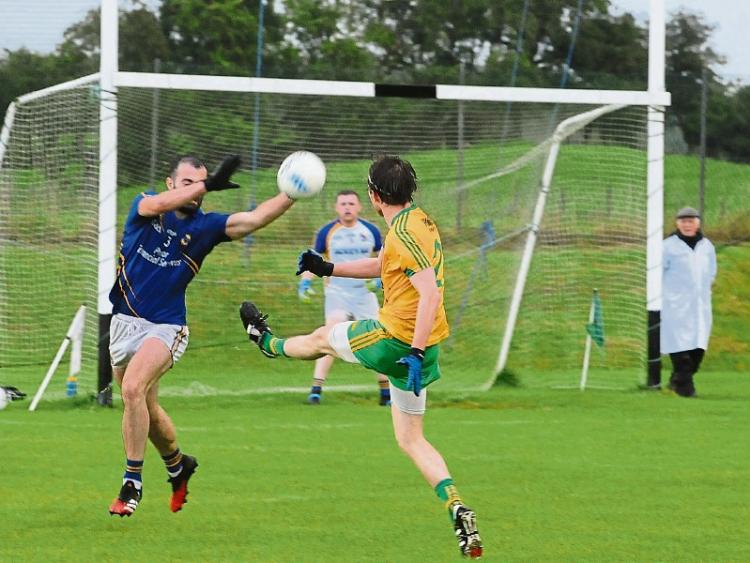 It wasn't a freewheeling classic but Ballinamore Sean O'Heslins underlined their championship credentials by seeing off the challenge of fierce rivals Aughawillan in a real arm wrestle of a game last Saturday in Pairc Sheain Ui Eslin.

The weather didn't help either team produce free flowing football but with both teams going out to make sure the opposition didn't do them any real damage and it worked in a tense, physical encounter where doggedness and commitment was all.

And just like they did against Mohill, it was the Ballinamore men who finished strongest, holding Aughawillan out and dominating possession as they added two killer points from Andrew Burns and Shane Moran to seal victory.

Both teams went into this game understrength: Mark Plunkett and Wayne McKeon didn't start, Luke Murphy was forced out of the game while Rory McTague pulled up late in the game with injury.

What either team will learn from this game is hard to know but what we do know is that the path to the Fenagh Cup will likely go through Ballinamore this year.

With rain pouring down, both teams adopted defensive postures but a free from Shane Moran opened the scoring three minutes in. Gary Plunkett put over a free but missed chances and wides characterised the start as much as anything else.

Ballinamore suffered a blow on 10 minutes when Luke Murphy was forced off but Tom Prior claimed an excellent mark on 12 minutes to fire his team in front. Niall Stringer was first into the referee's book, soon followed by Brian Banks, Gary Plunkett levelling on 17 minutes from the free.

After missing a number of frees, Ballinamore turned to Niall McGovern who drove a 40 yard free off the ground high over the bar on 23 minutes. Aughawillan blood sub Daire Maxwell also went into the book for an off the ball foul on Keelan McHugh.

Morgan Quinn scored a wonderful effort, curling a lovely shot over the bar two minutes before the break. However, the big moment came just into added time when Aughawillan won a ball back but lost it to Tom Prior.

Full-back Fergal McTague reacted instantly by dragging him to the ground with referee Gareth Foley issuing a black card and Cathal McHugh expertly sweeping a 35 yard free from the right wing over the bar.

Keelan McHugh’s run opened space for Tom Prior to fire over a brilliant effort from the corner as it looked as if Ballinamore were starting to take control.

Shane Moran could have ended the game when he somehow fought his way past two or three would be tacklers after making a high catch but he found Colin Maguire equal to his shot, the Aughawillan man making a vital save.

But true to their tradition, Aughawillan dug in and fought their way back into the game. Straight from Moran’s goal chance, they went down the field and Gary Plunkett converted another free.

And just before Fergal McTague came back on, great work from Barry Prior saw him work the chance for Pearce Dolan to point, cutting the gap back to a point.

Strangely now that Aughawillan were back at full-strength, Ballinamore reacted best with Barry McGovern winning two frees that were converted by his brother Niall and Tom Prior to open a three point gap on the three-quarter mark.

Back came Aughawillan after the water break with Morgan Quinn and Gary Plunkett both converting frees in the space of a minute, setting up what seemed like a grandstand finish with ten minutes of normal time left.

Yet it was Ballinamore who dominated the closing minutes -sub Andrew Burns got on the end of a great move and his fantastic point from out on the right wing was a huge lift for the home side with six minutes to go. And then Shane Moran stretched the lead to three points two minutes later.

Aughawillan kept fighting but it was Ballinamore who continued to create chances, sub Peter Reynolds hitting a wide while Dean McGovern saw a good shot glance off the upright and go wide but the misses didn’t cost them as Aughawillan never got close to the goal they needed to level the game.

Covid update: No deaths and 1.205 cases of Covid-19 confirmed

Leitrim lose to Tipperary and fall to Division 4

Perfect Timing! Here's everything new on Netflix for the Bank Holiday weekend