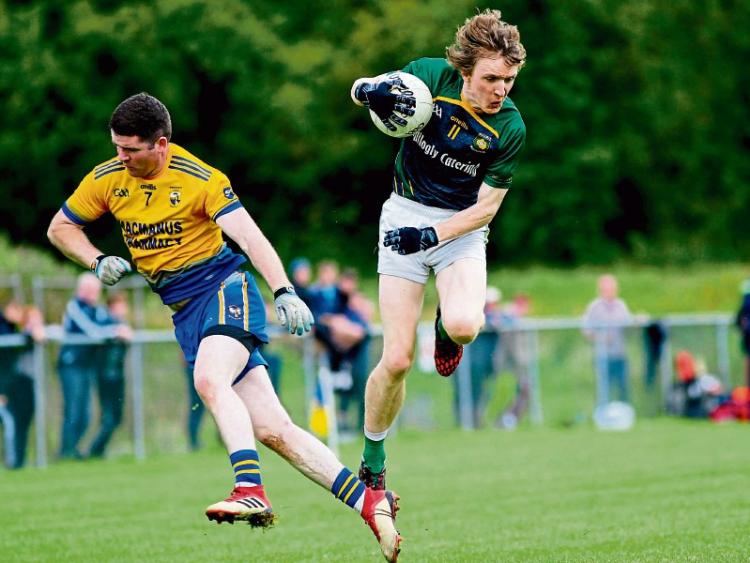 Drumreilly's Ray Fee leaps out of the way of a challenge from Glencar/Manor's Killian McGriskin last Saturday in Boggaun Picture: Willie Donnellan

After leading by seven points at halftime, Glencar/ Manorhamilton managed to secure a much narrower winning margin over a never say die Drumreilly side on Saturday evening on the home turf at Boggaun.

Drumreilly struggled in the first half, probably due to the fact that it was their first championship outing whereas Glencar/Manor had tasted the red-hot championship heat a week earlier when they accounted for Allen Gaels in Drumshanbo.

A Peter Prior Drumreilly goal prior to halftime put his side right back in contention after they had played second fiddle up to that in the exchanges.

It also signalled a change in the game as Drumreilly began to get to grips with their defending county champion opponents, who now had only four points to spare at the interval.

Drumreilly managed to outscore Glencar/Manor by six points to five in the second half after missing what was perhaps two goal chances as well, but still came out second best.

Glencar/Manor, who played with 14 men due to a Killian McGriskin black card 10-minute dismissal and had a penalty claim dismissed late on, used their greater experience to good effect as Drumreilly bid to turn the tables on them.

Evan Sweeney and James Glancy put Glencar/Manor two up in the opening five minutes when they both split the posts in turn. Drumreilly opened their account on the eight minute mark after Raymond Fee converted a free for which he was fouled.

Fee put over another free a minute later but in response to Drumreilly’s early fight back, a determined and rejuvenated Glencar/Manor hit over seven unanswered points during the next 19 minutes.

James Glancy and Niall Brady shot a point apiece from the advanced mark after Aaron Hickey was the ball provider for Glancy and Glancy acted in a similar role for Brady.

During this period, single points were added to the tally by Glancy, Adrian Croal, Killian McGriskin, Aaron Hickey and Evan Sweeney.

Glencar/Manor’s Cian McManus was the recipient a of a 22nd minute yellow card and Drumreilly got their game back on track when Peter Prior fired to the near corner of the net from 13 metres out on the right wing on 29-minute mark.

Glencar/Manor led by 0-9 to 1-2 when the halftime whistle was sounded but Drumreilly reduced the deficit within a minute of the restart thanks Stephen Meissner who hit over a well taken point.

However, over the next four minutes Glencar/Manor hit three points without reply when Peter Poniard and Niall Brady, after receiving a pass from Aaron Hickey, scored while then Hickey converted a ‘45.’

A 37th minute yellow card was issued to Drumreilly’s Damon Maguire. Nevertheless, Drumreilly got on top in the exchanges during the next 12 minutes when they whittled back the Glencar/Manor lead to three minutes after hitting three points on the trot.

Glencar/Manor’s Killian McGriskin received a 40th minute black card after he took down Conor Gaffney as the former county man bore down on goal. Gaffney tapped over the resultant 13 metre free and did likewise a minute later with another free.

As the end of the third quarter approached, an alert goalkeeper, Colin Gilligan stopped a goal bound Raymond Fee effort which rebounded to Stephen Meissner who whipped the ball over.

In the final quarter Manor’s Aaron Hickey shot over from play and a free. Late on in response Drumreilly’s James Holohan and Raymond Fee, who slightly before that was yellow carded, got a point each.