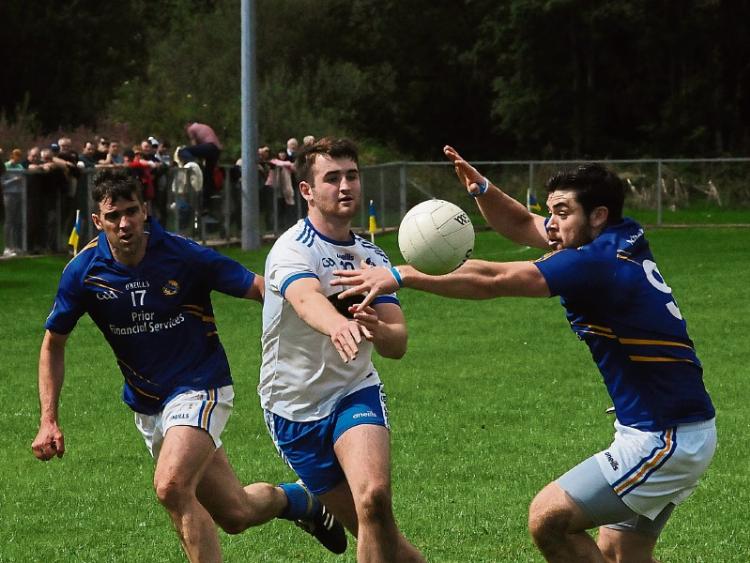 Dead and buried a week ago after their loss to Mohill, dead and buried last Monday when Aughawillan took the lead just into injury time, an inspired St Mary's rose like a phoenix from the ashes to claim an absolutely huge Connacht Gold SFC victory.

With this game postponed due to a waterlogged pitch on Saturday, you couldn't have got a greater contrast with a fabulous surface and warm sunshine. And while the football for long periods struggled to match the conditions, the dramatic ending we got was the stuff of fairytales.

Down six points at one stage, Aughawillan looked as if they had pulled an “Aughawillan” again when they went a point up a minute into added time when Sean Flanagan converted his second penalty with ice-cold blood in his veins.

Crucially Aughawillan had two good chances to kill the game but failed to take them and a wonder point from Ray Mulvey gave St Mary's a draw at least. But the drama was only getting going - a misplaced kickout turned possession over to St Mary's.

A quick sideline ball found Oisin Bohan unmarked in the corner. He flew by Sean Quinn and floated the ball across the face of the goal where a flying Daire Farrell came in at speed to fist the ball to the net for a dramatic winner.

Aughawillan were quick out of the blocks with Morgan Quinn tapping over a free inside 40 seconds while Gary Plunkett added a second free two minutes in. St Mary’s settled with a Mark Diffley point after a good move.

But St Mary’s fans were scratching their head when Robbie Lowe intercepted the resulting kickout and went through, playing the ball across to an unmarked Alan Doherty who dived full length with the goal at his mercy only to see the ball hit the post and rebound clear, the St Mary’s man injured in the process.

It looked like a double whammy as Aughawillan went straight down the field. Conor Farrell got caught out by a high ball, Sean Flanagan ran in and was taken down - penalty. Flanagan picked himself up to decisively slam the ball to the net after just four minutes.

Instead of inspiring Aughawillan, it was the visitors who reacted: Paul Keaney put over a free while Oisin Bohan scored a nice point from play on 15 minutes along with four missed shots. Bohan added a free on 17 minutes, just before the water break.

St Mary’s were finding holes in the Aughawillan defence and a great move ended with James McGrail playing in another veteran in Robbie Lowe, a neat sidestep from the former county man completing the goal.

A rattled Aughawillan picked up a few yellow cards but they had Colin Maguire to thank for a wonder save that denied David O’Connell a certain goal. Fergal McTague finished off a good Aughawillan move with a point but a free from Alan Doherty gave St Mary’s a 1-5 to 1-3 halftime lead.

Aughawillan closed the gap with a good Barry Prior point after good work from Sean Flanagan but had missed an easy free from Gary Plunkett in front of the post while St Mary’s missed two placed balls.

That didn’t seem to matter when another good move ended with David O’Connell being fouled, Alan Doherty sending the ball to the net and now St Mary’s were four points up after four minutes of the second half.

Sub Daire Farrell fisted over a point five minutes later before Aughawillan got their first score of the half when Ciaran Gilheany converted a free. Both teams had efforts go wide but St Mary’s looked as if they were sealing victory when Doherty & Ray Mulvey converted frees.

But the drama was only getting going - a huge delivery saw Morgan Quinn brilliantly field the ball behind the Mary’s full-back, a neat finish followed and the lead was cut in half with just over five minutes of normal time left.

Morgan Quinn immediately landed a free before Ciaran Gilheany left just a point between the sides with more than two minutes of normal time left. Ray Mulvey responded with a brilliant point after a period of patient St Mary’s play.

But it looked as if another miraculous Aughawillan escape would occur when Gary Plunkett launched another high ball into Mary's goalmouth. Morgan Quinn won the ball, was clearly taken down and Sean Flanagan sent the spot kick unerringly to the net.

Aughawillan had two great chances to kill the game but Ciaran Gilheany and Morgan Quinn both shot wides, costly when St Mary’s went down the field and Ray Mulvey fired over a brilliant equaliser from the right hand wing.

From that kickout, the ball went over the sideline leading to Daire Farrell's dramatic match winner. Aughawillan kept trying to work an equaliser but St Mary’s packed their defence, ensuring no clear cut chances and a famous victory for the town team.