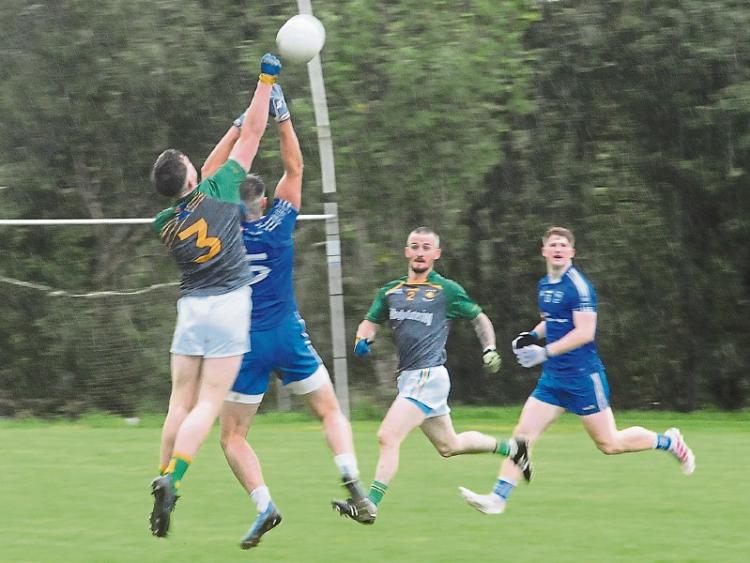 Putting on what was one of their best displays for some time, Melvin Gaels completely outclassed a Drumreilly outfit that never got to grips with the Kinlough men in Saturday’s showdown in quite damp weather conditions at Carrickmakeegan.

Melvin Gaels took control from early on and forced Drumreilly to play second fiddle for the remainder of the action. Drumreilly always appeared to be at sixes & sevens whenever they attempted to cope with the well drilled Gaels machine.

Having got on top from early on in the encounter Melvin Gaels grew steadily in confidence the longer the game went on.

Emlyn Mulligan led Melvin Gaels early charge to stamp his side’s authority on the proceedings when he whipped over two points, one from a free and the other from play in the opening five minutes.

At this stage Drumreilly had just made only one or two unsuccessful sorties into Melvin Gaels territory. Each time the watertight Gaels defence snuffed out the Drumreilly attacking moves with clinical efficiency.

After what was quite a frustrating phase of the game Drumreilly they drew first blood when Raymond Fee pointed a 14th minute free that only reduced the Melvin Gaels advantage to five points.

The Melvin Gaels dominance continued with Ciaran Clancy from play and Emily Mulligan from a free putting a point apiece by the 17th minute. Drumreilly responded with a point from Graham Taylor five minutes later.

Emlyn Mulligan stretched the Gaels lead further when whipped over a 23rd minute free. Drumreilly goalkeeper Damon Maguire made a terrific save to deny a Cillian McGloin goal bound shot three minutes later but the rebound came to Darragh Rooney who fired over.

During the run-in to halftime Emlyn Mulligan pointed another Melvin Gales free after Mick Holohan committed a foul for which he was yellow carded, while shortly afterwards Darragh Rooney added a Gaels point.

Before the interval Conor Gaffney shot over for Drumreilly but Melvin Gales still led by 0-12 to 0-3 when referee Patrick Guckian sounded the halftime whistle. Caolán Clancy stretched Melvin Gaels' lead within a minute of the restart when he fired over for the visitors.

At the other end Melvin Gaels goalkeeper Gareth Phelan made a smart save to deny a Graham Taylor goal bound effort and shortly afterwards Drumreilly’s Damien Mitchell received a yellow.

Things got worse for Drumreilly three minutes later when Conor Sheridan shot home a 42nd minute goal and Emlyn Mulligan pointed a free. Drumreilly worked a consolation 49th minute goal that was finished to the net by Jimmy Holohan after Peter Prior put the ball across for him.

In the closing action of the game Ciaran Clancy added a pair of points for the Gaels, while after that Conor Gaffney and Emlyn Mulligan swapped points at opposite ends from frees.