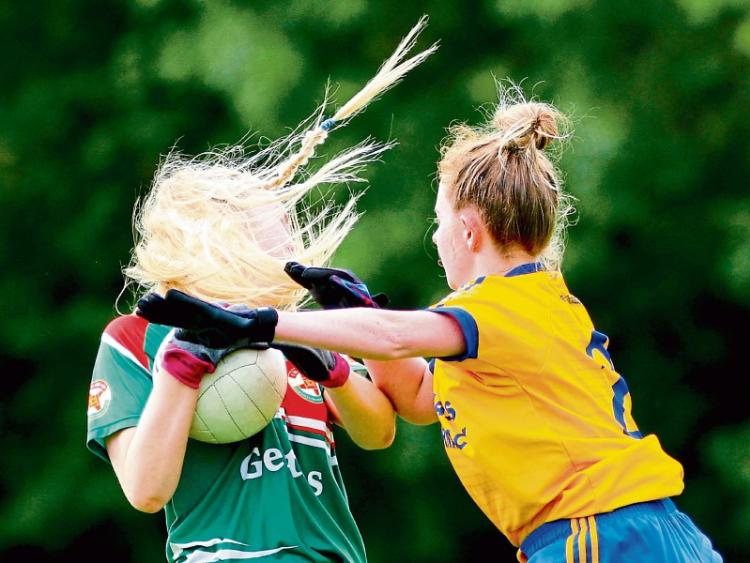 A hair-raising experience for this Kiltubrid player as she is tackled by a Glencar/Manorhamilton opponent last Sunday in Boggaun Picture: James Molloy

After completely dominating the exchanges from start to finish, Glencar/ Manorhamilton easily brushed aside the challenge of Kiltubrid in Sunday’s Leitrim Ladies senior football championship clash in the Community Pitch at Boggaun.

When these sides clashed in last year’s Leitrim semi-final in Cloone it was quite a close-run and nail-biting affair before Glencar/Manor emerged as eventual victors.

On Sunday morning it was an entirely different match-up as the home side toyed with the visitors at more or less all stages of the game, except for a very brief period after the restart when it looked like Kiltubrid might make a game out of it.

After losing out to St. Joseph’s in last year’s county final, Glencar/Manor has certainly set down a major marker for this year’s Leitrim championship. The Manor women have firmly established themselves as the team to beat with just two rounds of the competition played as the only team with a full set of group table points registered.

It was in the opening ten minutes that Glencar/Manor established supremacy with Kiltubrid when hitting over seven unanswered points. Muireann Devaney shot five points with just one of them a free while Ailbhe Clancy and Leah Fox both converted frees.

After a slow start when they spent very little time in Glencar/Manor territory, Kiltubrid eventually got their account opened after Aoife McWeeney shot over a well taken 14th minute point, despite being put under considerable pressure by the tight marking defence.

Glencar/Manor continued to set the game’s agenda with Clancy and Devaney (free) adding a point each by the 20th minute. Michelle Guckian kept Kiltubrid in the frame when she answered with a pointed free a minute later.

Karen Connolly clinically struck for Glencar/Manor’s first goal on the 25-minute mark after she was put through by Aisling Clancy. Michelle Guckian replied with a converted placed ball that left her side trailing by 0-3 to 1-9 at the break.

Devaney extended Glencar/Manor’s lead within two minutes of the resumption when she fired over the crossbar. Kiltubrid responded with a cleverly executed goal within two minutes when Emma Guckian placed her effort in the top right hand corner of the net and well out of the reach of goalkeeper, Eimear O’Connor.

With this score, Kiltubrid had cut the Glencar/Manor lead back to seven points but any hopes of a revival by the south Leitrim women was quickly snuffed out by the home side over the next nine minutes when they hit an unanswered 1-2 in a decisive response.

In this spell Aisling Clancy and Dearbhla Rooney whipped over points while Muireann Devaney fired to the Kiltubrid net after her Glencar/Manor teammates put together a good attacking and defence splitting move.

Emma Guckian answered with a 45th minute point for Kiltubrid. Almost immediately at the other end Kiltubrid goalkeeper, Miranda Burke Foley pulled off a superb save when she denied a close-range goal bound Leah Fox shot.

Glencar/Manor continued to show no mercy to Kiltubrid as was evidenced when Muireann Devaney hammered home a 53rd minute goal. Michelle Guckian responded with Kiltubrid’s last score in the game two minutes later when she converted her third free of the day.

The home side ran out easy winners in the last five minutes of the action with Aoife Gilmartin, Amanda Sweeney, Ailbhe Clancy and Muireann Devaney all chipping in with a point each for a rampant Glencar/ Manor.