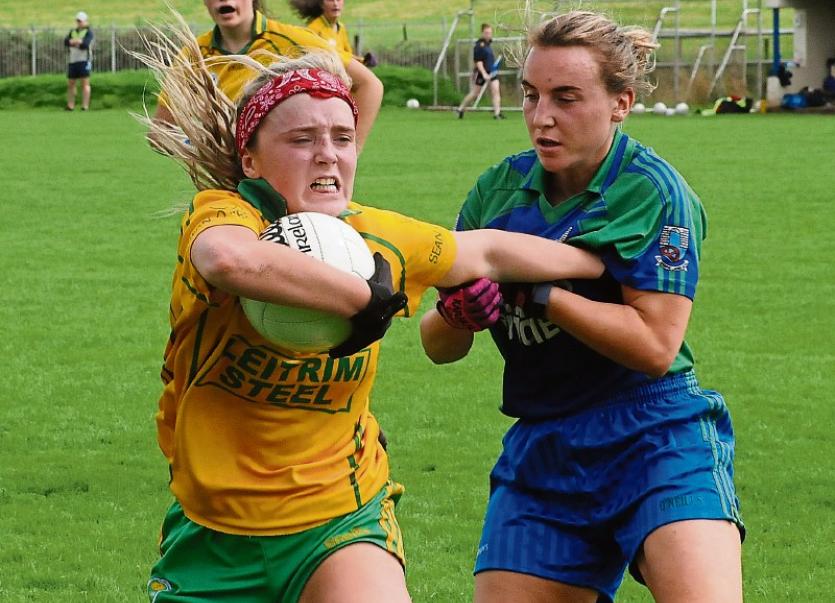 Emma McGovern and Vanessa Gallogly battle for the ball

Something for everyone and a fair result at the end of this thrilling Gotham Dry Wall Ladies SFC clash in Carrigallen last Sunday with spectators the real winner after a great contest.

Champions St Joseph's showed their mettle as they came from seven points down at one stage to force a draw and they might even consider themselves unlucky that they didn't come away with the victory.

But this was the day that Ballinamore announced they are a real threat for the title, a young team showing a relish for the battle and no little skill and nobody would want to underestimate this team who are full of running, power and skill in the ball.

Either team could have won this - Ballinamore had a few more goal chances when they were on top while St Joseph's missing a penalty and kicked some bad wides so the draw was the fairest result. It will be some rematch if they meet later in the championship.

Wides were the order of the day early on, the biggest being a goal chance brilliantly created by Roisin McHugh and Laura O’Dowd but McHugh’s powerful shot skimmed off the outside of the post and went wide.

Bronagh O’Rourke (free) and Laura O’Dowd swapped frees before O’Rourke gathered a lovely pass inside the defence to fire over on ten minutes.

But the champions were rocked three minutes later when Emma McGovern’s long shot from the wing evaded both Roisin McHugh and keeper Kiera Masterson and rolled into the far corner, giving Ballinamore an enormous boost.

Grainne O’Malley hit back with a good point while Michaela Harte did well to stop a dangerous bouncing ball but it was St Joseph’s who were left reeling when Emma McGovern and Eilish O’Dowd put together a wonderful flowing move and then popped the ball out to unmarked Ciara O’Dowd for a killer goal on 16 minutes.

St Joseph’s almost got a goal when Michaela Harte almost spilled a high ball into her own net but a goal did come, at the other end and again it came after a great move with Laura O’Dowd and Roisin McHugh combining to put Emma McGovern free for a killer goal on 22 minutes.

Bronagh O’Rourke scored her third of the half from a free on 26 minutes but St Joseph’s were dealt a blow when Grainne O’Malley was yellow carded for a collision on Megan McGovern.

But during the ten minute O’Malley sin-binning, St Joseph’s produced their most productive period of the game. Roisin McHugh made a great catch and ran through to score but just before halftime, Michelle Heslin brilliantly fielded a long delivery, turned sharply and fired the ball to the net.

That left Ballinamore 3-2 to 1-4 in front at the halftime interval but even with a player down, St Joseph’s were pushing the pace with Clare Owens firing over from 40 yards before a good passing move ended with Celine Shortt firing over the bar, cutting the gap to just two points.

Three minutes into the half, St Joseph’s pounced on a bad kickout and the ball was played into Bronagh O’Rourke who was taken down with a spot kick awarded. Carmel McGovern stepped up to take the kick but Michaela Harte stood firm, making a great save with the rebound driven wide.

Niamh Donohue put over a free eight minutes in but St Joseph’s cut the gap to just a point after 14 minutes when O’Rourke and Michelle Heslin both fired over good points from play, although both hit wides in that period.

Crucially, Ballinamore stemmed the tide of St Joseph’s comeback, Eilish and Ciara O’Dowd combining to get the ball out of the Ballinamore defence before setting up sister and team captain Laura for a crucial point on 17 minutes.

The water break seemed to slow down St Joseph’s but they again got the gap back to a point with seven minutes to go when they put together a great move, Carmel McGovern firing the ball over the bar.

Bronagh O’Rourke saw a shot spilled by keeper Michaela Harte but the Ballinamore defence cleared the danger. However, with the game ticking into added time, a good run from Aine Heslin released Celine Shortt to score the equalising point.

Ironically, Ballinamore had the best chances to sneak a winner, Kiera Masterson doing very well to punch a dangerous ball clear while Lily Beirne put a free wide as the game ended up all square.