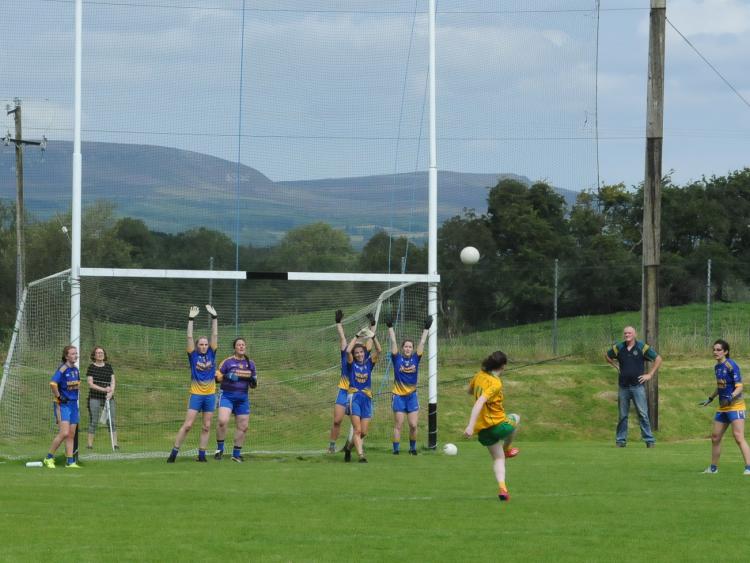 After a draw against champions St Joseph's last week, Ballinamore Sean O'Heslins showed they are definitely no flash in the pan when they came from behind to stun two time County finalists Glencar/Manorhamilton on Sunday in the Gotham Dry Wall Ladies SFC in Pairc Sheain Ui Eslin Ballinamore.

Trailing by six points with ten minutes to go, Ballinamore twice came from behind to tie the scores before Emma McGovern drove home a fourth goal for the home side to seal a famous victory amidst great celebrations from the home fans (see gallery).

In other SFC games this weekend, defending champions St Joseph's had far too much firepower for a St Brigid's side who have yet to pick up a point, the Aughavas Carrigallen women winning 5-17 to 1-2 while Kiltubrid proved too strong for St Francis on Friday evening, winning 1-15 to 1-7.

The results leaves St Joseph's and Ballinamore joint top of the table with five points, the defending champions in top spot thanks to a superior scoring difference with Glencar/Manorhamilton in third place on four points. Kiltubrid are ahead of St Francis, both on two points, thanks to the head to head meeting last Friday.

In Ballinamore, the first half was a real roller coaster with Glencar/Manorhamilton threatening to pull away only for Ballinamore to reel them in. Manor were three clear when Emma McGovern goaled in somewhat controversial fashion when referee TP McLoughlin appeared to blow the whistle for a delayed sideline ball just as it was kicked, allowing play to continue.

Glencar/Manorhamilton led 0-9 to 1-5 at the break, Muireann Devaney accounting for five of their scores. The second half was tit for tat again until Ailbhe Clancy took control of the game with three excellent points before Leah Fox's long range shot for a point dipped at just the right time to end up in the top left hand corner of the net.

That left the north Leitrim women six clear with ten minutes of normal time and seemingly well on their way to victory but Ballinamore's response was devastating, Emma McGovern and sub Emma Honeyman pouncing for a goal each in the space of 60 seconds to tie the scores again.

Points from Devaney and Clancy again edged Manor in front but a blazing shot from Clancy that went inches wide left the door open for Ballinamore who drew level with points from Roisin McHugh and Laura O'Dowd. McHugh and Devaney swapped frees as the game looked headed for a draw.

But in a dramatic finale, Ballinamore intercepted a Manor free and a driving Laura O'Dowd run saw her find an unmarked Emma McGovern in behind the Manor defence, the Ballinamore forward taking her time before smashing home her third goal of the day.

The icing was put on the cake when Roisin McHugh added another point to seal a famous 4-12 to 1-17 victory.