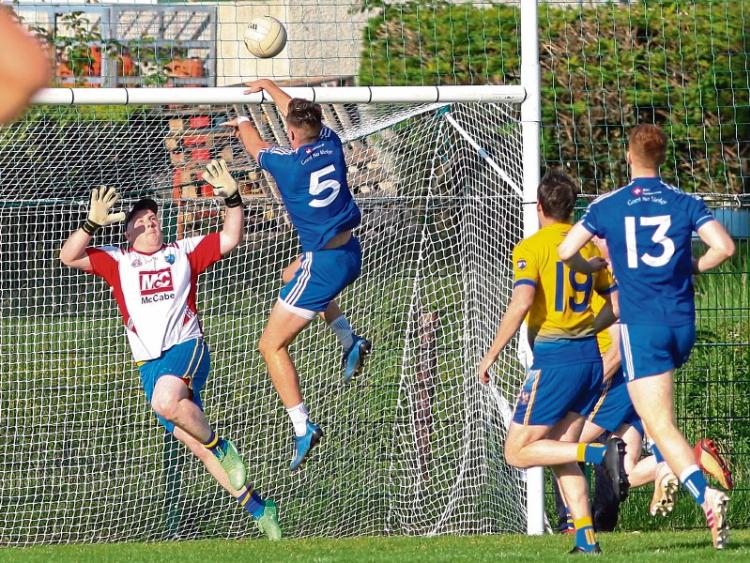 After a terrific start, Melvin Gaels certainly put one over on their arch North Leitrim rivals, Glencar/ Manorhamilton with a sparkling display in an action-packed Saturday’s Connacht Gold SFC clash in Melvin Park.

Melvin Gaels blasted Manor’s challenge out of the water in the opening four minutes when they rifled two goals past the defending champion’s goalkeeper, Colin Gilligan and also whipped over two points.

In this period, when the Gaels bored holes in a porous Glencar/Manor rearguard, both Cillian McGloin and Declan Clancy made excellent use of early ball in to clinically execute their killer strikes while Caolán Clancy whipped over two points.

Glencar/Manor found themselves eight points adrift before Conor Dolan got their opening score from a pointed fifth minute free. Emlyn Mulligan responded within the space of a minute with a pointed ‘45.’

Glencar/Manor did manage to get somewhat to grips with the Melvin Gaels onslaught in the remaining minutes of the first quarter when Conor Dolan converted two frees for fouls on Peter Poniard and Adrian Croal.

In this period Glencar/Manor’s Gerry Hickey and Melvin Gaels Declan Clancy saw yellow, as did Hickey’s teammate, Declan Byrne from another incident while Melvin Gaels Emlyn Mulligan was issued with a black card.

Over the next four minutes Declan Clancy fired over for Melvin Gaels while Conor Dolan (free) and Evan Sweeney answered with Manor points, Cathal McSharry seeing yellow in this spell.

In the closing minutes of the first half, Darragh Rooney hit three well-taken points with the last of the trio coming from a 22-metre side-line kick.

Glencar/Manor won a penalty before the break after Niall Brady was tumbled and Brady duly converted the spot kick after sending Gareth Phelan the wrong way, leaving Melvin Gaels 2-8 to 1-6 ahead at the break.

The Gaels went further ahead within five minutes of the restart thanks to Emlyn Mulligan, who pointed when punishing a foul on Caolán Clancy, and Darragh Rooney who fired home what probably was the best goal of the 2020 Leitrim championship.

Two minutes prior to Rooney’s spectacularly hit goal he was fouled for penalty, Mulligan taking the spot kick but Colin Gilligan made a good save and Mulligan put the rebound from Gilligan’s stop wide.

Melvin Gaels had a let off when Aaron Hickey drove a 36th minute goal chance wide. Adrian Croal pointed a minute later to open the second half account for Glencar/Manor.

Over the next six minutes, Colin Gilligan made a smart save from a goal-bound Darragh Rooney effort at the expense of a ’45,’ while sometime later Rooney hit over a 45-metre free.

The game’s final quarter was dominated by Glencar/Manor when they outplayed their opponents and outscored them by 0-6 to 0-1. Adrian Croal and Conor Dolan hit two apiece for Glencar/Manor in this spell with Evan Sweeney and Niall Brady getting a point apiece.