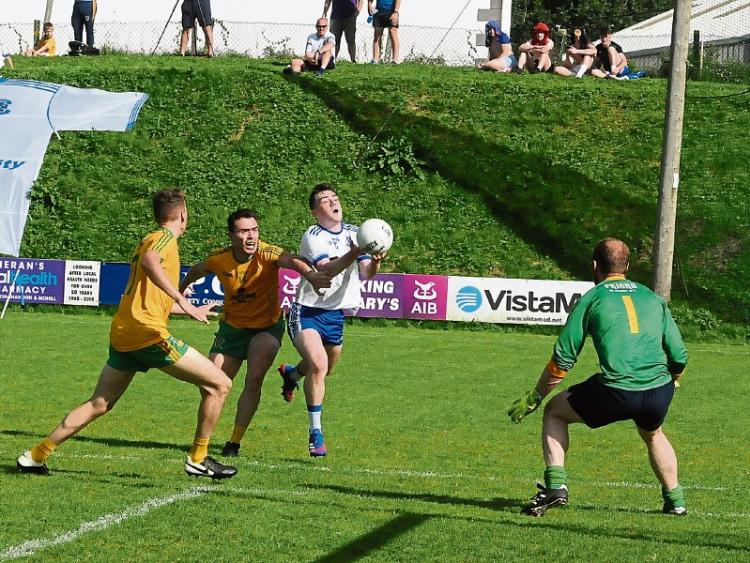 Like Lazarus from the grave, St Mary's rose from the dead for the second time in six days to hand Ballinamore Sean O'Heslins a shock defeat in the Connacht Gold SFC in Pairc Naomh Mhuire last Saturday.

Just as they had against Aughawillan the previous Monday, St Mary's looked dead and buried after Tom Prior scored a brilliant goal to put Ballinamore a point to the good nearly three minutes into injury time.

But a St Mary's team who looked like they were heading for the relegation playoff and seemingly in freefall have been transformed over the last two games and it has been shown in two outstanding performances and an unshakeable spirit that has seen them come from behind to snatch two vital wins.

Ballinamore's cause was not helped by the loss of Oisin McCaffrey after just 11 minutes and Shane Moran early in the second half but you would have to say it was a lethargic performance from an O'Heslins side who had impressed so much in their opening two games.

With Aughawillan's loss, a rejuvenated St Mary's booked their place in the quarter-finals and such is the momentum they are building that few want to be drawn against them.

Their mix of youth and experience, physical power and mobility makes them very dangerous and their growing confidence, allied with the excellent football they have played could see them as an outside bet for the championship.

Oisin Bohan (free) and Paul Keaney got St Mary’s off to a hot start with a point each in the first two minutes, a Wayne McKeon free on six minutes opening O'Heslins account. With both sides missing chances, Denis Dolan made an excellent diving save to deny Robbie Lowe a goal on nine minutes.

Ballinamore suffered a blow when Oisin McCaffrey was forced out of the game with an injured hand but McKeon levelled the scores from a free on 12 minutes. Alan Doherty responded with a brilliant point after he scooped up a loose ball after his teammates lost the ball.

Paul Keaney added to the lead, sidestepping his man to score from the corner before converting a free on 16 minutes. Robbie Lowe then got on the mark but not without a little controversy as he clearly called a mark before playing on to score.

St Mary’s were in rampant form, Oisin Bohan fisted the ball over the bar before Jonathan Cassidy drove upfield from defence to score a long range point and suddenly the home side were six points up.

Ballinamore’s reply was impressive, sub Andrew Burns’ neat sidestep leading to a fine point before McKeon tapped over another free. Barry McGovern got in on the act, his long range shot coming off the post to narrow the gap to three points.

Bohan and Mulvey added points before the break but a high arcing point from Shane Moran and another McKeon free left St Mary’s 0-10 to 0-7 ahead at halftime.

McKeon and Alan Doherty swapped early frees with Luke Murphy on target from a placed ball. St Mary’s should have had a goal when a great length of the field move ended with a flying Robbie Lowe fisted shot drifting too high and just over the bar.

Andrew Burns repeated his sidestep trick to add to his tally on eight minutes but there were misses at both ends, Tom Prior seeing a shot held by keeper Sean Reynolds while Doherty converted what looked a soft enough free on 42 minutes.

Ballinamore were forcing the pace: a McKeon free followed by a Tom Prior point. James McGrail landed a massive point after good work from sub Daire Farrell but two McKeon frees after the water break tied the scores with less than nine minutes left and St Mary’s were a man down after David O’Connell was black carded.

Oisin Bohan nudged St Mary’s back in front but a great Tom Prior effort tied the scores once more with less than two minutes to go. But St Mary’s looked as if they were going to take the victory when sub Joe O'Rourke put the home team in front.

But Ballinamore struck what looked a killer blow when Tom Prior somehow wiggled himself free and fired a truly brilliant shot low into the far left corner, sparking wild celebrations on the O’Heslins bench.

It wasn’t all good for O'Heslins as Dean McGovern was black carded for kicking the ball away as St Mary’s tried to take the kickout. St Mary’s charged forward, Conor Farrell was taken down and Oisin Bohan sent over the free more than four minutes into added time.