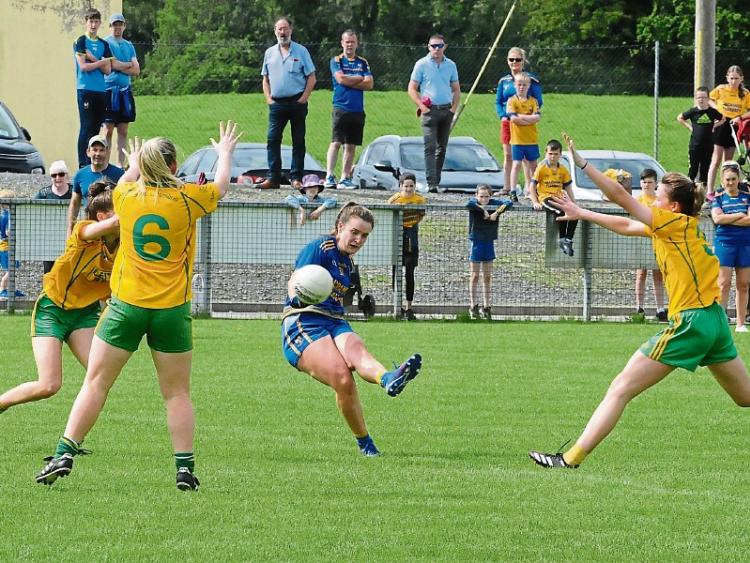 Any doubt that Ballinamore Sean O'Heslins are the real deal in this year's Gotham Dry Wall Ladies SFC vanished last Sunday when they rose from the dead to defeat Glencar/ Manorhamilton in a dramatic and high quality entertaining clash in Pairc Sheain Ui Eslin.

The bare facts of this game don't do it justice as Glencar Manor looked as if they would kill off a dogged Ballinamore challenge at least three times only to get hauled in each time before striking deep in injury time for a fourth and final killer goal.

With ten minutes of normal time left, Glencar/ Manor led by six points and finally looked home and hosed but two goals in the space of a minute drew the sides level again.

And it was Ballinamore who had the killer instinct in those final frantic minutes, Emma McGovern scoring a hat-trick to seal a famous win for the home side against a team many had down as favourites for the title this year.

Two Muireann Devaney frees got Glencar/Manor off to a good start but good points from Niamh Donohue and Emma McGovern tied the scores after nine minutes. Manor’s cause was not helped by the loss of county star Karen Connolly to injury after just six minutes with Rebecca Rooney coming on.

Glencar/Manor were setting the pace with points from Devaney (free) and Ailbhe Clancy with Niamh Donohue converting a free on 14 minutes. But the north Leitrim women were controlling the game and good points from Aoife Gilmartin and Dearbhla Rooney stretched the lead to three points.

Unfortunately for Manor, they also had three bad wides and it meant they were vulnerable to a goal and it came on 21 minutes but not without a small dash of controversy. Ballinamore had a sideline ball and just as it was kicked, referee TP McLoughlin blew his whistle to signal time wasting.

However with the ball in play, the Fenagh official allowed play to go and Laura O’Dowd charged forward before finding Emma McGovern who, despite two defenders trying to block her, fired to the net.

Devaney (free) and Clancy, a brilliant catch, turn and score, hit back with points as Ballinamore missed two chances of their own before Laura O’Dowd drove the ball over the bar. The half ended with Devaney and Laura O’Dowd swapping points as Glencar/Manor led 0-9 to 1-5 at the break.

Roisin McHugh put over two frees to one from Devaney in the first three minutes and it was tit for tat as McHugh and Clancy swapped scores. Devaney played a give-and-go with Dearbhla Rooney to score a good point midway through the half.

After the water break, two excellent Clancy points pushed Glencar/Manor three clear and they looked all set for victory when Leah Fox’s long range shot dipped under the bar for a dramatic goal with just over 12 minutes left.

But Ballinamore weren’t finished and two goals in the space of a minute almost immediately after Manor’s goal turned the game on its head. Niamh Donohue kept a long ball in play, found Laura O’Dowd and her floated pass left Emma McGovern with a simple palmed shot to the net.

Seconds later, Ballinamore had the ball in front of the Glencar/Manor goal and sub Emma Honeyman made no mistake from close range.

Manor had a goal chance but Ailbhe Clancy dragged her low powerful shot wide of the far post in the last minute of normal time. With the tension mounting, Laura O’Dowd pointed after a long solo run, Muireann Devaney converted a free as did Roisin McHugh four minutes into added time.

Then came the killer blow when a Manor free was intercepted over five minutes into added time, Laura O’Dowd ran in with the ball which found its way to an unmarked Emma McGovern in behind the Manor defence and after seemingly taking great care to pick her spot, McGovern secured her hattrick with a precise shot.

A stunned Glencar/Manor had no answer and Ballinamore made sure of the win with a fine point from Roisin McHugh, sparking off some wild celebrations.