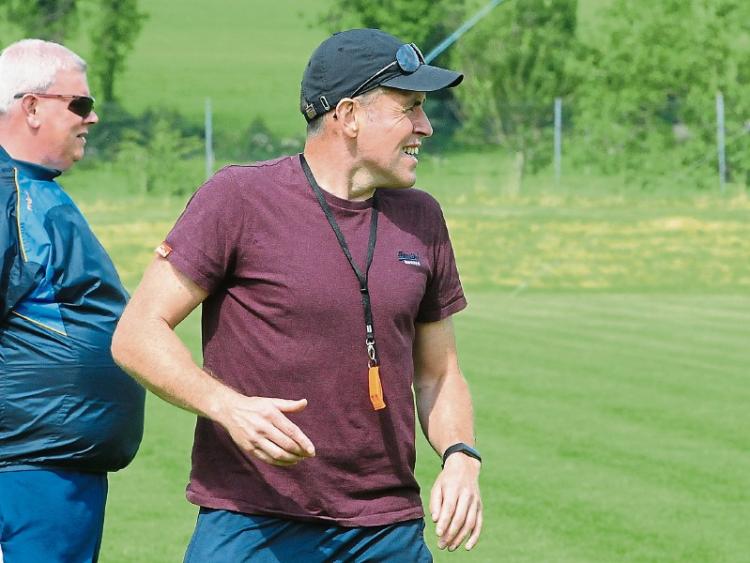 Beware a wounded lion! That was the message of Glencar/Manorhamilton manager Padhraic Corrigan as he promised his charges would bounce back from their four-point loss to Ballinamore Sean O’Heslins last Sunday.

A pretty intense discussion on the pitch between players and management was followed by Glencar/Manor’s players holding a players only meeting, something Padhraic believes will benefit the two time county finalists before the Gotham Dry Wall Ladies SFC is over.

“Heads down but look we have a great bunch of girls,” Padhraic told the Observer, “they’re hurting over there but as I said, they’ll drive it and I wouldn’t expect anything else. Watch us over the next few games and the knockout, those girls they don’t accept defeats like that.

The Manor boss was disappointed with the failure to see out the game after establishing a six point lead ten minutes from time: “We’re very disappointed from that point of view. We were six points up, we should be closing games out at that.

“Goals win games and they were sloppy goals, it was game management that let us down there today. We’re thankful that we’re getting other opportunities to work on that and never make those mistakes again.”

Padhraic did pay tribute to Ballinamore: “Fair play to Ballinamore, they’ve gone on their own this year, they obviously feel, and they’ve proven it today, that they have a team worthy to compete. Fair play to them, they didn’t give up, six points down and they kept coming back so that shows great character.”

As for the rest of the championship, Padhraic sees defending champions St Joseph’s as the team to watch: “St Joseph’s are the kingmakers at the minute because they are good at seeing out games, we only aspire to where they are at.

“We’re disappointed but that’s the beauty of this round robin, we get to look at everyone and we have two more games. You’re going to play the top teams again to win this championship and we know what we’re going to come up against, it is always backs and defensive, defensive stuff so we’re just going to have to deal with it.

“Nobody is going to do it for us, nobody hands out championships.”