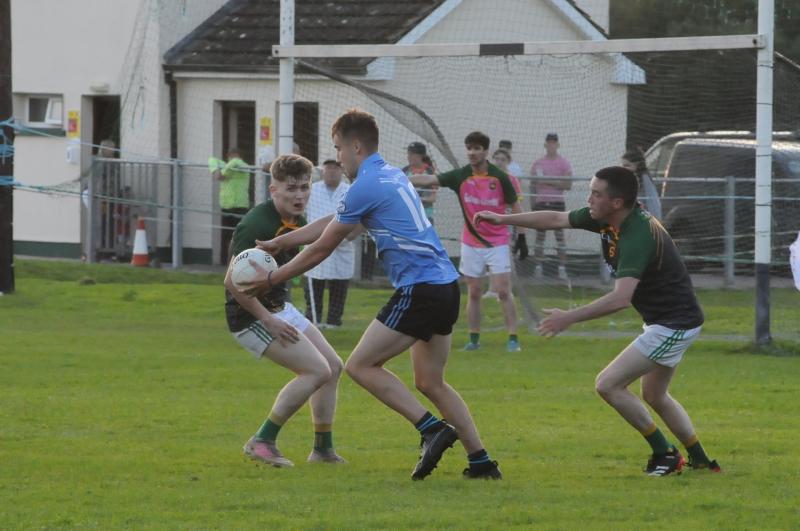 In the only game with real do or die implications, Allen Gaels were the big winners as they overcame Drumreilly in the Connacht Gold SFC championship to book their place in the competition's quarter-finals.

Allen Gaels 2-14 to 0-11 over a Drumreilly team who finished up with only 12 men on the field after three second half dismissals means they will face Mohill in the quarter-finals with Drumreilly going up against neighbours Aughawillan in the relegation final, both games scheduled for August 29/30.

Clubs now know the pairings for the quarter-finals with Melvin Gaels taking on St Mary's Kiltoghert while Fenagh St Caillin's set up a repeat of the 2017 Intermediate Final when they set up a meeting with Leitrim Gaels. But the big game is the repeat of last year's County Final with champions Glencar/Manorhamilton taking on Ballinamore Sean O'Heslins in a mouth-watering clash.

Back to Saturday's action and the big game took place in Carrickmakeegan where the winner of the meeting of Drumreilly and Allen Gaels would go into the quarter-finals. Drumreilly surged into an early three point lead but by the time of the first water break, the sides were level at 0-4 apiece.

The game remained tit for tat for long periods but just on the stroke of halftime, Thomas Mulvey drove home a goal chance for Allen Gaels after good work from James Flynn, leaving the Drumshanbo men with a 1-8 to 0-8 halftime lead. Drumreilly needed a good start to the second half but it was the Drumshanbo men who got it when Mulvey found the net for a second time after a smart one-two with Flynn.

Sub Olly Maguire made a great block to deny the Gaels a third goal but the Drumshanbo men started to move away slowly but surely. A red card for Damian Mitchell after a outbreak of scuffles seven minutes from time saw Drumreilly reduced to 14 and they also lost Graham Taylor to a second yellow and Dermot Holohan to a straight red before the final whistle.

Champions Glencar/Manorhamilton had a hard fought 2-10 to 1-10 victory over a Leitrim Gaels who actually took the lead near the finish. The teams were deadlocked early on at four points apiece at the break before the Gaels opened up a two point gap early in the second half.

However, a goal from Declan Byrne put the defending champions back in front and they stretched their lead to three points. But Leitrim Gaels weren't finished and a goal from Ryan Goldrick after 54 minutes tied the scores. Conor Dolan and David Regan swapped points before Aidan Flynn edged the Gaels in front after 58 minutes.

But Glencar/Manor's response was deadly as Aaron Hickey found the net and from there to the finish, the home side maintained their advantage to finish in second place in the table, with Leitrim Gaels third.

In Ballinamore, a dramatic derby finished level at 1-15 to 2-12 after Oisin McLoughlin's injury time free ensured a draw for Fenagh. Ballinamore settled quickest with four points but a great finish from Riordan O'Rourke led to an equalising goal for Fenagh. The game was tit for tat until halftime as Ballinamore held a narrow 0-9 to 1-5 lead at the break.

Two quick points from Tom Prior opened up a gap but a seventh minute penalty from Ryan O'Rourke put the visitors a point to the good. Ballinamore, to their credit, fought back when Dean McGovern somehow managed to get the ball out of a scrum to Mark McGrory and his close range shot found the net.

That put Ballinamore two clear but Fenagh came back with Oisin McLoughlin converting a free deep into injury time to ensure a draw. That draw meant Fenagh took second place in the group thanks to a superior scoring difference and pitted them against Leitrim Gaels and Ballinamore against Glencar/Manorhamilton.

The final game of the weekend saw Mohill cruise to an easy 5-18 to to 0-6 victory over an Aughawillan side that may have their attention firmly on the relegation final. The sides were level at the first water break, 0-4, apiece but Mohill added 1-5 to their tally before the halftime interval, leading 1-10 to 0-5.

The second half saw Mohill add four more goals to their tally as they head into their quarter-final against Allen Gaels in quite good form.

The full complete draw for the quarter-finals is as follows: