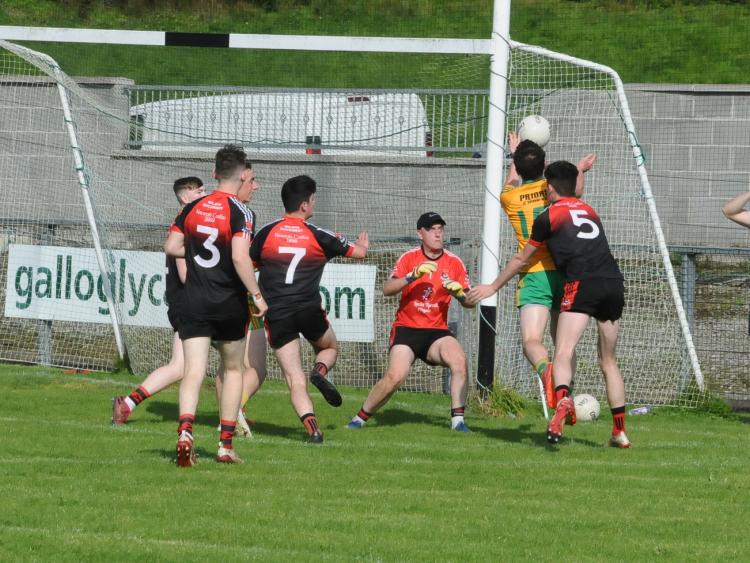 Tom Prior fists the ball over the Fenagh bar Picture: Willie Donnellan

Fenagh St Caillin's are the real deal and Ballinamore Sean O'Heslins are vulnerable when not at full strength are probably the main talking points from an intriguing Connacht Gold SFC clash last Saturday.

That the contest in Pairc Sheain Ui Eslin ended in a draw will keep both sides reasonably happy as they set sights on the quarter-finals where Ballinamore have a rematch of last year's County Final and Fenagh take on old rivals Leitrim Gaels.

Given that they recovered from a three point gap near the end, Fenagh will probably be a shade happier, particularly given their historically bad record against their neighbours. They weren't at full-strength either so they will take a lot from how they battled back to force this draw.

Without Shane Moran, Luke Murphy & Oisin McCaffrey, Ballinamore will be pleased they came through without any further major injuries but they may be a little worried that this was the second game in a row they were unable to close out from a winning position, giving them some pause for thought going forward.

Ballinamore threatened early to build up a big lead as Tom Prior was twice on the mark in the first two minutes while Niall McGovern scored from distance with only a Ryan O’Rourke free in response.

But the game was truly ignited after just five minutes when Fenagh overturned the ball and with Ballinamore out of position, a quick ball into Riordan O’Rourke saw him finish expertly to the net to push the visitors in front.

Wayne McKeon took off on a run down the right wing to fire over a good point and added a free after a Conor Dwyer yellow for a foul on Paddy Connaughton. Ryan O’Rourke made a spectacular mark and fired over on 12 minutes to tie the scores.

Niall McGovern showed some nimble footwork to release Connaughton who fisted the ball over the bar from close range, although it could have been more with an unmarked Tom Prior in acres of space on the far post.

With Fenagh missing good chances and losing Oisin McLoughlin after he was dazed following an accidental clash, Ballinamore started to pull ahead with a Cathal McHugh free and a McKeon free extended the gap with a Fergal McLoughlin score in response.

Ryan O’Rourke had a shot blocked but his cousin Riordan pounced on the rebound to hook his shot high over the Ballinamore bar and a fast paced first half ended with Wayne McKeon and Ryan O’Rourke swapping frees to leave the halftime score at 0-9 to 1-5 in favour of Ballinamore.

Tom Prior repeated his trick of the first half by scoring the first two points of the second half, one after robbing a defender, the second after a high ball broke for him, both showing his range of skills.

But a dogged Fenagh would not let this game away from them - Ryan O’Rourke put over a free and Donal Wrynn launched a 45 yard effort over the bar to cut the gap back to a point but Mark McGrory scored a fine point on five minutes.

A goal would change the complexion of this game and when Ryan O’Rourke was clearly pulled down by Brian Banks, the Ballinamore man very lucky to avoid further censure from referee Ray McBrien, Ryan dusted himself off to put Fenagh a point to the good after 37 minutes.

Ballinamore’s response was impressive - after Conor McHugh (free) and Ryan O’Rourke swapped points, Dean McGovern won a high ball and somehow smuggled it through to Mark McGrory, one of three Ballinamore players unmarked in front of the goal and the wing forward made no mistake with a clinical finish on 43 minutes.

With the water break intervening, the scoring slowed but an Andrew Burns point put O’Heslins three clear with just over ten minutes to play.

Again, back came Fenagh with Ryan O’Rourke’s lovely point followed by an even longer 55 yard Wrynn free that left a point in it again. Wayne McKeon taped over a free with just over six minutes of normal time left but Ballinamore would go on to hit four bad wides.

That left the door open and Oisin McLoughlin, back on the field after his earlier knock, tapped over a free after a foul on Ryan O’Rourke that should have been accompanied by a black card or yellow at the least.

That left a point in it but, over three minutes into added time, Fenagh got the score they needed - a booming Donal Wrynn delivery was hauled in brilliantly by Riordan O’Rourke who was hauled to the ground on the edge of the square, Oisin McLoughlin tapping over the free to ensure a draw.