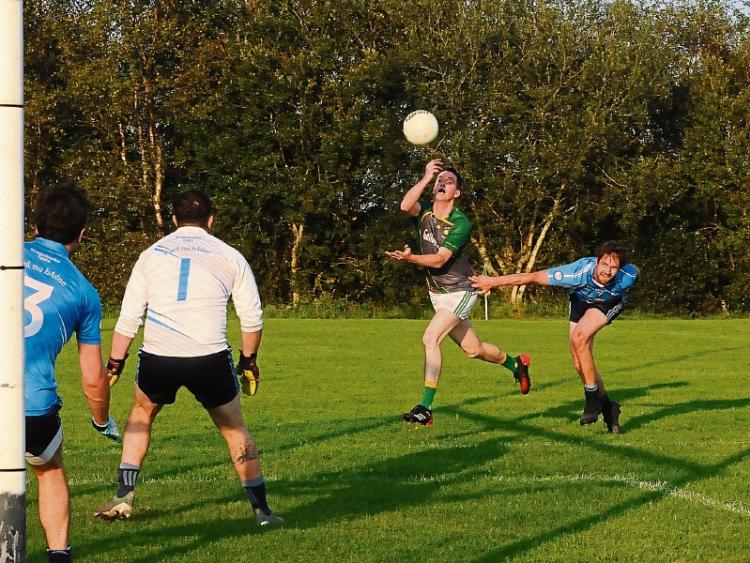 Two goals from Thomas Mulvey and the leadership of James Flynn saw a focussed Allen Gaels comfortably see off the challenge of a Drumreilly side who ended this Connacht Gold SFC game with just 12 players on the field.

On a beautiful evening for football, Drumreilly gave their all in pursuit of reaching the quarter-finals but they were unable to match the clinical efficiency of the Drumshanbo men who, even while the game was nip and tuck, never looked like they were going to lose this one.

The long term damage to Drumreilly's hopes of staying in the senior grade may be irreparable as suspensions and injuries will leave them severely understrength for the relegation final against neighbours Aughawillan.

But for Allen Gaels, that will matter little as they secured their championship status and a quarter-final clash with Mohill - the Drumshanbo men have been somewhat unlucky so far in the championship but they showed enough here to suggest that there is lots of potential in this side.

Truth be told, they always looked that little bit slicker, that little bit faster than Drumreilly on Saturday, only the renowned battling spirit of the home side keeping them in contention at halftime.

But a second Thomas Mulvey goal after halftime effectively killed off this game and allowed the Gaels to relax as Drumreilly, short of bodies and growing short of players as three players were sent to the line in the straight 12 minutes of action.

There were plenty of good displays from Allen Gaels, Caleb Duffy, Thomas Mulvey, Jason Loftus & Colin Moran in particular catching the eye but there was no escaping the fact that James Flynn set the tone for this team. It wasn't just his six points, it was the way he went about it, always available, always running and always willing to give the pass and make the unselfish run.

The Gaels will go into the quarter-finals as underdogs but if they replicate this workrate & intensity, Mohill will not get it easy. There is an intensity and edge to the Gaels that make them difficult opponents and a bit of pace and variety that will cause problems.

Drumreilly opened the scoring with a Conor Gaffney point, although the score was disputed by the Allen Gaels defence, before the same player finished off a great move involving James Holohan and Raymond Fee to fire over a good point.

Martin Beirne charged through the middle to score under pressure after less than five minutes but a Fee free on eight minutes restored the gap. The tit for tat continued as Thomas Mulvey and Fee, form a free, swapped points as Drumreilly stayed two clear.

However, Allen Gaels were starting to dominate and Caleb Duffy fired over quickly followed by a well worked James Flynn point just before the water break. The break didn’t halt the Drumshanbo side’s momentum as Shane Walsh pointed after good work from Ciaran Walsh.

Two James Flynn scores, both from play but the second after he drew on a loose ball, saw the Gaels stretch the lead to three points but Drumreilly fought back with a Conor Gaffney free following a foul on John McKeon.

Drumreilly seemed well in the game but Allen Gaels killed off the contest just before the break when Caleb Duffy scored a fine point from 40 yards and then James Flynn set up Thomas Mulvey for a close range goal.

If there was any doubt about the game, it ended in the five minutes after the break with James Flynn firing over a free before he played a good one-two with Thomas Mulvey, the wing-forward driving home his second goal.

Drumreilly responded with a John McKeon point but the game entered a period of stalemate with no scores for the next 14 minutes although Allen Gaels went close as a brilliant move ended with Ciaran Walsh see his shot brilliantly blocked by a full-length diving save from sub Olly Maguire, barely seconds on the field.

The drought ended when James Flynn pointed after 50 minutes but the game became very messy with a scuffle breaking out. After a prolonged bout of pushing, shoving & general narkiness, Drumreilly’s Damien Maguire was shown a straight red card while there were yellows for keeper Damon Maguire and Allen Gaels’ Brian Mulvey.

Ciaran and Shane Walsh both fired over good points while another off the ball clash led to a yellow card for Ciaran Walsh and a red card for Drumreilly’s Graham Taylor. Caleb Duffy swapped points with Nigel Maguire before Allen Gaels sub Cian Beirne missed a good chance for a third Gaels goal.

Shane Walsh fisted the ball over the bar after a strong run with the scoring completed by a Conor Gaffney. Unfortunately for Drumreilly, the game ended on a further sour note with Dermot Holohan receiving a straight red card for a very late tackle.