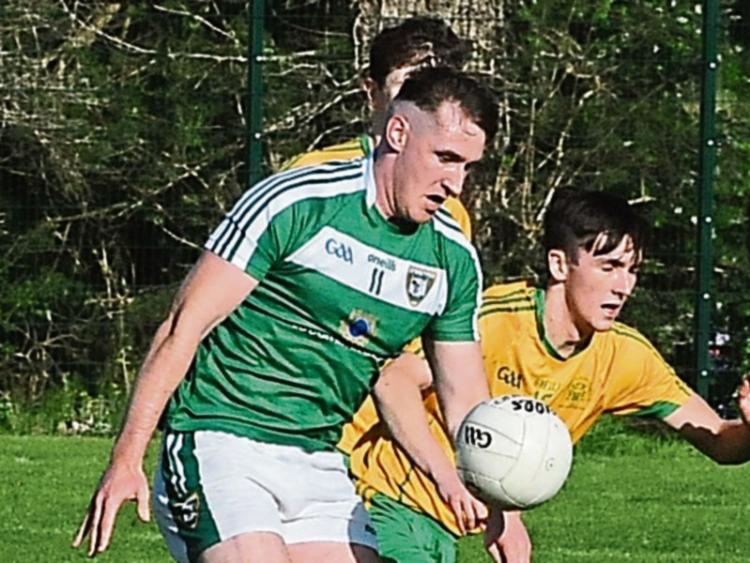 Mohill were favourites going to Aughawillan for their final Connacht Gold Senior Championship group game in Aughawillan last Sunday and their strength, speed & accuracy showed why.

Aughawillan started the stronger of the two teams and gained a three-point lead in the opening few minutes, scores from Gary Plunkett, Ciaran Gilheany and a Morgan Quinn free giving the home team the advantage.

It didn’t take long for the visitors to kick it up a gear, points from Eanna Madden, Keith Beirne & Domhnaill Flynn getting Mohill into the game. Aughawillan soon lost two of their starting defenders to injury with Christy Prior replacing Noel Plunkett and Fionnbarr Quinn replacing Daire Maxwell.

Mark Plunkett levelled the game and Pearce Dolan put Aughawillan into the lead shortly after the water break. Pearce Dolan controlled mid-field for large parts of the game with some great fielding in the middle of the pitch, especially from kickouts.

Both keepers were on form and were called upon to make numerous saves as each team had many opportunities to go for goal in the opening 20 minutes.

Aughawillan hearts were broken when Keith Beirne again passed to Alan McLoughlin in front of goal, but this time McLoughlin made no mistake and placed the ball in the back of the Aughawillan net, giving Mohill a 1-10 to 0-5 lead at half time.

Mohill made easy work of the second half with goals from Keith Beirne and Ronan Kennedy, who came on at half time for Jordan Reynolds, within five minutes of the restart putting the game beyond Aughawillan’s reach.

The home team had plenty of scoring opportunities in the second half, but failed to take them – Aughawillan’s only point in the second half coming from Christy Prior. Another goal each from Beirne and Kennedy secured the win for Mohill, who won with a final score of 5-16 to 0-6.

Mohill’s speed & strength going forward coupled with the experience of players coming on the bench was the difference between the two teams. Aughawillan will be disappointed with their performance & how Mohill were able to take control of the game to finish top of Group 1.

Aughawillan will now face close neighbours Drumreilly in the Relegation Final, while Mohill will play Allen Gaels in the Quarter-Final.