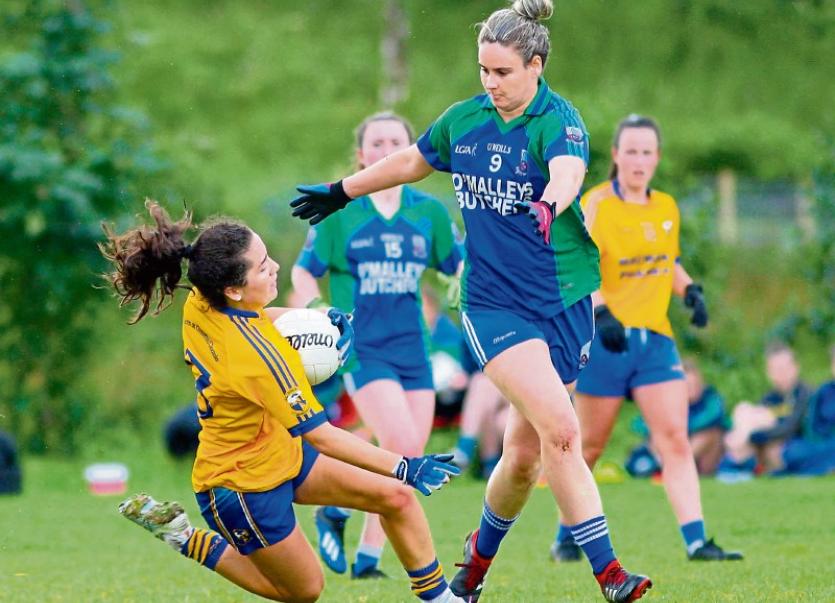 After a flying start that saw them build up an eight point advantage, Glencar/ Manorhamilton had to dig deep in the closing stages of Sunday’s evenly matched Gotham Dry Wall Ladies SFC clash a damp Boggaun, to force a draw with defending champions St. Joseph’s.

In what was a rematch of last year’s county final between these sides, Glencar Manor stormed ahead in the opening 13 minutes after which they led by 1-5 to no score, the defending champions struggling to match the team they beat in the last two Finals.

But five unanswered points from the Aughavas/ Carrigallen outfit showed just why St Joseph’s have won the title three years in a row and they surged into a two point lead with seven minutes left, forcing the home team to work hard to snatch a draw.

This draw means that Ballinamore Sean O’Heslins top the group stages and will play Kiltubrid in the semi-finals while St Joseph’s and Glencar/Manor will meet again in the other semi-final.

St. Joseph’s struggled to match Glencar/Manor in the opening period as the home team opened their account within 40 seconds of the throw-in when Muireann Devaney drove to the St. Joseph’s net after her initial goal bound shot rebounded off the crossbar and upright.

Over the next 12 minutes, Glencar/Manor camped in the St. Joseph’s half of the field with Ailbhe Clancy and Dearbhla Rooney adding a point apiece by the fourth minute.

Clancy would add another from play before Devaney converted a free after Aoife Gilmartin was fouled. Devaney again found the target from play on the 13-minute mark for the home side to put Glencar/Manor eight points.

Just before the arrival of the first water-break, St. Joseph’s managed to open their account with Bronagh O’Rourke putting over a free following what had been her side’s first meaningful incursion into Manor territory.

If Manor bossed the first quarter, St Joseph’s did the same in the second and played themselves right back into contention. Michelle Heslin reduced Manor’s lead when she fired over a 23rd minute point.

Over the next four minutes Carmel McGovern, Michelle Heslin and Bronagh O’Rourke (free) whipped over a point each that reduced the deficit to three points but as halftime approached, Glencar/Manor keeper, Eimear O’Connor was forced to pull off a timely save to deny a goal bound Bronagh O’Rourke effort at the expense of a ’45.’

At the other end, Dearbhla Rooney drove a goal chance inches wide to afford a let off for St. Joseph’s as Glencar/Manor enjoyed a 1-5 to 0-5 lead at halftime.

After the restart, Rachel McIntyre narrowed when she fired over a 32nd minute point but a minute later, St. Joseph’s goalkeeper, Keira Masterson made a good save when she stopped an Ailbhe Clancy shot that looked like it was heading for the net.

When Muireann Devaney put over a 34th minute free, she restored the three point halftime advantage but over the next nine minutes, St Joseph’s held Glencar/Manor scoreless while adding 1-2 to their tally.

Bronagh O’Rourke put over a free after Carmel McGovern was fouled and then fired over from play and the County star put St. Joseph’s on top when she fired soccer style to the Glencar/Manor on the 43-minute mark.

Shortly after St. Joseph’s were reduced to 14 players when Louise Maguire was sin binned for ten minutes. A 47th minute Devaney free cut St. Joseph’s lead to the minimum.

But St. Joseph’s stretched their lead to two points some seven minutes later when Bronagh O’Rourke tapped over a free that was awarded for a foul on Michelle Heslin.

Glencar/Manor lifted their game in the final six minutes of the action and forced a draw thanks to Ailbhe Clancy who whipped over a point and then just before the final whistle, Muireann Devaney got the leveller.