No sure bets in intriguing Gotham Leitrim Ladies SFC semi-finals 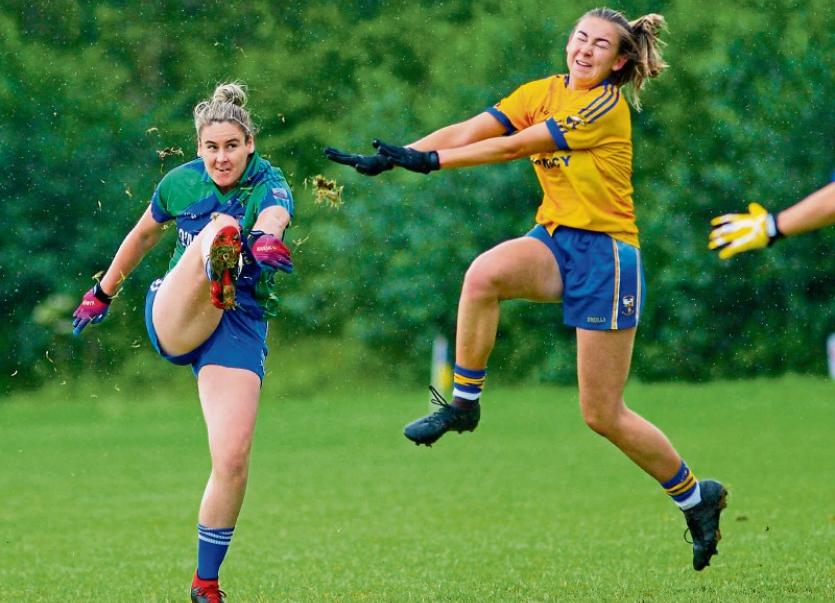 Grass, rain and player flying as an airborne Glencar/Manor tries to block the shot of St Joseph's Aine Heslin in the group stages Picture: James Molloy

Expediency might have seen Leitrim LGFA adopt a new format for this year's Senior Championship but there is no doubt that the round robin system has brought us one of the best and most intriguing Ladies championship in years.

Like brash upstarts taking on the big kids, Ballinamore Sean O'Heslins have grown in confidence and form so much so that they head into next Sunday's Semi-Final clash with two time Connacht Senior Club finalists Kiltubrid as the hottest favourite of the weekend.

Ballinamore's emergence means that we will not have a third meeting between champions St Joseph's & Glencar/ Manorhamilton in the final this year this year as one of the two big guns of recent years will exit at the semi-final stage come hell or high water.

With the quality on show so far in this campaign, next weekend's semi-finals have a lot to live up to but you get the feeling that they will and more. We take a brief look at the two games:

A couple of years ago, this would have been regarded as lambs to the slaughter such was Kiltubrid's standing in the game but next Sunday in Leitrim Village (3.30 throw -in), it is the former Connacht Club finalists who will start as underdogs against a potent Ballinamore outfit.

What makes Ballinamore's rapid ascent all the more remarkable is that it has been done without Sarah McLoughlin & Mary McNulty, two absolute legends for the club over the years but it is a mark of how far O'Heslin's have developed that, at least up to this point, they haven't been missed.

Anyone trying to stop Ballinamore have to stop the O'Dowd sisters and Laura in particular. Eilish & Ciara are hugely effective ball winners and carriers and give O'Heslins real power in the middle of the park but Laura's searing pace gives them a weapon that leads to scores for Roisin McHugh & Emma McGovern.

Kiltubrid would love to have Aine Tighe back in action but it is unlikely we will see her playing meaning they will be relying on Michelle Guckian for scores. That makes Ballinamore's task in defence a slight bit easier for Guckian is a real handful and if she hits form, the Kiltubrid player can really score from anywhere.

Ballinamore had a pretty comprehensive 4-16 to 1-6 win over Kiltubrid in the group stages and it hard to see where Kiltubrid can make up that gap. It would take a very bad day for Ballinamore for that to happen so I'd expect them to reach their first ever Senior Championship Final.

Wow - nearly everyone would have expected these two to finish one and two in the group but the emergence of Ballinamore has scuppered that and one of the giants of Leitrim ladies football will bite the dust next Sunday in Drumshanbo (1pm throw-in time).

Using Ballinamore as a common thread, St Joseph's would appear to have the edge as they drew with their neighbours while Manor lost out but that would be misleading - as an enthralled spectator at both games, they were so very different that it is difficult to know what to read into them.

Against the Aughavas & Carrigallen combination, Ballinamore started like trains and left St Joseph's reeling with a barrage of first half goals. From there, it was hold on for dear life as the champions pounded them and pounded them, so much it was Ballinamore who were probably happier to come away with the draw.

Glencar/Manor put huge pressure on Ballinamore for long, long periods and built up big leads a couple of times. But the draw against Joseph's had given the home team a huge injection of confidence and timely goals and big contributions off the bench made the difference as Manor fell to a devastating late Ballinamore surge.

Their own game in Boggaun less than two weeks ago offers little to make a definitive verdict on. Again Glencar/Manor started like a proverbial train and led by eight points early on yet it was the home team who needed two late points to beat the resilient, tough warriors from St Joseph's.

Eerily similar, both teams have triple threats in front of goal - Michelle Heslin, Carmel McGovern & Bronagh O'Rourke are supplemented by Aine Heslin & Rachel McIntyre while Ailbhe Clancy, Muireann Devaney and Leah Fox are backed up with scores from Dearbhla Rooney and Aoife Gilmartin.

You get the feeling that both these teams will be paying attention to their defence after Ballinamore hit them for three and four goals and it showed in their group stages meeting. The performances of Vanessa Gallogly, Shannen O'Rourke, Mairead Clancy, Hannah Johnston to name a few will be very important here.

The fact that both these teams know each other so well, have contested so many big games and have a spiky enough relationship on the field adds to the intrigue and I really am torn in trying to predict a winner.

Glencar/Manor's sheer pace and scoring power really impressed me when I saw them and you think if they hit form, nobody could hold them but St Joseph's are such warriors who refuse to back down. I think it will be tight and tough and St Joseph's will find a way to win as they usually do.

We're down at the semi-final stages of the McGovern London Ladies Intermediate Championship but to be honest, you get the feeling that only two teams really have a chance of lifting silverware this year.

That's not being derogatory to either Keeldra Gaels or St Mary's Kiltoghert, far from it as both have battled hard to get to this stage, but the truth is that both Dromahair and Mohill look to be in a different league to the rest of the competition.

That would appear to give Keeldra Gaels the better chance of pulling off a shock but Dromahair seem to be building up a nice head of steam under returned manager Gerry Ballantyne and they easily accounted for Mohill 1-8 to 0-3 to top the group.

Both Keeldra and St Mary's are emerging teams with lots of young talent, each having won the Junior title in recent years but at this stage of their development, you have to go for the mix of experience and youth that Mohill and Dromahair possess to reach the intermediate final.