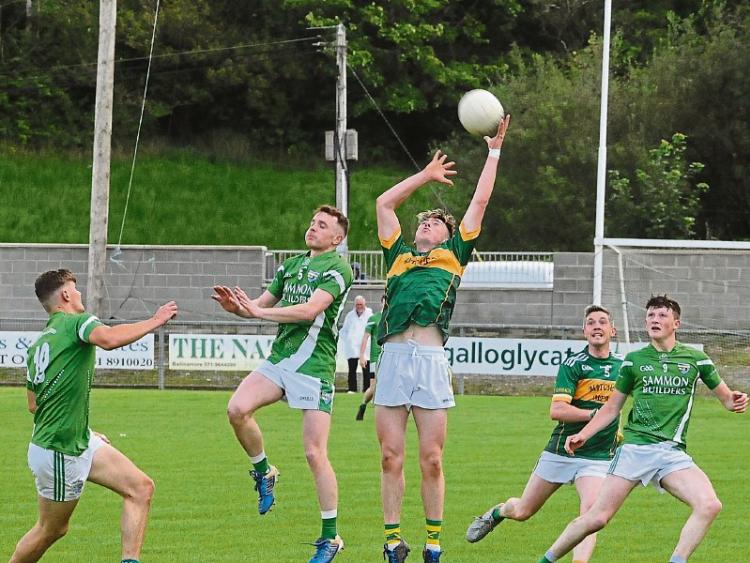 A great bit of fielding from a Gortletteragh player in Ballinamore Picture: Willie Donnellan

Gortletteragh was always on top in this clash, which they won comfortably by 18 points and they forced Aughnasheelin to play second fiddle in most of the exchanges.

The Gortletteragh men probably could have done with a much sterner test than Aughnasheelin provided them for their forthcoming Leitrim intermediate championship semi-final showdown.

The only slight chink that appeared in Gortletteragh’s armour on Saturday occurred for a short period after the second water break when Aughnasheelin found their opponent’s net twice in the space of a minute.

For this truly short period Gortletteragh seemed somewhat vulnerable but they still re-grouped afterwards to close out the game in a commanding manner.

Despite Aughnasheelin best battling efforts on the day, Gortletteragh more or less always overpowered them. Aughnasheelin only slightly troubled Gortletteragh for an eleven-minute period early in the first half and for a truly short final quarter spell.

Meantime Gortletteragh got off to an ideal start in the opening three minutes when Colm Duffy whipped over a point and James Quinn hammed home a goal soccer style after Mark Heslin hit in a low ball into the Aughnasheelin goalmouth.

Aughnasheelin settled down well over the next five minutes and Gavin Sammon whipped over two points for them. After their good start it took Gortletteragh another eleven minutes to get their next score with James Quinn firing over a point.

Shortly afterwards Aughnasheelin goalkeeper, Martin McHugh pulled off a timely save to deny a goal bound Conor Reynolds effort at the expense of a ‘45.’ Oisin Niblock increased Gortletteragh’s lead when hit shot over before the first water break.

Post the water break Gortletteragh pulled well ahead with Mark Heslin adding points from play and a free while Niall Woods also fired to the Aughnasheelin net.

Aughnasheelin stayed in touch when Gavin Salmon shot his third point and Fintan Fitzpatrick put over a free on the 27-minute mark but they also had a let off in this period when Jack Heslin drove a goal chance wide.

Gortletteragh finished the half strongly with Francie Flynn getting a goal and a point while Mark Heslin also tapped over a free to put them ahead at the break by 3-7 to 0-4.

Ciaran Cullen hit over an Aughnasheelin point within a minute of the restart. Francie Flynn replied with a similar Gortletteragh score from a placed two minutes later.

An almost certain Gortletteragh goal chance was denied on the 37-minute mark when Ciaran Cullen blocked a Francie Flynn effort out for a ’45.’ Shortly afterwards Aughnasheelin’s Christy McNulty received a yellow card.

Gortletteragh continued to decisively outplay Aughnasheelin and put the game well out of the reach for their opponents in the next phase of the third quarter. In this spell Gortletteragh added an unanswered 2-3 to go into a 21 point lead.

During this period, Jack Heslin hit 1-2 for Gortletteragh, while Conor Reynolds chipped in with a goal and John Reynolds with a point. Meantime in the early stages of the final quarter, Aughnasheelin had their best spell in the game when they hit 2-1 without reply.

After sub Michael Domican and Conor Sammon hit a goal apiece for Aughnasheelin and Fintan Fitzpatrick tapped over a free, Gortletteragh still led comfortably by 14 points.