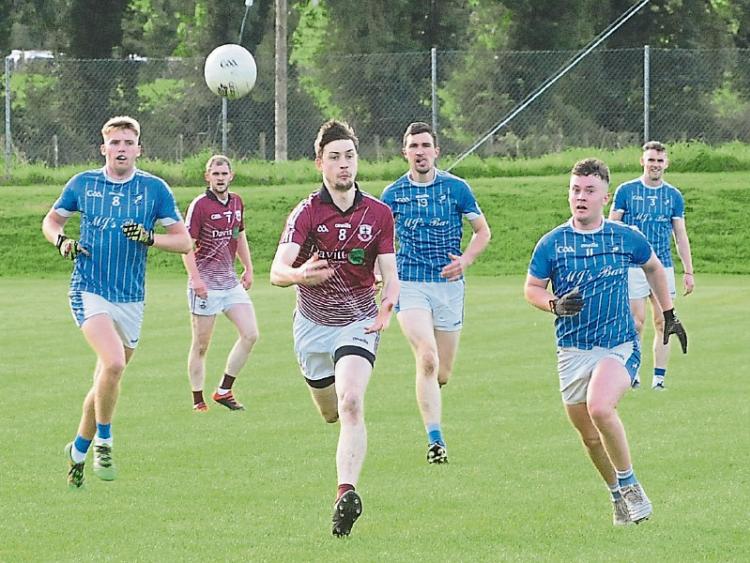 Excitement was at a premium in Ballinamore in closing stages of Saturday’s knife edged Smith Monumentals IFC quarter-final, especially when Carrigallen’s Marc Dolan whipped over the winner from a late free to send a brave Drumkeerin home empty handed.

Prior to that it had been a nip and tuck affair as both sides battled might and main to get their noses in front. Drumkeerin got out of the blocks incredibly early when raising the game’s first white flag with the lively Jamie Langan whipping over a point just 20 seconds after the throw-in.

But it took another twelve minutes for the contest’s next score to arrive when Eoin Ward levelled for Carrigallen. Defences at both ends were very much on top at this stage. However, Jamie Langan put Drumkeerin back in front when he whipped over a free just before the game’s first water break.

But it was even Stephen after Carrigallen’s Marc Dolan punished a Drumkeerin foul by converting the resulting 20th minute free. Four minutes later Jamie Langan whipped over a beauty of a point from 35 metres out on the left wing, to put Drumkeerin ahead once more.

The game was back in a stalemate situation two minutes later when Carrigallen’s Liam O’Rourke evaded his Drumkeerin marker to whip over a levelling score. Drumkeerin’s Jason Byrne received a 27th minute yellow card.

A minute later Carrigallen took the lead for the first time when Liam O’Rourke shot over for a second time. When Drumkeerin’s Jerome Maguire hit over a 29th minute point, he levelled the proceedings for a fourth time in this nail-biting contest.

In response Carrigallen staged a late first half surge that edged them into a two point interval advantage. In this period the Carrigallen successfully men ran at the Drumkeerin defence and forced them to concede two fouls in particular that yielded two good scores.

Carrigallen’s Marc Dolan made no mistakes from the placed balls, to put his side into a 0-6 to 0-4 interval lead. Meantime Drumkeerin made a bright start to the second half and were back on level terms within six minutes of the resumption.

Cathal McCauley punished two Carrigallen fouls in this period when he hit over two Drumkeerin frees, the first of which was awarded after Jerome Maguire was illegally checked in possession on his run towards his opponent’s posts. Drumkeerin went down to 14 players on 39 minutes after Jason Byrne received his second yellow.

Shortly afterwards Carrigallen sub Gerry McDermott was the recipient of a yellow card. Drumkeerin took the lead for the last time in the game just after the last water break restart when Jamie Langan shot over.

But Carrigallen hit back with a goal two minutes later after sub Ciaran Flynn put a ball across the Drumkeerin goalmouth from almost on the right end-line and Eoin Ward was on hand to flick the ball home.

However, there was a blow for Carrigallen when, following this score, they went down to 14 players when Ciaran Flynn was issued with a straight red card.

Drumkeerin lifted their game again and levelled matters by the 60-minute mark after Jamie Langan fired over and Cathal McCauley converted a free for which he had been fouled.

After that Carrigallen snatched a dramatic victory at the death when Marc Dolan converted a close-in free following a foul on Liam O’Rourke.