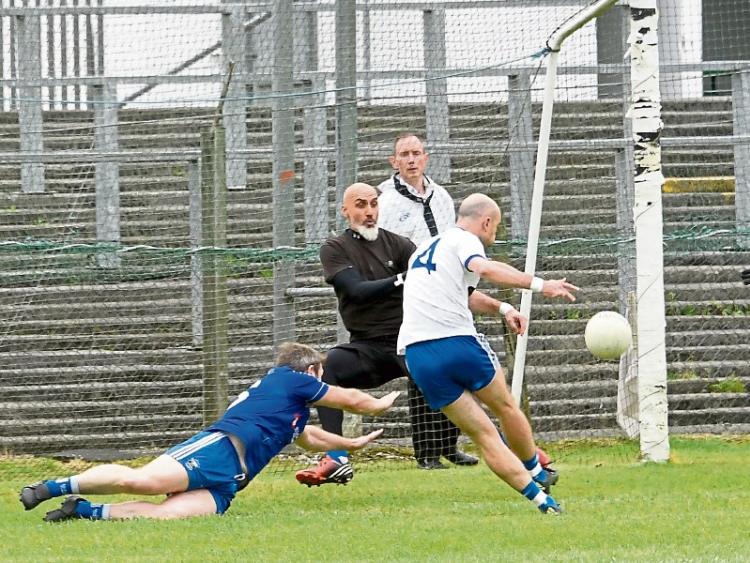 A good start is always half the battle and St. Mary’s certainly proved this on Sunday. St Mary's played an exciting brand of fast moving and quick-thinking football that made life exceedingly difficult for Melvin Gaels.

Melvin Gaels only really got to grips with St. Mary’s for a short spell coming up to halftime when they managed to turn the tables briefly on their rivals and take the lead for a short period.

But St. Mary’s recovered to regain command of the game thanks to a well-worked Robbie Lowe goal, which changed the agenda back in the Carrick men’s favour.

St. Mary’s got off to a lightning start with Robbie Lowe planting the ball in the net after 90 seconds when he put through by Ray Mulvey while shortly afterwards Paul Keaney fired over also.

A shell-shocked Melvin Gaels settled a little when Emlyn Mulligan opened their account by converting a fifth minute free but Alan Doherty did likewise for St. Mary’s.

Darragh Rooney hit back with a 13th minute point. Prior to the game’s first water break, Alan Doherty whipped over another free after Daire Farrell was fouled and in reply Declan Clancy shot over for Melvin Gaels.

Robbie Lowe extended St. Mary’s lead with a free on the 20-minute mark but Melvin Gaels rallied over the next eight minutes to get on level terms and then take the lead for the only time in the game.

Three Darragh Rooney points, one from an advanced mark, as well as two Mulligan frees got Melvin Gaels level and after a good bout of attacking play, Rooney fired over to put his side ahead.

But the Melvin Gaels lead only lasted three minutes as David O’Connell put St. Mary’s on level terms after he shot over from a 31st minute advanced mark.

A quickly taken close-in free by Robbie Lowe a minute later led to some fast interplay and ended when the ball was returned to the unmarked Lowe enabled him to fire to the Gaels net while their defence was napping.

Ray Mulvey's point sent St. Mary’s in at the break leading 2-6 to 0-8 and within 55 seconds of the restart, Lowe increased the lead when he tapped over a free awarded for a foul on Daire Farrell.

Melvin Gaels responded with two Rooney frees but the Gaels then had Cillian McGloin black carded on the 37-minute mark and St. Mary’s increased their advantage with frees from Lowe (2) and Paul Keaney.

Before the second water break, Melvin Gaels were reduced to 14 players after Emlyn Mulligan was red carded and Robbie Lowe put Mary’s seven points ahead with a free.