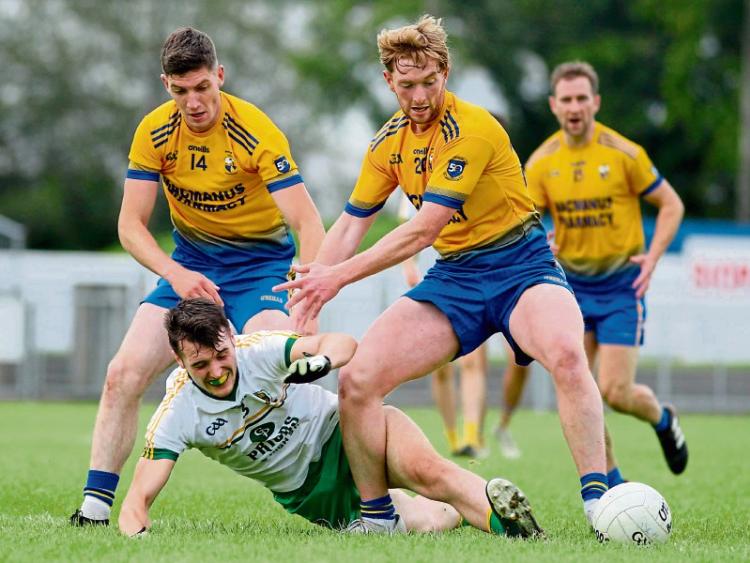 No escape for Ballinamore's Oisin McCaffrey as he is challenged by Glencar/Manorhamilton's Conor Dolan and Ruairi Sheridan last Sunday Picture: James Molloy

If there is a team that knows how to win Championship games, it is reigning champions Glencar/ Manorhamilton who again shut down a highly rated Ballinamore Sean O’Heslins side, this time in Sunday’s final Connacht Gold SFC Quarter-Final.

Glencar/Manor emerged as more convincing winners in Avantcard Pairc Sean Mac Diarmada over Ballinamore that the final score line suggests as their defensive wall and clever, quick attacking pace exposed a Ballinamore side who had entered the game as favourites.

The north Leitrim side played second fiddle to Ballinamore for most of the first half as they were almost completely shut out of the game by a dominant O’Heslin’s side in the first quarter but, like a cobra waiting to strike, the Manor side somehow managed to just get their noses in front just before the break.

And as Ballinamore repeatedly ran into dead-ends, turned over the ball and slowly but surely lost their way completely against a ferocious Glencar/Manor rearguard, the champions grew in stature, confidence oozing from their veins as they strangled the life out of a frustrated O’Heslins team.

Tom Prior drew first blood when hit over a Ballinamore point on the five minute mark. Prior again found the target two minutes later from an advanced mark after a well-placed long-range Wayne McKeon pass.

Ballinamore’s fast build up play from the back continued and the Glencar/Manor backs were experiencing a torrid time as they tried to cope with it. Dean McGovern won an eighth minute free and when Wayne McKeon tapped over the resultant free, he put his side three points ahead while Glencar/Manor had not fired a shot in anger in the proceedings so far.

But that all changed after Conor Dolan soled through from outside the 45-metre line in the 13th minute and fired over his side’s first point. In this play, Dolan prized open what had been a rock solid Ballinamore defensive set up.

Darren Sweeney shot a long range point and shortly afterwards, a foul on Niall Brady was punished by Conor Dolan, to put the side’s on level terms at 0-3 apiece just prior to the game’s first water break.

Ballinamore went back in front after Wayne McKeon tapped over a 20th minute free and six minutes later Mathew Murphy received a yellow card. Shortly afterwards a foul on Brian McDonald was punished by Aaron Hickey when he levelled the game for a second time.

Before the break, Conor Dolan again successfully evaded the Ballinamore cover to solo through from near midfield and whip over a point that put Glencar/Manor ahead for the first time and give them a 0-5 to 0-4 interval advantage.

A foul on Conor Dolan four minutes after the resumption allowed Glencar/Manor to increase their lead when Dolan put over the resultant free. Wayne McKeon pulled one back for Ballinamore two minutes later when he hit a placed ball over.

A long range 38th minute Paddy Maguire point heralded a final push by his side for victory and the demolition of the Ballinamore challenge. Over the next eight minutes, Glencar/Manor hit four more unanswered points that left them totally in command.

In this spell of dominance, Aaron Hickey fired over from a free and play while Brian McDonald and Niall Brady chipped in with a point each. Yellow cards were issued during this period to Ballinamore’s Shane Moran and Andrew Burns.

Shane Moran shot over a 53rd minute point for Ballinamore who had not scored for the previous 17 minutes but they were reduced to 14 players some six minutes later when Niall McGovern was straight red carded.

Conor Dolan shot over a 63rd minute point as he closed out the scoring in the game for his side but just before the final whistle, Ballinamore got a consolation goal when Tom Prior finished a dropping ball to the Glencar/Manor net from close range.