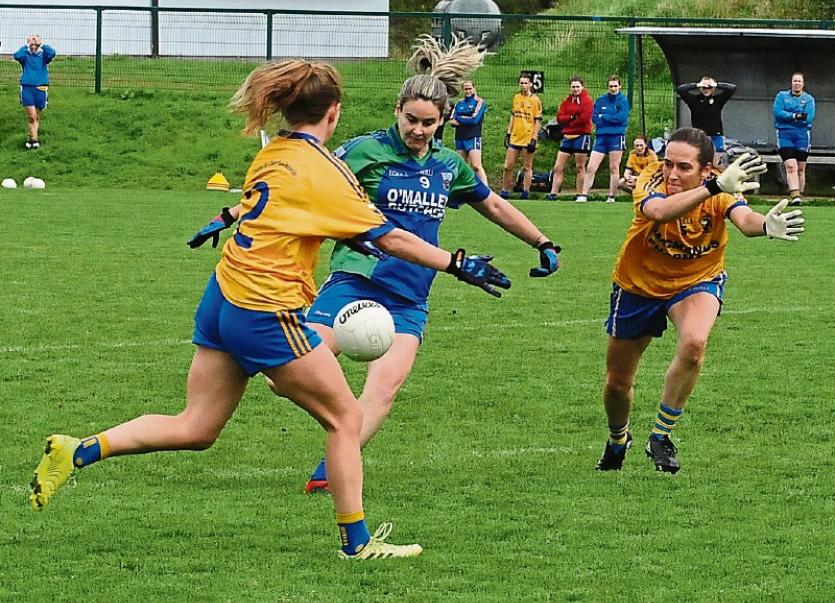 Twice in the last two years, Glencar/Manorhamilton had entered County Finals against St Joseph's as favourites only to suffer demoralising defeats and while this game was a semi-final, you got the feeling that victory last Sunday in Shane McGettigan Park was worth way more than just a place in the final.

In keeping with the nature of games between these sides over the years, this was a real arm wrestle of a game as both sides battled with immense zeal and ferocious desire but at the end of the day, what it came down to was what often separates combatants at the simplest point - Glencar/ Manor were far better at taking their chances than the defending champions.

The opening minutes typified the day's action. St Joseph's saw Bronagh O'Rourke hit the post with a shot for a point before Carmel McGovern dragged a shot inches wide of the near post with an unmarked teammate in front of the Manor goal, the sort of chance that McGovern normally buries.

First Manor attack a minute later and a goal! A long ball spilled by the defender was gratefully snapped up by Muireann Devaney who buried a spectacular shot in the net.

Two more goals would come from long balls as the north Leitrim would plunder goals at almost every chance while a resilient defence and the odd bit of cynicism stopped St Joseph's from getting the goals they desperately needed.

Normally when we talk of a Glencar/Manor victory, we highlight the roles of Ailbhe Clancy & Muireann Devaney and the duo were key figures again last Sunday but they were joined by a resilient defence where Mary Alice Maguire was a standout performer along with Rebecca Rooney and Emma McLaughlin.

Glencar/Manorhamilton successfully negated the impact of the Heslin sisters with Hannah Johnston a thorn in the side of Aine in the middle of the park, never allowing her escape her grasp while Mairead Clancy did likewise for Michelle Heslin, one cynical challenge late on leading to a yellow card that never threatened the eventual winners on their way to victory.

St Joseph's started off threatening to make an early breakthrough with Bronagh O’Rourke seeing a shot hit the post while a Megan O’Rourke pass intended for an unmarked Michelle Heslin was intercepted in the nick of time by keeper Cammie McPartland.

Those missed chances were emphasised when a long ball out of defence was spilled by a St Joseph’s defender, Muireann Devaney snatched the ball away and sprinted through to blast a rocket of a shot to the net after just two minutes.

Michelle Heslin played a quick free, gathered and fired over, Devaney replied but St Joseph’s missed a great chance to equalise when Carmel McGovern, with a teammate in space, blasted a goal chance inches wide of the near post.

It proved a costly miss for two minutes later, Glencar/Manorhamilton had a penalty when Eadaoin Clancy was fouled off the ball, referee Patrick Guckian awarding the spot kick which was sent powerfully to the net by Ailbhe Clancy.

Bronagh O’Rourke responded with a well worked point and then added a free but St Joseph’s saw two frees from O’Rourke go wide, Ailbhe Clancy also firing wide before pressure on the St Joseph’s kickout led to a turnover and another fine Devaney point.

Devaney put a free wide while Carmel McGovern had a goal shot deflected wide but Manor increased their lead with another solo effort from Devaney.

That came with six minutes left in the half as Glencar/Manor now led by six points. Incredibly, within two dramatic minutes, the teams were level and the game back in the melting pot.

First came a huge long ball from Michelle Heslin that deceived the defender but which was brilliantly caught low by Carmel McGovern. She ran in, dodged by a defender and drove low to the Manor net for an excellent score.

A minute later, Megan O’Rourke showed great strength to break the tackle and she fed the ball to Michelle Heslin who blasted the ball low to the net from about 20 yards.

Manor’s response was impressive with Ailbhe Clancy pointed what seemed like a very harsh free against Joseph’s, the ball moved in for dissent. Bronagh O’Rourke then saw a free hit the post with another free but she did convert a free as the game ticked into added time.

But in added time, Glencar/Manor crucially opened a gap - Ailbhe Clancy making a great catch before scoring and then profiting after Aine Heslin slipped following a throw-ball, the ball robbed from the St Joseph’s woman and quickly worked to Clancy for a point that left the north Leitrim side with a 2-6 to 2-4 halftime lead.

And Glencar/Manor did let up early in the second half - Siobhan McCartan made a brilliant block to deny Clancy a goal but Devaney followed up with a free. Ailbhe Clancy then followed up by blazing a goal chance wide on two minutes but Joseph’s also had the yips with O’Rourke & Heslin firing wide.

A goal did arrive six minutes after the break as a long ball went over the head of a St Joseph’s defender and Ailbhe Clancy was never going to miss such a gift, blasting home for her team’s third goal.

The game was become quite fractious with several St Joseph’s players needing lengthy treatment while selector James Boyle was banished from the sideline after complaining about a heavy challenge that escaped censure.

Glencar/Manor applied the final killer blow midway through the elongated half with Ailbhe Clancy playing a free across the park to an unmarked Aoife Gilmartin and her long range shot from 25 yards flew low to the net to leave Manor nine points clear.

Sub Celine Shortt collected a quick free to fire over and then had a shot saved by McPartland at the expense of a fifty. Bronagh O’Rourke did convert a free eight minutes from time.

St Joseph’s were putting huge pressure on and they looked on the way to a breakthrough when the ball was played over the top to a charging Michelle Heslin who was then cynically dragged to the ground by Mairead Clancy who earned herself a yellow card and a free for Bronagh O’Rourke to convert.

That reduced the gap to six points with less than six minutes to go but it was as close as they would get, Devaney lifting the pressure with a brilliant point after a good run. St Joseph’s started to run out of steam as Glencar/Manorhamilton clogged up the defence and blocked the path to goal time and time again.

Leah Fox scored a nice point over five minutes into added time and despite Louise Maguire scoring a point for a defiant St Joseph’s, the final coup de grace came after 40 minutes of the second half, a breakaway seeing Clancy play the ball to sub Siobhan Feely for an easy match sealing goal.