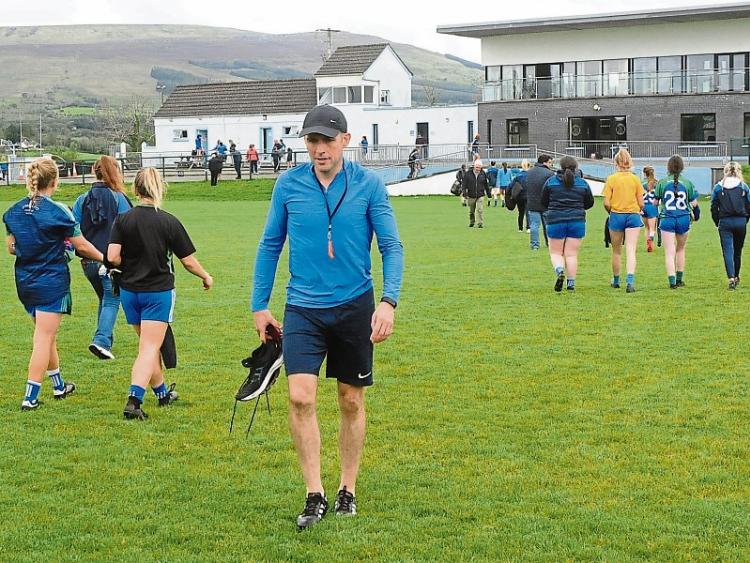 Relieved, happy, proud but most of all impressed: Those were the over-riding emotions Pauric Corrigan spoke of after seeing his Glencar/Manorhamilton Ladies team finally overcome bogey side St Joseph’s last Sunday.

A 5-9 to 2-8 victory over the three-in-a-row champions might seem comprehensive but in a game much closer than the scoreline suggests, the Glencar/Manorhamilton manager was thrilled with the way his players stood up as leaders under fierce St Joseph’s pressure.

“I’m so impressed with the way the girls, every one of them stood up as leaders, it didn’t matter what the age,” Pauric told the Observer, “Some times in the games before this, we’re looking to the likes of Cammie and the Senior players for leadership but every one of them have stood up today.”

Such is the rivalry between the two teams that the manager never allowed himself react until the Manor women went seven points clear in injury time: “It was a battle and you know with St Joseph’s, they always come back. I think we were two goals up and Muireann or Leah got a point and that was the only time I felt comfortable and that was with five minutes to go.”

His admiration for the former champions is clear: “They’ve beaten us the last two years in finals, they are the standard bearers but we have been getting close to them. They beat us by five points two years ago, three last year and then we drew this year and that is what we’ve been telling the girls all the time, that’d we’re getting them.

“Hopefully that will be a big confidence boost to them but hats off to them, St Joseph’s are a super team, they’ll come back next year.”

The teams actually drew in the final game of the group stages just two weeks previously and Pauric admits the Manor brains trust spent a lot of time wondering about how to counter the strengths of the Aughavas & Carrigallen women.

“You probably notice we matched up person for person. There were more meetings with James, John, Kieran and myself over the last week where we talked about endless scenarios and we matched people to people and we stuck tight.

“The last day they got a lot of space in front, people didn’t know who they were marking because Ray did the whole rotating forward line but we weren’t going to fall for that this time.”

The joy and relief at finally overcoming St Joseph’s was palpable but Pauric was already stressing that the job is only half done for Glencar/Manorhamilton: “This team is coming but we’ve also been here before when we beat Kiltubrid in a semi-final after a great battle and there was a lot of euphoria but we didn’t follow it up.

“We have to follow it this year or today’s victory isn’t going to mean anything. Those past defeats are only good if we learn from them, I know it is a cliche but we have to learn from them.”

With last Sunday’s second semi-final Ballinamore Sean O’Heslins and Kiltubrid postponed due to a confirmed Covid-19 case affecting the Kiltubrid club, Pauric is not worried at all about a possible delay in playing the final: “If that is our problem, it is not a bad one to have. We’ll be ready if it is one weeks, if it is two, if it is six weeks, Manorhamilton will be ready. We can’t wait.”

Neither does he have any preference over who his team will face: “Kiltubrid are a seasoned team, Ballinamore are up and coming, they both of them will cause different problems for us. Ballinamore are a different team, they are a running team so we’ll just have to get our match-ups right again.

“But what we do is that we focus on our team a lot more than the opposition, what we can do and we can do a hell of a lot.”