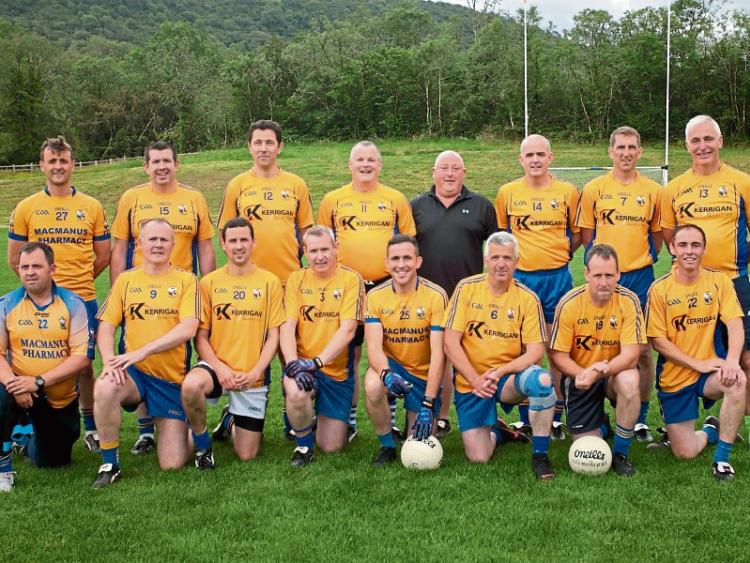 Glencar/Manorhamilton manager Sean Boylan (back row, fourth from right) pictured with his teammates who won the Leitrim Senior Championship in 1999 at the club's 50th anniversary celebrations

This might be his first time leading a senior team but Sean Boylan has been around long enough to know that you can’t beat the potent mix of youth and experience he hopes will carry Glencar/ Manorhamilton to victory over St Mary’s Kiltoghert next Sunday.

His first foray into Senior management has been a successful one as he has managed the daunting task of taking over from a championship winning management duo. But Sean is quick to pay tribute to those he is working with.

Paying tribute to both Aidan Rooney and Glenn Young who he worked with, Sean said “I’m looking forward to the semi-final but I have two great characters with me, Kenneth McMorrow and Sean Doherty from Kinawley, two brilliant fellas. Kenneth is a great clubman who won a club championship with us back in 1999 and has been great with the underage lads up through the years.

“Sean played for Fermanagh and has been involved with Fermanagh football at all levels during the years, he is a super fella so he is.”

Managing expectations is tough at a club like Glencar/Manor but an influx of new young players has meant a seamless transition: “There are always expectations in Manorhamilton but the first thing we said this year was we’d try to bring on a few new fellas, young lads because it hasn’t really been happening the last couple of years.

“Looking at our panel, some of them are getting on a bit and we lost Pat Gilmartin and James Glancy from last year’s team, two huge gaps to fill. But Peter Poniard, Gavin O’Hagan, Cian McManus, those lads are a huge addition and going forward that is what we’re trying to do, bring new lads in.”

That experience meant Sean was never worried when Ballinamore dominated the opening quarter of the quarter-final: “We wouldn’t be the fastest out of the blocks, it takes us a while to settle into games.

“Look at the Ballinamore game, the experience and workrate, the team ethic of never say die. these lads are on the march for the last 15 years, you can’t say enough about them, they keep going to the well day in, day out and finding something, they are just a credit to the club. They will go down in Leitrim club history as one of the best, certainly of their generation and a lot of generations.”

Strength in depth and injuries is a concern but Sean is hopeful his team will be at full strength: “It is all about strength and depth. If you don’t have strength in depth in this championship format, you’re going to be in trouble with injuries.

“We picked up a few injuries after the quarter-final, we had a look at them earlier this week and the news is positive in a lot of cases and we've got another few days to get them fit hopefully.”

A devastating full-forward line gives the champions huge options but Sean believes it is an all round team effort: “It is not just them upfront but the work we do all over the field, our half-forwards and half-back line, is a very important part of our game.

“It is a matter of trying to cut out the opposition, create space and create chances for them to take their scores. We have a load of different options. They are a great full-forward line, they proved it last year in the championship and they are doing it this year in fairness but it is the team performance all together this year, we’re not relying on three individual lads, we’re getting a lot of work out everybody.”

As for the opposition, Sean is wary of the challenge St Mary’s pose: “St Mary’s have a brilliant coach in Denis Connerton, he’s done it with a load of different teams and he has huge experience. St Mary’s are a good young team on the move. They are going to prove a huge challenge to us, we’ve got to look after our own wee corner and hopefully be a match for them on the day.”

But that won’t stop the champions from going in full of confidence: “There is no point going in with a fear, you have to respect St Mary’s for where they’ve come from after their first two championship matches, they’re going to fancy their chances.

“But if we didn’t fancy our chances, there’d be no point turning up. We’ll give it a shot on the day, it is going to be a tough battle but I’m looking forward to it all the same.”